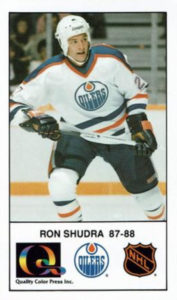 Ron Shudra dreamed of  becoming a Hockey professional, it came true in 1986 when the Edmonton Oilers drafted him.

Originally from Winnipeg in Manitoba, Canada, Ron was chosen in round 3 of the 1986 NHL draft by the previous season’s Stanley Cup Champions.
The Oilers with talent aplenty, hence Ron knew his NHL ice time would be limited, in fact when hearing of his draft his words were “oh no, not them”!
Ron Shudra played 10 times for the champions in 1987 – 88, including a couple of shifts with the ‘Great One’ himself, Wayne Gretzky.
Check out the points stats in the Oilers 1987 victory, 5 – 0 over the Buffalo Sabres and you’ll see:

Now that’s an achievement to be proud of, Ron went on to get 3 assists that evening.

The New York Rangers traded for Ron in 1989, unfortunately he didn’t get a game for the Madison Square Garden outfit.
Ron spent 2 frustrating seasons in the minors with affiliate clubs, Denver Rangers, Michigan and the Fort Wayne Comets
The Rangers GM, Phil Esposito offered Ron a new 3 year contract to keep in with the Rangers organisation.
However Esposito was then fired, new GM, Neil Smith, cancelled all contract offers, leaving Ron high and dry.
Consequently, at age 22 Ron Shudra looked for other opportunities, one was moving to Europe and in particular the UK.

In 1990 Ron flew across the Atlantic and signed for the Heineken Premier division’s Solihull Barons here in the UK.
The following season Ron signed for the new Sheffield Steelers franchise becoming their “go to guy”.
Little did he know that he was to become an integral part of one of the most successful teams in British Hockey history.

I asked Ron what was the secret for all of the Steelers success, his reply;

we were an experienced group who knew how to win, everyone was a leader, everyone played hard and focused.

It was certainly a good time to be a Sheffield Steelers fan.

Ron Shudra and me 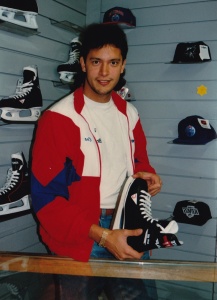 I first met Ron Shudra way back in 1993. I’d just opened up my first HockeyShop and had negotiated a merchandise deal with the Sheffield Steelers.
I received their stock on a ‘sale or return’ basis and took a small commission for selling it with no upfront costs to me.
As a result it was a win win situation, I sold Steelers merchandise and my own NHL and hockey gear.
The result of the deal meant that it established me as a retail sports shop business.

Consequently, as part of the deal, the Steelers would occasionally send over some of their players for promotions and shoots.
One day it was the turn of Ron and although I’d seen him play several times, I had absolutely no idea of his background or hockey pedigree.
One thing I did tell supporters was that Ron and I were twins, I’m 5ft 5″ he’s over 6ft!
I’m sure some believed me!

From 1999 to 2004 Ron made the decision to drop down a league to the BNL with the Hull Thunder and Coventry Blaze but returned to his beloved Steelers twice more before finally hanging up his skates at the end of the 2008 – 09 season.
After his retirement he joined the Sheffield junior development program at the twin rink facility of Ice Sheffield and in June 2014 became their head coach for that season.
In the 2016 – 17 Elite Ice Hockey League season the next Shudra generation took to the ice in the form of  Ron’s 18 year old son Cole, who made his debut for the Sheffield Steelers.
If Cole Shudra is only half as talented as his father, he will have an excellent hockey career.

Ron Shudra was honoured by the Sheffield Steelers in March 2010, his #26 team jersey being retired.
In the same year he was honoured once again when he was inducted into the British Hockey Hall of Fame.

The record crowd for a hockey game in the UK was achieved on February 23, 1997 when the Manchester Storm met the Sheffield Steelers in a SuperLeague game at the Manchester Arena.
The official attendance was a staggering 17,245, the Storm won the game 6 – 2.
Hear former Storm head coach Daryl Lipsey talk about that record breaking game.
Daryl was the only person to be with the team from start to finish (1995 – 2003).
His insights are very well worth listening to.

On this show I give a shout out to the guys at the Cats Whiskers Podcast, to hosts Jono, Paul and Aaron – keep up the good work guys.

and lastly…..
Jake the Border Collie is currently having lessons on how to keep quiet during a Podcast interview.

You can also have a read of my blog post on Ron Shudra, here: Mr Sheffield Steelers.