I think most bloggers will agree that the “About” page is second in importance only to regular content.
Visitors want great content but also want to know who it is that’s producing that content.
Knowing this I’ve been very slow in adding a post about myself. What do you tell visitors about who you are, what part of your Ice Hockey life do you add in and what do you leave out?

That being said, here’s my version, warts and all: 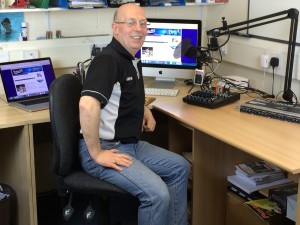 I’m Ken Abbott, I “discovered” Ice Hockey way back in the early 1980’s.
North American visitors please note, in the UK we also have Field Hockey so need to add the “ice” bit to differentiate.
A friend had a spare ticket, I joined him, taking my place sitting on a very long wooden bench. It was in block one in the old Nottingham Ice Stadium and became my new home from then on.

When looking back I find it fascinating how certain decisions turn out to be pivotal in life.
In 1984, the very same friend who I relied upon for my Panthers tickets transferred from his sales job in Nottingham to another branch, we were in the same industry, I was looking for a change, had the necessary experience and took over his sales position.
One year later a work colleague from the same company suggested we drive 25 miles north in to Derbyshire to meet the “boys” from the company’s Chesterfield branch for a drink (or three).

That night I met my wife to be and the future mother of my children, a very pivotal moment.
Fast forward two years, I had married and transferred from the Nottingham branch to the company’s rather run down depot in Sheffield where, as manager, I increased business by 800% over 5 years.

Then in 1991 came the World Student Games and the construction of the Sheffield Arena.
As an offshoot, a certain Ice Hockey team that was to take the UK by storm arrived, the Sheffield Steelers.
Hockey night in Sheffield was like no other, there was razmataz, there was glamour and there was glitz.
There stood this massive arena that, after just a few months, was filled to it’s 8300 capacity of rookie Sheffield Steelers fans
lapping up everything that the team could throw at them.

Then there was me, a fan of the Nottingham Panthers, the team that was soon to become “the enemy”.
I quickly realised this was a unique opportunity to do some business for myself in a sport that I loved.
By this time I had already done a little business with the junior development section of the Nottingham club, supplying hockey jerseys and I was keen to extend my business interests with the Steelers.
To cut a long story short I met up with the team’s GM and # 7, Ronnie Wood, we talked business.
From then on I supplied the Steelers with Baseball Hats, Scarves, Tee Shirts, Jackets and Replica Jerseys, even Puzzles.
Ronnie Wood asked can you source this or can you get that and I’d say sure, leave it with me. 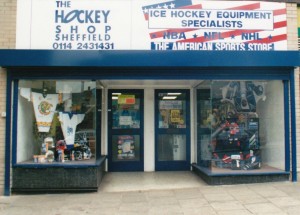 Do I open my own hockey shop?
By the end of the first season the Steelers wanted to clear their remaining stock by having a sale. One Steelers fan, Les, owned a Motorist Discount shop and offered the use of his empty upstairs room.
Les, I’ll be forever grateful to you for that!
The sale started at 10am one Sunday morning.
Stacks of fans queued up outside waiting to get in, was this when the shop idea started, absolutely!

It didn’t take much to realise that the city of Sheffield had become a hockey town. My instincts told me that some Steelers fans would want to emulate their ice heroes and take up the game.
That meant an increase in demand for skates and other equipment required to stay protected on the ice.
By the start of the following season I had quit my full time job and Sheffield’s first HockeyShop had opened.
I spent the first three months in Les’s upstairs room before moving in bigger premises.
We sold all Sheffield Steelers merchandise, ice hockey skates, sticks and protective equipment plus NHL replica jerseys and merchandise.

After establishing the Sheffield store I moved quickly to open the Altrincham HockeyShop in Manchester and in late 1997 opened my third hockeyshop in Nottingham, I was going home.
I was my own boss and working in a sport that I absolutely loved, it couldn’t get any better could it – actually life took a dramatic downturn when in October I sold off my business and just a month later my first wife Maggie lost her battle with breast cancer, leaving me with my two young daughters aged three and eight.
To be continued…