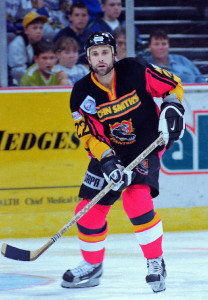 Paul grew up in Montreal in Canada, he remembers his early years playing hockey on the outdoors rinks,
he recalls;

You’d cover your face with a scarf, wear thick gloves
and a heavy coat and go out and play hockey all night

After three seasons in the Quebec Major Junior Hockey League, Paul moved on to the tougher International Hockey League.

In those days you had to look after yourself, in my first season I put up some real good numbers but had quite a few fights too.

After three seasons in the IHL he decided his best option was to go to Europe;
in his own words,

Make some real money for a change

So in 1987 he signed for Briancon in south eastern France. He enjoyed a successful season, the team unexpectedly making the play off finals, eventually losing out in a dramatic shootout. 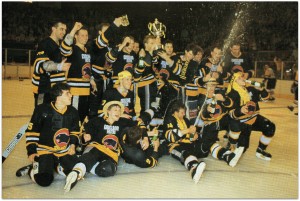 In 1988, Alex Dampier, coach of  the Nottingham Panthers, was looking to replace an import forward, Paul had intended to return to Briancon but contract talks had stalled and so Paul moved to Nottingham.
That season with teams allowed only 3 imports Paul slotted into the team very well, scoring 153 points (82 + 71), rushing D Man Darren “Doc” Durdle and Captain Terry Kurtenbach completed the trio.
Home grown youngsters such as Jason Martin, Stewart Parker, Simon Perkins and Nigel Rhodes were all living up to their potential and the scene was set for a very memorable climax.
As Paul remembers “no one expected us to win the Heineken Playoff Championship at Wembley but as a team we just got better and better as the year went on” 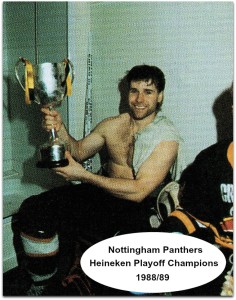 Paul finally left the Panthers in 1999 after 11 seasons, 612 games, 828 goals and 781 assists. A few years later, in 2003, the club honoured him by retiring his #22 jersey.
After leaving Nottingham Paul spent a season playing in Italy with Milan, he then found himself back in very familiar territory as former Panthers coach Mike Blaisdell, who was now the head coach of the Panthers greatest rivals, signed him for the Sheffield Steelers.
That season, 2000 – 2001, the Steelers, despite worrying financial problems, swept the board by winning all four trophies, it was then, at the end of that season that Paul decided to retire “go out a winner, rather go out on a high than a low” he says.
Coincidentally that Grand Slam Championship team consisted of eight former Nottingham Panthers players, including Paul and Coach Blaisdell – just saying.

Coaching was high on his “to do list” and after approaching the Panthers GM, Gary Moran, Paul became co-coach of the Panthers with veteran coach Alex Dampier.
After Alex left at the end of the season Paul stepped up to become Head Coach, culminating in an historic Challenge Cup win over the Steelers in the 2003 – 04 season, the Panthers first victory in seven cup final attempts against their fiercest rivals.

Paul went on to coach in Italy and Switzerland before returning to the UK last season to guide the Belfast Giants to an emphatic Elite League Championship winning title.
Although coaching jobs have been offered Paul is currently working in Media for Notts TV and Premier Sports.

In this episode I give a Shout Out to Matt McWilliams who kindly left a 5 star iTunes rating and review and also to regular listeners Colin Grubb in Texas and Scott Campbell in Glasgow together with Chris Hallam who worked out all of the clues on our Facebook page to correctly guess this episode’s guest.

You can also listen to Podcast interviews from Paul’s alumni of former Nottingham Panthers players: