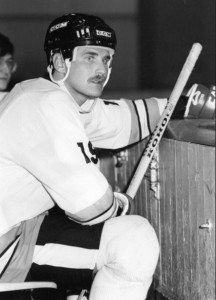 Fred was unexpectedly drafted by the Toronto Maple Leafs in 1980. On “draft day” he was actually digging in a ditch. A passing motorist, listening to the draft, told him that the Toronto Maple Leafs had selected him in round 8.
The following year Fred made history by scoring for both the Leafs and second team Marlies in the same day. In one afternoon he scored 3 goals for the Toronto Marlies and in the evening scored again for the Leafs.

After 5 seasons in the AHL and just 8 NHL appearances for the Maple Leafs, Fred became a little disheartened.
As a result he decided to try his luck in Europe. Unfortunately a lucrative contract to play in Italy fell through leaving Fred high and dry.

“Come to Nottingham, it’s not the NHL or AHL but you’ll have
some fun playing again”

With the deal done, Fred became a Nottingham Panther and helped his new team win the Autumn Cup. It was Nottingham’s first silverware since reforming in 1980.
Fred had a record breaking season, playing 45 games, scoring 108 goals with 104 assists for 212 points.
As a result Fred probably became the first Panthers legend since their reformation 7 years earlier.

I never wanted to leave Nottingham but Fife offered to double my wages,
it was an offer I simply couldn’t refuse.

However, Nottingham tried hard to keep Fred, especially team manager Tony Johnson who made every effort to keep him in Nottingham. Unfortunately it wasn’t to be and he signed for the Fife Flyers for the 1987 – 88 season. Fred joined up with fellow quality Canadian imports Al Simms and Steve Moria.
Subsequently the Flyers had a successful season with the team finishing 3rd in the Heineken British Hockey League.
The Fife fans also enjoyed an incredible playoff cup run. With Fred’s help they topped their Playoff quarter final group, winning all four games to make the Wembley Finals Weekend.

As a result they met the Whitley Warriors in the semi final, winning 13 – 5.
Likewise the Wasps had defeated League Champions, the Murrayfield Racers, 11 – 8 in the other semi final.
Consequently the Flyers met the Durham Wasps in the Heineken Playoff Final. However, despite Fred’s best efforts, a fairytale ending was not to be. Durham raced into a 4 – 2 first period lead and eventually ran out 8 – 5 winners. Fred and his Fife Flyers team were Wembley Play Off Finals runners up.
As a small consolation, Fred finished as runner up in the Championship scoring table. He scored 20 goals and 14 assists for 34 points, 5 points behind team mate Steve Moria (13 + 26=39). 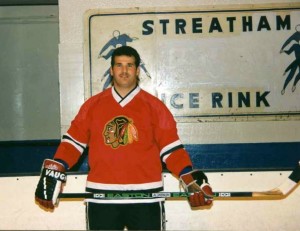 By the following season, the Flyers decided to trim their import costs by bringing in players from Czechoslovakia.
As a result Fred started a 7 season run of clubs that included Deeside, Trafford, Blackburn, Telford, Streatham, Basingstoke and Lee Valley.
He recalls;

I think I had as many clubs as a golf club bag.

In 1994 Fred gained his British passport, and signed for the Guildford Flames, linking up once again with fellow dual national and former Panthers Captain Terry Kurtenbach.
Consequently Fred, now with a young family, finally achieved the stability he was looking. The Guildford Flames owner, Canadian CEO of Morgan Stanley, John Hepburn, signed him to a 3 year contract.
As a consequence, not only would he play but he would also help behind the scenes with coaching and business.
After 3 successful years as a Flames player, Fred retired to take up the position as head of the Guildford Junior Programme, a position he then held for the next 10 years. Of that time he says.

It was the most fun I’d had and after making a living as a player for 10 years,
it felt really good to give back.

However, in 2007 the Perlini family returned home to North America. His boys were developing into very good hockey players and wanting to further their careers and follow their hockey dreams. Fred also formed his own business helping to develop Elite League and Pro Hockey players in North America.
As a result, both sons followed in their father’s footsteps by being drafted by NHL teams. Subsequently Brett was selected in round 7 (192nd overall) by the Anaheim Ducks in 2010. In addition, in 2014, Guildford born Brendan was selected in round 1 (12th overall) by the Phoenix (now Arizona) Coyotes.
There is absolutely no doubt that this is a true hockey family.

Awesome Podcast bringing back happy childhood hockey memories,
a must for any UK Hockey Fan”

Are you enjoying these Podcasts?
Would be able to leave a rating, preferably a 5 star rating and review on iTunes for me.
Reading your reviews gives me a great boost.
As a result of your review it’ll help the Podcast get found by others.
All 5 Star reviews get a shout out on the Podcast.