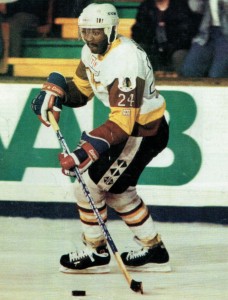 We talk of his early years growing up playing ice hockey in Montreal and his foray over to mainland Europe.
He describes his arrival in Whitley Bay after signing for the Warriors in 1988.
He recounts how both he and fellow import Mike Rowe ended up falling on their bums while being introduced to the press as the teams new imports. 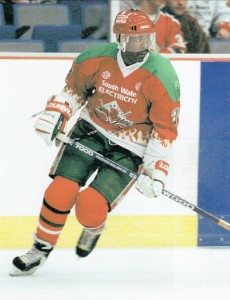 Hilton played for the Warriors for four seasons before leaving Whitley Bay.
After brief stop overs with the Solihull Barons and Murrayfield Racers “homie”
signed for John Lawless‘s Cardiff Devils.
He enjoyed three highly successful seasons playing for the Welsh club, winning a host of trophies, including “The Treble” in his first season and scoring over three hundred goals in those three campaigns.
Hilton also tells how Shannon Hope gave him his “Homey”nickname, a name that still sticks with him today.

In the summer of 1995, Hilton asked new Manchester Storm, former Devils boss, John Lawless to sign him, he explains;

The Storm was a brand new team, that appealed to me plus I was still living in Whitley Bay and I figured Manchester was two hours away from home, Cardiff was six hours away, it was a no brainer. 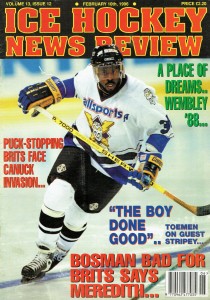 On the cover of the Ice Hockey News Review

John Lawless made him wait another two weeks before signing him for the Storm.
However he didn’t disappoint, scoring 112 goals in just 51 games.
That season the Manchester Storm won the British League division one championship at their first attempt.

Hilton also tells the story of how he ended up having his photo taken while outdoors, dressed in full kit (minus skates) high up on a ladder.

The team was so popular that the Manchester Evening News chose to promote us over the likes of Manchester United and Manchester City, they asked someone who their favourite player was and suddenly my face is popping up on billboards all over Manchester! 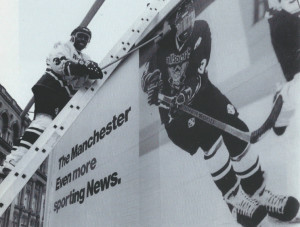 After three great seasons in Manchester with the Storm it was time to move on once more, the team had had it’s ups and downs, had replaced head coach John Lawless with ECHL team Raleigh Ice caps former head coach, American Kurt Kleinendorst, changes were on the way and the writing was definitely “on the wall” for Hilton, as he explains:

My three year contract was up, I was thirty four years old, and I knew the coach wasn’t going to sign me up again, it was time to go home.

Back to the North East

So, in the summer of 1998 Hilton moved on, returning back home to his adopted Newcastle where he signed for Alex Dampier’s Riverkings.
After moving to the Newcastle Riverkings he spent the next two seasons on Tyneside before moving on again, this time to the Midlands to join the fledgling Coventry Blaze in the British National League (BNL).
He had four enjoyable seasons with the Blaze, on the ice and in the back office as commercial manager, then with customer relations, helping them progress from the British National League (BNL) to become integral members of the Elite League.
Time passed quickly and the lure of the North East became too strong, Hilton chose to return once more to Newcastle where he spent one last season with the Newcastle Vipers before finally hanging up his skates for good in the summer of 2005.

I felt I’d had enough by then, the fun had started to go out of it, it was getting hard and I was ready to call it a day.

I asked him, after seventeen seasons playing hockey in the UK,  if he ever missed the game, his reply was not something I expected but to find out what it was you’ll have to listen to this Podcast episode.

You can listen to Podcast interviews from Hilton’s’s alumni of former team mates here: 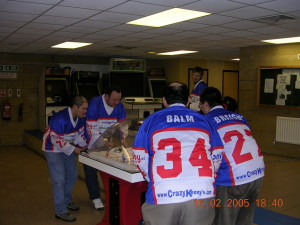 A big Shout Out goes to Jono Bullard, Paul Balm, Adam Reddish, Mark Atkin, Mark Balm and Ian Braisby.
These were the guys behind the “Rink Rush” team of 2005.
These guys visited every UK ice rink that hosted senior hockey. Their journey took a week to complete and raised over £13,000 for Cancer Research.

Ten years on, the guys have decided to mark the occasion by bringing out an E-Book filled with hockey stories.
Written by Hockey fans from across the UK, the book will be available to download on Amazon.
Do you have a story to tell, most hockey fans have at least one, probably more. If you do the guys would love to hear from you.
For more information, visit the Rink Rush website at The Rink Rush

However, there is a deadline of 31st October 2015 – once again here’s the link:  The Rink Rush 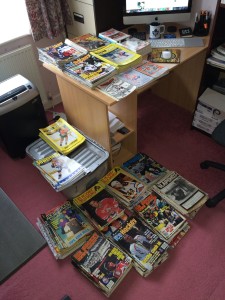 My second Shout Out goes to Colin Liddle of Billingham.
Colin kindly entrusted me with his collection of Ice Hockey News Reviews, Powerplays, Ice Hockey Annuals and other magazines. These are all extremely useful to me as research material for my Old Time Hockey UK interviews.
Thanks once again Colin, it is very, very much appreciated, your collection is in good hands.

My last Shout Out goes to the following quality Hockey Podcasts:

All the above are available on iTunes.

Lastly, once again I reveal my guest for the next Podcast, episode 25.
So, if you want to know who, you’re just going to have to listen to this Podcast episode.