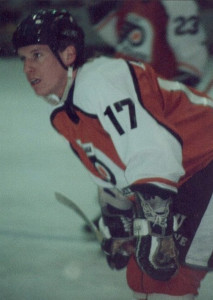 Kenny first “discovered” ice skating as a 10 year old, he’d persuaded his 16 year old brother to take him to the Crossmyloof ice rink, his brother had arranged to meet a girl there and 10 year old Kenny threatened to “tell his mum”.
Once there he was hooked, took to the ice right right away and became a very good skater.

The rink was a dump, but it was our dump,
plus at 237 feet x 107 feet the ice was so big you had to be able to skate,
that helped a lot of us progress to become really good skaters.

At 11 years old Kenny joined the Glasgow Vikings junior ice hockey team. Apparently the only reason they were named as such was that the team strip they had acquired had “Vikings” on it.
He also tells us of how, during one festival period, the team had to skate around a Christmas tree, positioned at centre ice, as the winch for raising it up and out of the way had broken. There were pine needles everywhere remembered Kenny with a laugh!

Progressing through the Glasgow ranks, playing for the first team Dynamos and then the Great Britain U18 team, Kenny, now an apprentice joiner by trade, decided that a move away from Glasgow might be just the sort of lift he needed.

A conversation with then Nottingham Panthers supremo, Gary Keward, gave him the opportunity to do just that, and so he moved south to join the East Midlands club – the year was 1982. He fondly recalls his time there:

My first Panthers game was at Billingham, we arrived back at 1am to the Ice Stadium,
fans were already queuing up for tickets, it was unbelievable,
in Glasgow we had to throw people in to try to get a crowd!
That evening I skated out to 2500 screaming fans, it was incredible,
we won 12 – 1 and I scored the last goal.

Kenny also tells of how Panthers forward Dwayne Keward introduced him to his pre game meal, a “Big Mac Meal”, I’d never had one before, Kenny explains, as at that time, there were no McDonalds in Glasgow – can you imagine that now!

We talk of how and why he left the Panthers. Kenny tells how he considered moves to Solihull and also Streatham.
However, a summer coaching job at a Peterborough hockey school convinced him that his next stop should be the Peterborough Pirates.
It was a really good choice as Kenny stayed with the East of England club for the next 11 seasons.

We share Kenny’s most memorable experiences playing for the Pirates and talk of coaches Ron Katernuk, Garry Unger and Rocky Saganiuk plus players Doug McEwan, Trent Kaese, Todd Bidner  Danny Shea and Scott O’Connor, all great characters in their own right.

Kenny eventually returned to Glasgow and after a season with the Paisley Pirates hung up his skates for the last time, I asked the question “how did you feel when it was all over?”

What they don’t tell you when you hang your blades up is
how gut wrenching and awful it is to go watch a game.

We conclude an enjoyable interview when Kenny shares the one thing that he still really misses about the game. To find out what that is,  you’ll just have to listen to the show!

Kenny and his family are regular visitors to the Braehead Arena and are self confessed “Clan fans”.

In this episode I give shout outs to:

and the following Podcasts

Lastly, I reveal my guest for the next Podcast, Episode 26.

You can also listen to Podcast interviews from Kenny’s alumni of former Nottingham Panthers and Peterborough Pirates players: