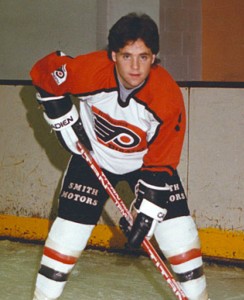 In this episode I interview former Peterborough Pirates, Cardiff Devils, Manchester Storm and Telford Tigers player and coach, John Lawless.
We discuss why he chose the Peterborough Pirates over the more established Nottingham Panthers. We also talk of the successes of the Pirates plus the various characters that played during that time.

In 1986 John left Peterborough to become player coach of a new team in Cardiff, called the Devils.
A new Wales National Arena rink had been constructed and by Christmas the place was rocking. Construction delays prevented any hockey in Cardiff until late November. However, it was well worth the wait as the new Devils hammered the poor Ashfield Islanders 32 – 0.

Promotion quickly followed and John recalls the first season in the Heineken Premier division.
Cardiff were expected to struggle, most newly promoted teams did in those days but the Devils had other ideas.
With players the calibre of Shannon Hope, Ian and Stephen Cooper, Steve Moria and Doug McEwan they stormed the league.
By the end of their first Premier League season, incredibly, John Lawless’s Cardiff Devils were League and Playoff champions.

John is rightly proud of the successes he helped achieve in Cardiff but his proudest moment I believe is the success his team achieved in competing with the very best teams in Europe
They were  the first British team to get to the semi finals of the European Championship in 1993. 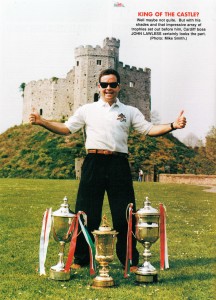 After 9 successful seasons John tells of how, after losing in the 1995 Playoff Championship semi final, his disappointment was transformed by an offer he couldn’t refuse.
He was approached by an Ogden Entertainments executive , the owners of the new Manchester Hockey franchise.
Ogden’s offered him the job of becoming the teams new player coach.The team, soon to be named the Manchester Storm, were to play in the new £56 million Nynex Arena.

A highly successful first season followed with the team winning the league and gaining promotion.
John tells how, with the inception of the new SuperLeague, things started to go wrong even before the first faceoff.

We conclude the show by talking briefly of his time with the Telford Tigers and of his reunion when the Cardiff Devils celebrated their 25th anniversary back in September 2011.

You can listen to Podcast interviews from John’s alumni of former Cardiff Devils and Manchester Storm players:

I  give a shout out to “Giby” for his iTunes 5 star rating and also to Telford Tigers owner Wayne Scholes and apologise for forgetting his last name when discussing the new Tigers ownership with John Lawless.