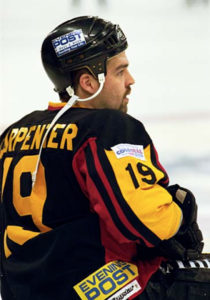 Steve had a successful time in Canadian junior hockey and in the East Coast Hockey League. He recalls flying into the UK to sign for the Solihull Blaze after a recommendation from an old friend.
He explains;

He arrived into Gatwick planning to spend just one season in the UK before retiring from playing.
He intended to take up a coaching position back home, in the end his UK adventure lasted nine years!

We talk of the characters of the Blaze team, including coach Paul Thompson, Les Millie, Justin George and Kurt Irvine. Of a season that promised so much but ended with financial problems and of fans bucket collections to try to make up for Steve and the other imports’ unpaid wages. 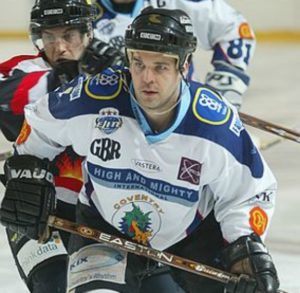 At the end of the season, Steve moved to the East Midlands to join best friend Greg Haddon. He signed a three year contract with coach Mike Blaisdell’s Nottingham Panthers.
Steve enjoyed three really successful seasons in the Lace City. The Panthers went on to win the Norwich Union Cup and finished runners up in both the Superleague and the Challenge cup (twice).

At the end of his contract Steve moved a few miles up the motorway to join his old coach Mike Blaisdell in Sheffield.
“Blaiser” had parted company with the Nottingham club earlier in the season.
Now his new Sheffield Steelers team, bitter Panthers rivals, were about to become a team that was to conquer all.
Despite financial problems hitting them hard in mid season, they still went on to become Grand Slam Champions of 2000 – 01.

It’s all your fault Steve Carpenter

It was a season both Panthers and Steelers fans would never forget. Not only were Sheffield Champions but the team also took part in the infamous “Battle of Lower Parliament Street”.
Steve talks of how and why many Nottingham Panther’s fans still think he was responsible for the bench clearance.
He explains, in detail, why he wasn’t! 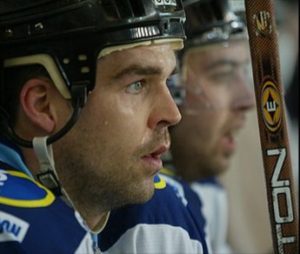 By the end of the season it was time to move on and once again. He chose, once again, to link up with friend and former coach Paul Thompson, now with the Sheffield Steelers.
Honours were soon to follow, the Blaze went on to win a League Championship, a Playoff Championship and finished runners up on four other occasions.
He also tells of how late training times at Coventry led him to fill his days volunteering at a local Coventry school, which developed quickly into a teaching assistant post and then lead him into a full time teacher training course.
It was a career changer as it put him on the road to becoming firstly a full time school teacher in Coventry and now a deputy Principal at an Elementary school back home in British Columbia.

Due to ever increasing teaching demands Steve decided to leave Coventry at the end of the 2003 – 04 season and with the help of former Solihull team mate, Kurt Irvine, dropped down to a lesser demanding league and joined the Milton Keynes Lightning.
Once again success was to follow and as Steve decided to make this his last season before retiring, his new team went on to win both the League and Playoff Championships, it was a fitting end to his UK hockey career. 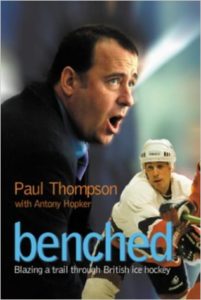 Shout Out
My first Shout Out goes to Guildford born Brendan Perlini.
Brendan, the son of former Toronto Maple Leafs and Nottingham Panthers forward Fred Perlini, recently made his NHL debut and scored his 1st goal for the Arizona Coyotes.
Fred predicted he’d make the NHL when I interviewed him in Series 1 episode 20.
So, here’s to a long and successful NHL career. Well done Brendan.

My second Shout Out goes to former Solihull & Coventry Blaze coach Paul Thompson.
The current Sheffield Steelers coach published his book Benched: Blazing a trail through British Ice Hockey.
I thought it was a really good, insightful read and although it’s over 12 years old, copies are still available on Amazon and eBay.
I’d thoroughly recommend it

You can also listen to Podcast interviews from Steve’s alumni of former Nottingham Panthers players: