Welcome back to Part Two of the Stephen Cooper interview.
If you haven’t already listened to Part One, go have a listen now, you’ll enjoy this episode that much more. 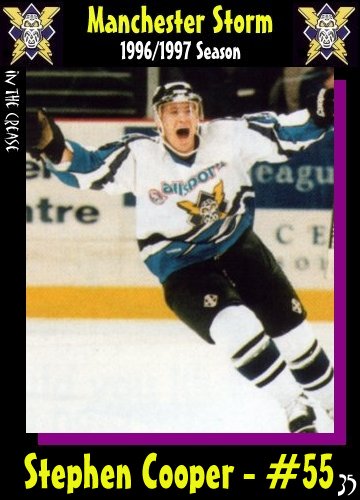 In the summer of 1997, former Devils coach and then Manchester Storm supremo John Lawless saw that Stephen’s contract talks with new Cardiff owner, David Temme had stalled.
So John quickly made contact and “sold” his club to Stephen. The Storm had acquired the best British D-Man in the game.

Stephen spent two very enjoyable seasons in Manchester, the team finishing runners up in his second season. In the summer of 1998 he was looking forward to signing a promised new contract. However coach Kurt Kleinendorst reneged on his contract promise, giving him little time to find a new club.

Despite being left high and dry by the Storm, Stephen returned home to the North East and signed for the Newcastle Riverkings.
However the team struggled continually and finished the season second from bottom.

Nottingham coach Mike Blaisdell, a former Durham Wasps team mate of Stephen’s, saw him as a key cog in his plans for his team Panthers.
So, in the summer of 1999 he readily agreed to join Mike in the Midlands.
Unfortunately after only 10 games Blazer departed for Sheffield and was replaced by former Panthers coach Alex Dampier.
What looked to be a season of promise stuttered along to a disappointing end and Stephen moved on. 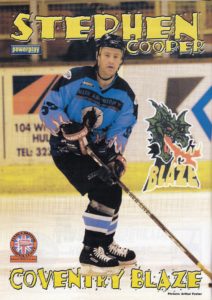 A split 2000 – 01 season was to follow, first with the Hull Thunder. The BNL team had built an impressive squad of seasoned players, intent on a having a crack at the Championship. Players of the calibre of Ron Shudra, Tommy Plommer, Anthony Payne, Corey Lyons and Aaron Caine had been signed. Initially the team did very, very well and lead the table.
However money problems hit the club, players wages were continually late and cheques started to bounce. Consequently players became unhappy and eventually Stephen’s patience ran out and he accepted an offer to join Coventry.
It was a good move, coach Paul Thompson was building a team to compete with the very best. This was highlighted the following season as the Blaze finished as runners up in the League, Playoffs and Challenge Cup. Only Tony Hand and his Dundee Stars stood between them and glory.

At the end of the 2001 – 02 season Stephen decided to retire, he’d had a stellar 21 season career. During that career he had been award the Alan Weeks trophy, for best British defenceman, a staggering 8 times.
He also played 61 times for the Great Britain national team too.

The following season the Coventry Blaze decided to honour Stephen. They fittingly chose a Blaze versus Cardiff Devils game to retire his number 55 shirt.
As Blaze coach Paul Thompson explains in an online article given to Coventry live;

The main reason is not just the great effort he made for us, but the fact that he has been the
defenceman of his generation.
It’s incredible to think that he has been the best for the last 16 years.
We are retiring his shirt as a tribute to his career.”

You can read the full article here.

These days Stephen lives with his wife and children in Cardiff and works in the retail motor car industry.
Thanks for the memories Stephen.

You can also listen to Podcast interviews from Stephen’s’ alumni of former team mates here:

Thanks for your continued support guys.