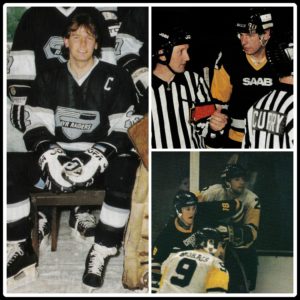 We talk of John’s early years learning his hockey trade on the small Ayr curling rink that was Limekiln Road. It’s dimensions a mere 154ft x 88ft (46m x 25m) compared to a regular rink size of 200ft x 100ft (60m x 30m ).
It certainly gave the home team a distinct advantage.
After coming up through the Ayr Academy Juniors John made his Bruins debut during the 1980-81 ice hockey season, aged 17.
He played 24 times that season, gaining 5 points with 3 goals and 2 assists.

There were 4 to 5 of us that used to make up the numbers when the older guys
didn’t fancy away games to the likes of Durham, Whitley Bay or Cleveland

It was a really good learning curve for John and those venues were certainly character building. The downside, a 4 to 5 hour each way coach journey!

We discuss local entrepreneur Glen Henderson and talk of the, seemingly, never ending saga, of his Centrum Ice Arena.
John talks of the excitement when Henderson became the owner of the Ayr Bruins.
However we also talk about the huge disappointment when the Henderson business empire collapsed in late 1990. 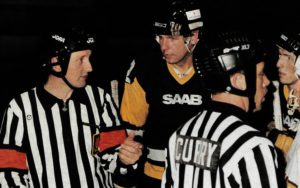 Glen Henderson’s ambitions for the club were undeniable. He intended to make the Bruins the best team in the UK.

One of the best players and coaches ever to come to this country.

The former NHL forward guided the Ayr Bruins to their very first Wembley Championship final appearance in April 1989. It was an occasion that John will never forget.

John talks of how his team got to Wembley that year by taking the 6th and final playoff spot;

People thought we’d be the whipping boys but we made Wembley.
We then took on the grand slam chasing Durham Wasps in the semi finals.
We beat them 12 – 6 to make the final.

In the Championship final the Bruins faced Alex Dampier’s Nottingham Panthers, victors over Whitley Warriors in the other semi final.
John recalls;

We were designated as the home team, I was lucky enough to be the team captain and as such
was the first player onto the ice, it was an unbelievable atmosphere.
I’ll never forget it.

At 8.54 John opened the scoring, the Panthers levelled to end the first period 1 – 1. The teams scored 2 each in the second period and went into the third period tied 3 each.
Unfortunately the Bruins seemed to run out of steam and the Panthers scored 3 goals in that last period.
The final score was 6 – 3 to the Panthers and the Heineken Playoff Championship trophy was Nottingham bound. 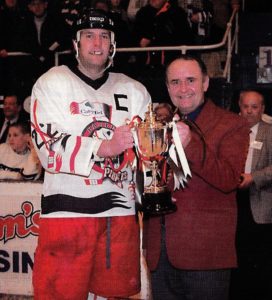 However much was expected in Ayr for the following season. The team was re-branded as the Ayr Raiders with a brand new Black, White and Grey kit. All 3 imports were retained and new British players were brought in.
Unfortunately poor form and injuries to key players lead to a disappointing season and the team failed to make the playoffs.
At the end of the season coach Rocky Saganiuk decided to move on.

We move on to discuss the sad demise of the Ayr club over next few seasons, including:

He reveals why, right after Ayr’s demise, he decided to move south to England, to join the Peterborough Pirates. He also recalls receiving a serious eye injury in Peterborough a few seasons earlier, from one of his own team mates!
Unfortunately, the East of England team’s finances were also very shaky. At the end of the season John returned to Scotland and signed for the Paisley Pirates.

John spent 4 very enjoyable seasons with the Pirates. The highlight being winning the Scottish Cup, in Kirkcaldy, against the home team Fife Flyers. John recalls;

The Paisley scorers, former Fife Flyers players Dean Edmiston and Ian Robertson scored 3 each and John scored 2 + 2.
It was a huge game for the Pirates, it was a really terrific night.
After 4 memorable season with Paisley John chose to hang up his skates and retire.

It was then 2 seasons for John back in Ayr at the finally opened Centrum Ice Arena. He’d accepted a job coaching the Ayr Scottish Eagles SNL team and finally got to skate on Centrum ice.
However, Paisley called again, new player coach and friend Paul Hand persuaded him to become his bench coach. For the next 18 months John enjoyed the highs and then lows of team management.
At the end of a disastrous 1998 – 99 season, the Pirates had finished rock bottom of the league. John decided to walk away from the game.

These days, after many years working in the haulage industry John Kidd is semi retired, however he can still be spotted behind the wheel several days a week, most weeks.

You can also listen to Podcast interviews from John’s alumni of former Ayr Bruins, Peterborough Pirates and Paisley Pirates players:

Todays shout out goes to new Patreon Patron Jim Muir – thanks for your support Jim.

Also, thanks, as ever, to all of my Patreon Patrons:
To Tommy Boll, Oscar Brownsword, Michael Cook, Colin Dunn, Jim Murden, Jeff Povey and Chris Saddington.
Thanks for your continued support guys