Born in Fife, Les Millie started skating at just 5 years old and progressed through the Kirkaldy junior ranks.
At the age of jus 14, Les was called up to make his senior debut as a Fife Flyer for a game against the Dundee Rockets. 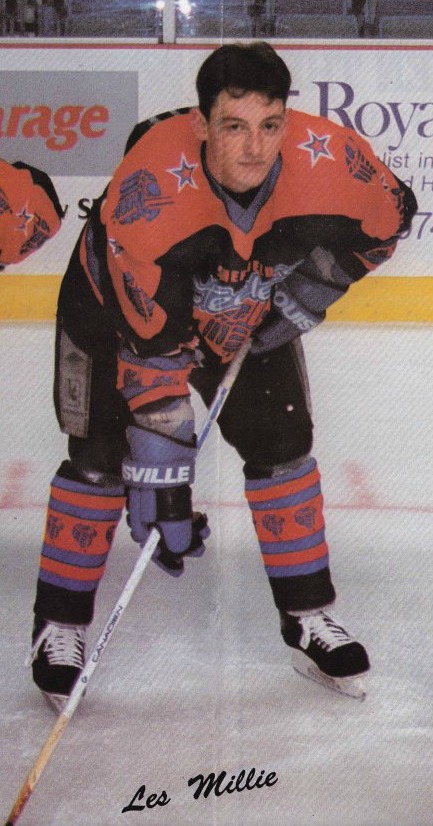 The following season Les became a regular in the Fife Flyers team, playing a total of 35 games, scoring 10 times.
Les spent 4 seasons in a Flyers team packed with, like himself, up and coming young players.
Unfortunately the Fife Flyers had an unhealthy policy of paying good wages only to their imports.
This caused many of their young British talent to look to progress their careers elsewhere.
Quality young players such as Ian Robertson, Dean Edmiston and Andy Donald all looked to further their careers elsewhere.

I asked Les how he came to move south of the border to join the Sheffield Steelers.
He recalls:

It all started the previous season when a curfew infraction lead to an indefinite suspension by coach Brian Kanewischer.
During this time myself and Neil Able were invited down to Sheffield by GM Ronnie Wood to see what it was all about.
There was no doubt that this was the place to be.

So 19 year old ‘Laser Les” Millie, with help from ex Fliers team mate, Neil Abel, quickly settled in.
That began a long association with both the team and the City of Sheffield.
He quickly became a firm favourite with the Steeler’s fans.
The early nineties were good times for Les Millie, playing on the same line as ex Flyers team mate Tim Cranston and Canadian/British dual National Tommy Plommer.

They were part of a team that achieved incredible success in a short space of time.
During the 3 seasons of Les’s career with the Steelers, the team achieved promotion (twice), a League title and a play off Championship.
A highlight of which must have been scoring 3 times (including a penalty shot) in the 1994 – 95 Heineken Wembley play off semi final to gain revenge over the Cardiff Devils for the previous season’s Playoff final drubbing.

Les also gives us an insight into his least favourite ice rinks, and on opposing teams fans.
Les also talks of his less than warm welcome on his return to Kirkaldy, as a Sheffield Steelers player. 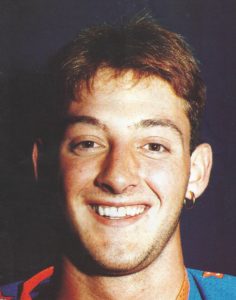 However, all good things must come to an end. After the terrific success of the previous season where he’d scored 52 times, things were changing.
It became clear early in the new 1995/96 season  that, with new signings, he had slipped down the pecking order.
Lack of ice time caused Les to re-think his position at the club.
After a conversation with coach Alex Dampier, Les decided to move on, returning to his former club, the Fife Flyers.

He also gives us an insight into his least favourite ice rinks, and on opposing teams fans.
Les also talks of his less than warm welcome on his return to Kirkaldy, as a Sheffield Steelers player.

After a telephone conversation with the Flyers player coach, Mark Morrison, he returned to Fife and rejoined the Flyers.
Les never reached the heady heights of the previous few seasons, but is was a really enjoyable year.
He played 28 times and scoring 23 goals.

In this episode I give a shout out to Scott Plews and Frankie Killen and their 100 Years of  UK Ice Hockey event.

To the Cats Whiskers TV Podcast.

Aaron Murphy and his Murph on Ice Hockey Blog.