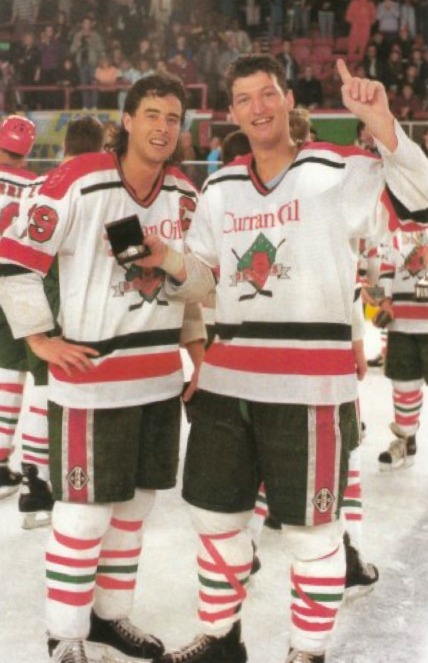 In this episode I interview former Peterborough Pirates, Cardiff Devils and Great Britain international D-Man Shannon Hope.
The big Peterborough (Ontario) born D-Man arrived in the UK in 1984 after new Peterborough Pirates coach Ron Katernuk, an old friend from his junior days, persuaded him to sign for the Pirates.

We talk of his year in Peterborough as one of only three allowed imports and of the characters of the team from Cambridgeshire that helped win them the Championship Trophy and subsequent promotion to the Heineken Premier League.

After a two year break, former Pirates team mate and good friend John Lawless lured him back from Canada to play for his Cardiff Devils team

“I thought I’d spend just a couple of seasons there but ended up staying for over 20 years”.

“We had a good team that wanted to be the best, we were used to winning, we always seemed to find ways to win games”.

We talk of the characters of the Devils team, of  “The Posee” the five locally developed young Cardiff lads, and of the crazy guys of the league, two of which went on to later play for the Devils.

We move on to discuss Shannon’s love for having fun – lots of it, including a practical joke episode with a hotel water hose that room mate Jeff Smith won’t forget in a hurry. 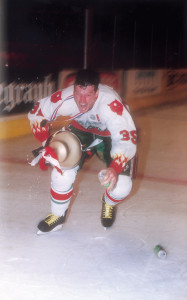 Fighting in Hockey is part of the game and Shannon was certainly no stranger to dropping his gloves when required. He tells of an incident with former Nottingham Panthers and Great Britain D Man Chris Kelland, when a fight broke out while shaking hands at the end of a game and also of a “stray” elbowing incident with a former Murrayfield opponent and later team mate and friend.
Note that Shannon’s Slovakian accent and impersonation of Ivan Matulik is hilarious!

You can listen to Podcast interviews from Shannon’s alumni of former Peterborough Pirates and Cardiff Devils players here:

I give a shout out to Stephen Elliott who left a 5 Star iTunes rating and wrote: “Great Hockey Podcast for UK fans” “Great to hear from players who have previously been playing in the British Leagues, only been a hockey fan since 2003 but still find it fascinating to hear old stories about the old rinks, traditions, rituals and events that happened”.

Last, but definitely not least, I give a big shoutout to Dave Simms and everyone who is taking part in the three day Eighty Three mile Charity walk starting on Wednesday 18th March 2015. The walk is to raise funds for the Weston Park Hospital Cancer Charity in Sheffield and has been championed by Sheffield Steeler’s fans Amy and her sister Beth Usher.

Amy is herself being treated by the hospital for a rare form of throat cancer but sadly her condition is now considered to be terminal.  She was and continues to be an enthusiastic fund raiser for the hospital.

Can you spare a few Pounds, Euro’s or Dollars? Would you like to help make a difference to someone’s life by making a donation? If the answer is yes please click the Just Giving link which will take you to the official donation page:
Just Giving
Their target of £10,000 currently stands at 71% – it would be such a fantastic achievement if we could help them reach their target.
All monies raised will go directly to the Weston Park Hospital Cancer Charity.
Our thoughts and very best wishes go out to the amazing person that Amy is.
Just Giving