On today’s show I interview former Whitley Warriors forward and head coach Simon Leach.
Simon began his hockey journey as a 6 year old when he and his best friend, went to the local Whitley Bay ice rink to watch another friend’s dad play for the Warriors in a practice game.
That best friend, by the way, was David Longstaff, who has also enjoyed a long and outstanding hockey career and  gone on to be one of the all time home grown greats of UK Ice hockey. 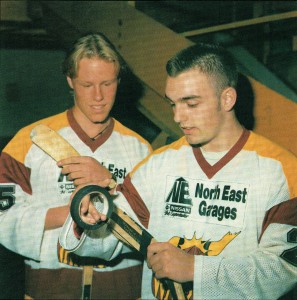 The two boys spent most of their life at the Hillheads Road rink, progressing through the Warriors junior system. They made first team debuts together, as 15 years old’s. It was an away weekend as the Warriors took on the Peterborough Pirates and the Solihull Barons.
Both players were also very proud to represent their Country.
They represented Great Britain at all levels including U16, U19’s, U21 and eventually the Senior team.

During the late 1980’s / early 1990’s the Warriors were a tough, uncompromising outfit. They had a reputation for “not taking any prisoners”. However rough and tough they were, the team still boasted many talented home grown players and some quality imports.
We talk of the Warriors team of those times, of the quality of British talent, of the team’s tough style of play, their ‘never say die attitude’ plus the class of imports playing for the team.
Players such as Hilton Ruggles, Luc Chabot, Mike Rowe and a certain Mike Babcock, the current Toronto Maple Leafs head coach, all became cult Whitley Warrior heroes.

We talk about the characters of the team and Simon tells of the “Tough Guy” in the locker room.

When he spoke, people listened, and you didn’t mess with him.

At that time the North East was a hot bed of hockey with 4 teams striving to be the region’s best. Each season the Billingham (later Cleveland) Bombers,  Durham Wasps, Crowtree (later Sunderland) Chiefs and the Whitley Warriors competed for the North East’s very own competition, the Castle Eden Cup. Durham would usually be top dog.
The Wasps were and exceptional team and were the dominant force, however the one “Local Derby” everyone wanted to see was the Wasps v the Warriors. It never disappointed, as Simon explains,

Every Durham v Whitley game was a war.

We go on to talk about the Whitley Warriors home ice, the Hillheads Ice Rink.
The rink is situated in Whitley Bay a small seaside town located approximately 8 miles from Newcastle.
At that time the Hillheads rink was infamous for bad ice, soft boards and poor lighting.
I’m sure Simon was smiling when he said;

It was never comfortable for the visiting team. 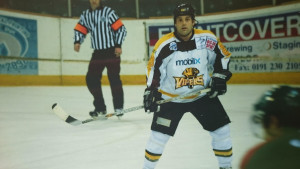 In 1995 Simon chose to leave the Warriors, however this proved to be short lived. After just 10 games, Telford’s financial situation forced him to return to the North East where he rejoined the Warriors, now the renamed Newcastle Warriors, after the team had just completed a move from Whitley to the brand new Newcastle Arena.
However, after just one season the Newcastle Warriors travelled the 8 miles back to Whitley Bay where they once more became the Whitley Warriors, much to the delight of the  local fans.

After experiencing life away from Whitley, Simon decided to move on and spent the next couple of seasons over the border in Scotland playing for the Paisley Pirates where he enjoyed great success with a very good team.

During the next few seasons Simon played for a number of teams, including Whitley (again), the Kingston Hawks and a few more games up in Paisley before, as he confesses:

A year later former Nottingham Panthers and Sheffield Steelers head coach, Alex Dampier persuaded him to come out of his self imposed exile and join the newly created Newcastle Vipers. Initially the team competed in the British National League (BNL). 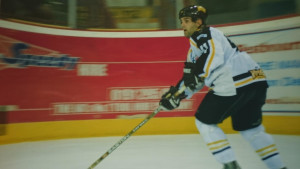 It was a good decision for him as  3 years later the Vipers joined the Elite League.
In 2006 the team ended the season by making the final 4 in the Elite League Championship playoffs. As total underdogs they defeated first the Belfast Giants in the semi final and then the much fancied Sheffield Steelers to become the Elite League Playoff Champions.

He then had a brief spell in Australia where he played for the Adelaide Avalanche. Simon then returned to the Whitley Warriors and had two successful spells as Head Coach.
It was only very recently that he decided to relinquish that position to spend more time with his family.
Simon is very proud to be currently involved as an assistant coach with the Great Britain U18 set up.

You can also listen to Podcast interviews from Scott’s alumni of former Whitley Warriors, Paisley Pirates and Kingston Hawks  players: