My very first question to Craig was how he’d acquired the nickname  “Cougar”, as during my research, several guys I’d spoken to had referred to him by that name.

Craig went on to talk about his early days in his home city of Ottawa, his memories as a five year old walking out of his back yard straight onto the outdoor rink to play hockey,

We did that for years and years, from November to April, it was a real blast

As a seventeen year old playing for the Sudbury Wolves in the tough OHL, Craig played 52 games for them but then chose to drop down a league to “Junior A” for the next 3 seasons.

In 1984, on the suggestion of his grandfather Alfred Taylor, Craig decided to try his luck playing Hockey in the UK.
His grandfather, who had emigrated from the UK to Canada many years before, spoke to the Streatham Redskins team manager Alex Goldstone and Craig crossed the Atlantic to become one of the team’s three imports. 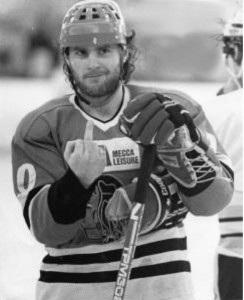 Craig joined a very successful Redskins team, with great players such as Gary Stefan, Trevor Coogan, Jeff Smith and the late Gary “Moose” Cloonan and he fondly remembers his time there – even though he couldn’t really understand most of their accents, especially Alex Goldstone’s cockney!
It didn’t take Craig long to discover that his firey coast to coast style of play and temperamental performances would get him into more than a little trouble, in fact he was thrown out of his very first game, away at fierce rivals the Nottingham Panthers.
Craig recalls,

The refereeing took me a while, but by the end of my last year I finally figured it out.

Craig spent four seasons in the UK, three seasons playing for the Redskins and the fourth, after  a brief spell with the Slough Jets, with the Nottingham Panthers for the 1987 – 88 season.
At 5 foot 8 inches Craig wasn’t the tallest of players. He was a stocky, feisty player, sometimes described as a nut case, with great stick handling and power skating skills to mesmerise the opposition. He also had the knack of getting under the skin of opposing players and their fans, for example Nottingham fans hated him in his three seasons playing for Streatham but absolutely adored him as soon as he pulled on a Panther’s jersey. The downside was that his firey temper often led him to the penalty box.

Craig returned to Canada at the end of the 1987 – 88, as he explains, to get a hair cut and a real job. He has three sons and works as a telecoms Manager for Bell Telecom.

Thanks for the memories, Craig. 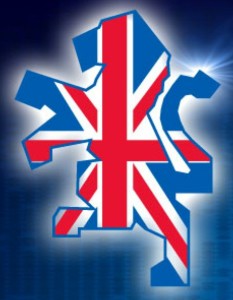 A big shout out and congratulations goes to the Great Britain men’s Ice Hockey team who returned from the World Championships with a silver medal after coming second, behind Korea in Pool 1b. They were a whisker away from topping the table and although many were very disappointed on losing out on promotion, the foundations have been set for next season – well done guys.
I also give a shout out to Rob McGregor who tweeted:

“I really miss the Heineken era with promotion, relegation and limited import numbers”

You can also listen to Podcast interviews from Craig’s alumni of former Nottingham Panthers and Slough Jets players.