In today’s show I talk to Frankie Killen and Scott Plews, organisers of the 100 Years UK Ice Hockey event. 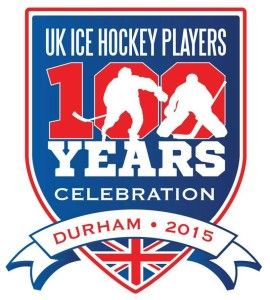 Both guys had been interviewed for the podcast previously.
Frankie in Episode 12 and Scott in Episode 15.
Both had talked of their hopes and aspirations for the event. Their hard work and attention to detail paid off handsomely as the event turned out to be a massive success.

Held at the Ramside Hotel in Durham on the 31st July and 1st August 2015 as a celebration of ice hockey over the last 100 years, the event was an occasion that everyone had been waiting for, for a very long time.
For some, it was a chance to play a few rounds of golf with old friends and have a few beers, and for all to have even more beers at the gala dinner and renew old friendships with both former team mates and adversaries alike. 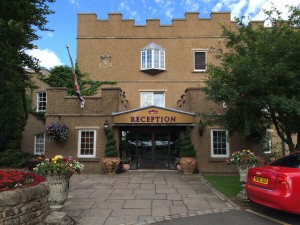 They were there to talk about the game as it was in their era, to celebrate the achievements of their peers, swap stories, tell jokes and generally do what all hockey players do, have “one or two” drinks, take the micky out of each other and have a really great time.
Players, referees and officials came from all parts of the UK, some guys even chose to fly in from afar, such as Andy Allan, Terry Gudziunas, Andy Sparks, Brian Kanewischer (Canada), Rob Breskal (Australia) and Ake Alm (Germany). It was an event not to be missed. 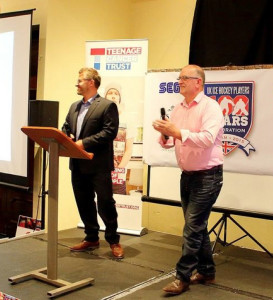 The Gala Dinner award ceremony honoured hockey legends such as Tony Hand as the player of the century, 1936 GB coach Percy Nicklin as coach of the Century and Peter ‘Jonker’ Johnson for his outstanding contribution to Senior and Junior ice hockey.
We were treated to a video message from the Toronto Maple Leafs head coach Mike Babcock sending his best wishes. Mike, a tough and uncompromising D Man, played a season for the Whitley Warriors back in the 1987 – 88 season.
Former Ayr and Peterborough coach Rocky Saganiuk also made a recorded video message, as did former Great Britain, Nottingham and Sheffield coach Alex Dampier. 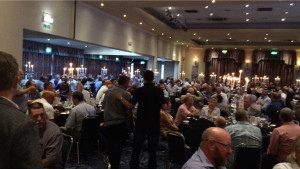 The event itself raised over £10,000 for the two nominated charities, Teenage Cancer Trust and Macmillan Cancer Support.

A special mention must go to Jeff Smith, whose presentation on his Big Moose charity had the whole room in silence and more than one attendee fighting to hold back the tears.
Awards were also given to Tony Hand, Peter “Jonker” Johnson and Mike Babcock 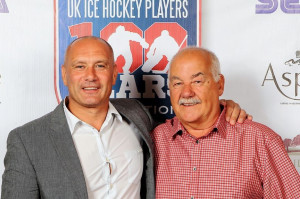 Another mention must also be given to John Churchill and Martin Guy who cycled 180 miles from East Kilbride in Scotland to the Ramside Hotel in Durham and raised over £2000 for the two nominated charities, a mention must also go to Kelvin Land for making his holiday home in Florida available for Big Moose to make use of.

I conclude the interview by asking the guys the question everyone wants to know,

Are you up for another one, will there be another UK Ice Hockey event and if so when?

if you want to know the answer, you’ll have to listen to the Podcast.

I give shout outs to The Nottingham Legend Sports Bar, “Flameboy77 ” and “Smashy41” for their 5 Star iTunes ratings.
Thanks guys.

I conclude the show by revealing who my guest is for the next Podcast, when, in episode 27, I interview a former NHL and Great Britain forward who played over 370 games for teams here in the UK.