Barry Nieckar, former London Knights and Nottingham Panthers Enforcer is my guest on todays show.
He spent the majority of his hockey career playing in North America, in the AHL, IHL and ECHL. Barry also had 8 games in the NHL, icing for the Hartford Whalers, Calgary Flames and the Anaheim Mighty Ducks. 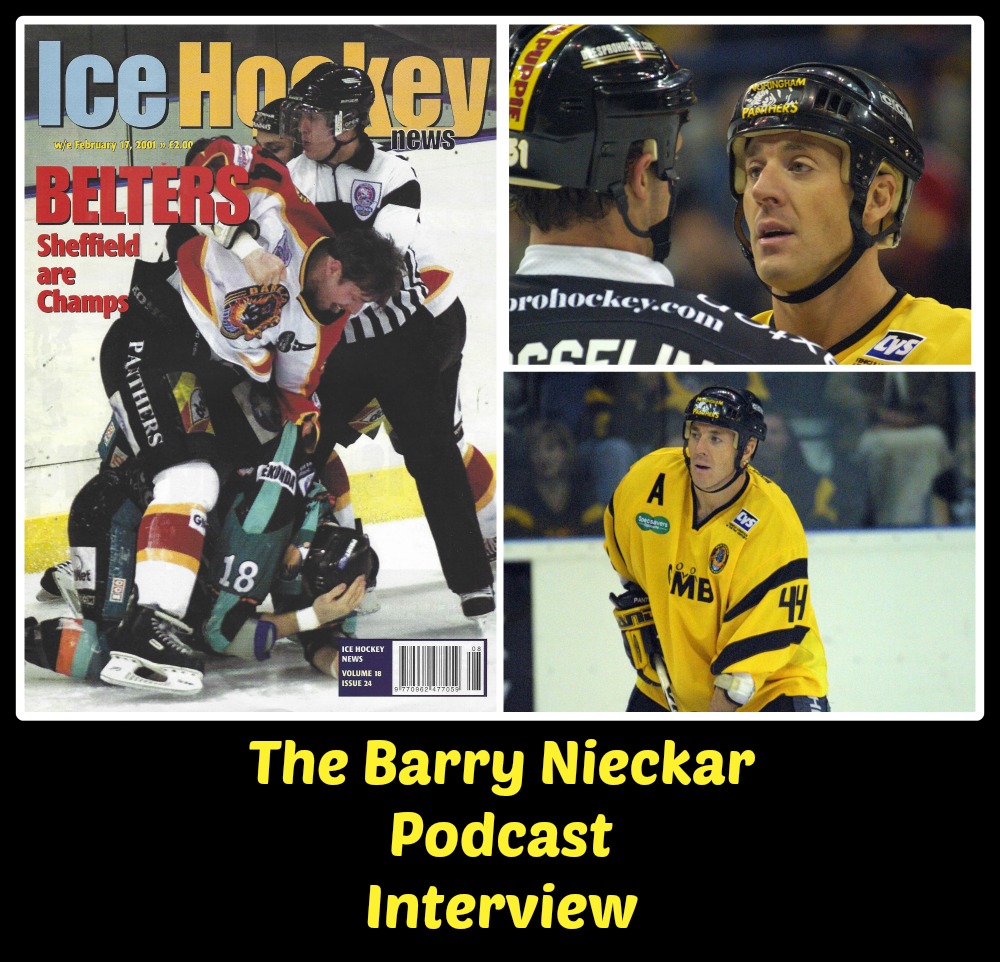 Barry, with wife Candace, have made their home in Edmonton in Alberta, Canada. Our interview was recorded early in December, at that time they were enjoying temperatures of minus 25c.

We talk about his hockey career and of how his role evolved into that of an enforcer, he recalls;

I didn’t fight a lot in Junior, it started
at my first NHL training camp and then going to the East Coast League
were I started getting into a fighting role.

I ask  Barry which was the toughest league to play in?
His answer;

The NHL, they have the best of the best, the most skilled players and the toughest.
Odds are that your opponent is just as tough
or even tougher than you are. 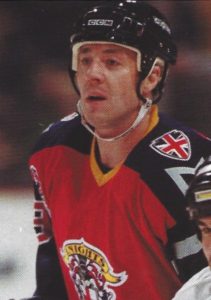 We talk of one particular event, a brutal, fast and furious fight with St Louis tough guy Tony Twist. Barry openly admits that Tony was probably one of the toughest guys he ever fought.
Check it out on Youtube here.
We go on to talk about the after effects of his enforcer role since retiring. Fortunately, 17 years after retiring from Pro Hockey, Barry continues to enjoy good health.

Even though Barry signed his contract in August 1999, it wasn’t until late December that he arrived in London.
Head coach Chris McSorley left him kicking his heels at home, bringing in other players but not Barry. This left him in limbo, he wasn’t earning a wage and couldn’t sign for any other club.
Eventually the case was taken to arbitration, Barry won and packed his bags, ready to set off for London.
However coach McSorley gave him just 2 days notice, insisting on him being in London by Christmas Day. Bloody mindedness by the coach perhaps?
Fortunately Barry and wife Candace pulled out all the stops and he made his SuperLeague debut the very next day. 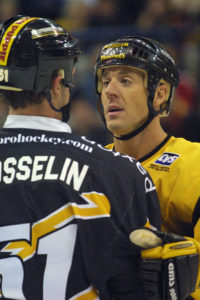 It was a successful season for the London Knights. Prior to Barry’s arrival the team had narrowly missed out on winning the Benson and Hedges Cup, by one penalty shot.
After taking a 2 – 0 lead against the Manchester Storm, the game had finished 3 – 3 after overtime.
Forward Rick Brebant scored the only penalty shot, which was enough to give the Manchester Storm victory. Ironically, just a week after the final, Brebant left Manchester and signed for the London Knights.
The Knights finished the season in 4th place and so made the SuperLeague Playoffs.

London had made sure of their playoff weekend place by topping their quarter final group. In the semi final they faced the Ayr Scottish Eagles, the game ended 1 – 1 in regulation time. However an assist from Barry helped Mark Butje to score a second minute overtime winner.
In the final the Knights faced the Newcastle Riverkings, winning the game 7 – 3. It was the clubs first major trophy, it was Barry’s first UK winners medal too.

In the summer of 2000 Barry swapped London for the East Midlands when he signed for Nottingham Panthers. Coach Alex Dampier had wanted to sign him during the previous season but Barry’s London Knights contract had prevented it.

That September the Panthers had moved into the brand new £43 million National Ice Centre, the fans expected great things.
Although the team had former NHL Stanley Cup winners Jamie Leach and Jim Paek plus NHLers Bob Nordmark and David Struch the Panthers could only finish in 8th place. They also failed to make the Playoff finals weekend.
By Nottingham Panthers high standards it was a very poor season. 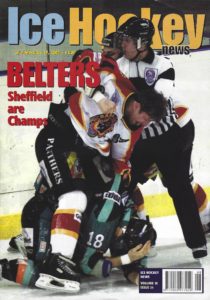 Unfortunately, that season was memorable for all the wrong reasons.
It was February 9th 2001 and as with most Panthers v Steelers encounters in those days, passions were running high. Unsurprisingly a few players had some things to settle from incidents that had happened from past meeting that season.

It was in the second period that the game boiled over, 24 minutes and 31 seconds of the game to be precise. Barry left the bench to protect team mate Greg Hadden from Sheffield enforcer Dennis Vial’s cross checking from behind onslaught. This was quickly followed by Scott Allison leaving the Steeler’s bench to protect his teammate, Dennis Vial.
In the heat of the moment Scott gave Barry a vicious check to the back of the neck, the force knocking his helmet off. Seconds later the benches cleared and fights broke out all over the place!
The “battle” lasted for over 11 minutes and made hockey news all over the world.
Eight Steelers players, four from the Panthers and both coaches were thrown out of the game.
In total, the teams racked up a SuperLeague record of 471 penalty points.
Check it out for yourself, it’s available on Youtube here: Youtube here.

In all, Barry spent 3 seasons in Nottingham. In his third season, Barry’s former Steeler’s adversary, Scott Allison, became his teammate!
I asked Barry how he felt about that, he recalled;

At first I didn’t know what to make of it,
but, we shook hands
and became teammates.
He’s a class act and a really nice guy.

At the end of that season Barry retired and returned to Canada, he now works in the oil and gas industry.

Thanks for the memories Barry.

You can also listen to Podcast interviews from Barry’s Nottingham Panthers alumni: