Canadian born Chris Norton is today’s Old Time Hockey UK hockey hero from the past.
Chris, an NHL draft pick for the Winnipeg Jets, spent most of his career assigned to AHL and IHL teams.
The 1991 – 92 season saw Chris icing for the Phoenix Roadrunners of the IHL. There a team-mate by the name of Brent Sapergia suggested he consider playing hockey in the UK. Brent had contacts there, Chris’s mom was originally from Manchester so he shouldn’t have any problems playing UK Hockey.
Chris then had a conversation with David Simms who arranged an import slot with the Ayr Raiders.
Chris’s 6 year UK ice hockey adventure was about to begin. 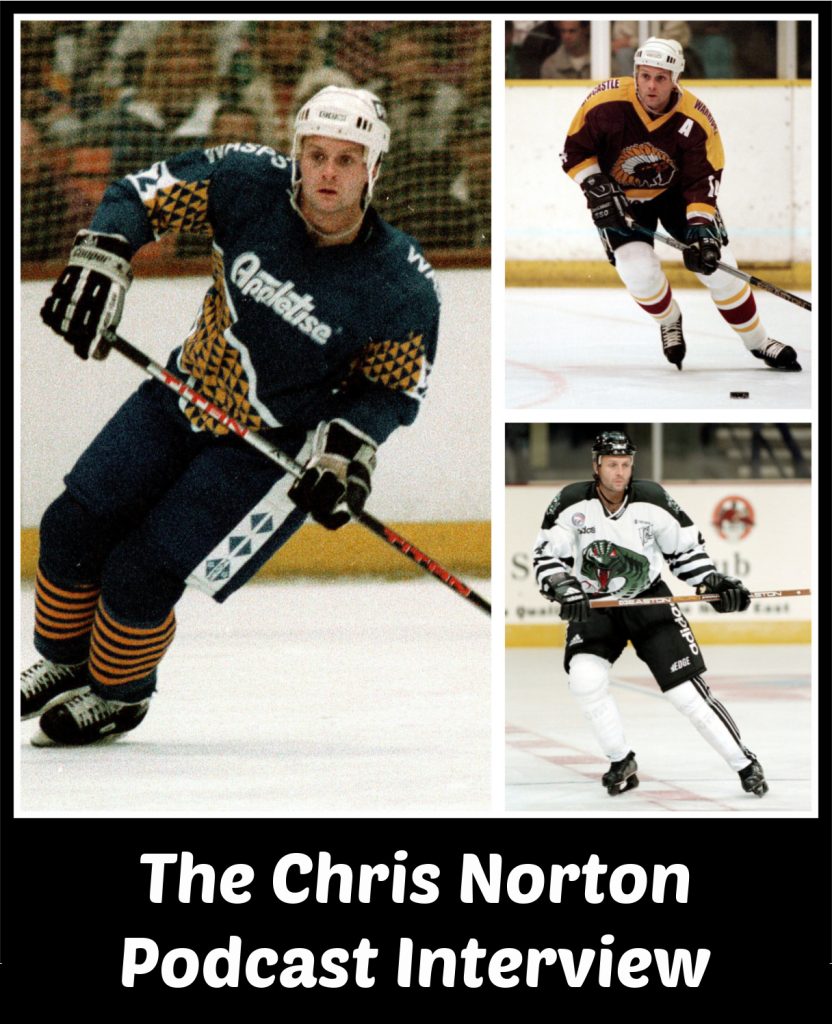 The Raiders had already signed two great imports in Len Hatchbourn and Kevin Lavalee.
A third import, Alan Hepple, had let the team down and so Chris was a last minute replacement.
The team’s brand new ice rink, the 3000 seater Ayr Centrum was yet to be completed. The team had arranged to play out of Paisley, with a capacity of just 850.
Consequently money was very tight and despite having a good team, debts soon accumulated.
On 4th November 1992 the Ayr Raiders folded, Chris was out of a job.

At the same time, Billingham’s import d-man, Andre Malo, was out with an injured back, the Bombers were looking for cover. Chris took the job and so he was back in work, if only for a short time.
Although the gig was short, just 5 games, Chris was able to make plans and discover new contacts. He had travelled to the UK on a one way ticket, a return to Canada wasn’t an option. 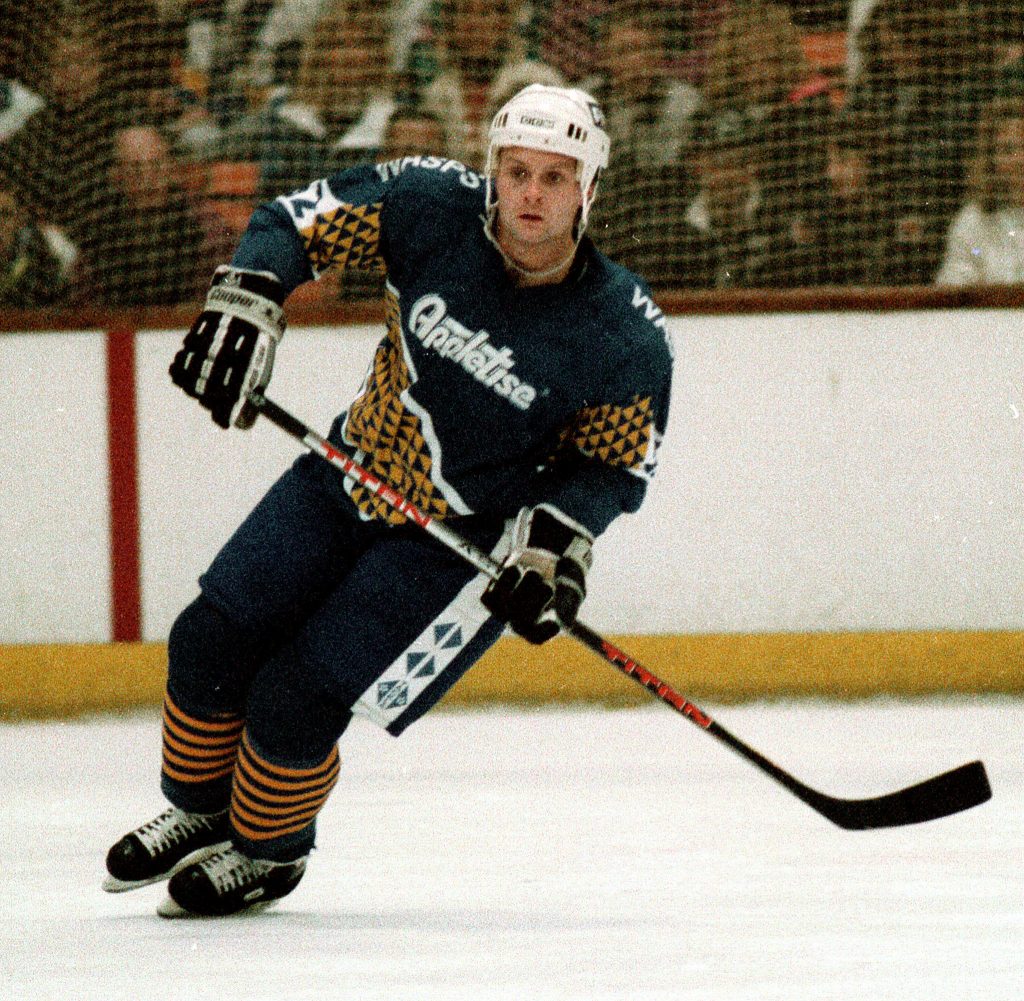 Just down the road in Durham, the once mighty Durham Wasps were having a terrible season. The team had previously dominated the Heineken league, they’d been league champions for the past two seasons but were now struggling. They had just released forward Tim Cranston and were looking for a new import. They needed to strengthen their defence and Chris fitted the bill perfectly.
It was certainly a big learning curve for Chris, he recalls one of his first games;

We were away at Whitley Warriors, it was a fierce local derby.
Early in the game I made a pass and Johnny Iredale hit me, it sent me over the boards,
there was no plexi or netting.
I landed at the feet of a little old lady wearing her Warriors colours
– she kicked me in the head!
That was my welcome to Whitley.

The Wasp’s poor form continued and despite Chris’s best efforts the team finished the season at the bottom of the league. Unthinkable as it may have been, a Durham Wasps relegation from the Premier league was now virtually assured. 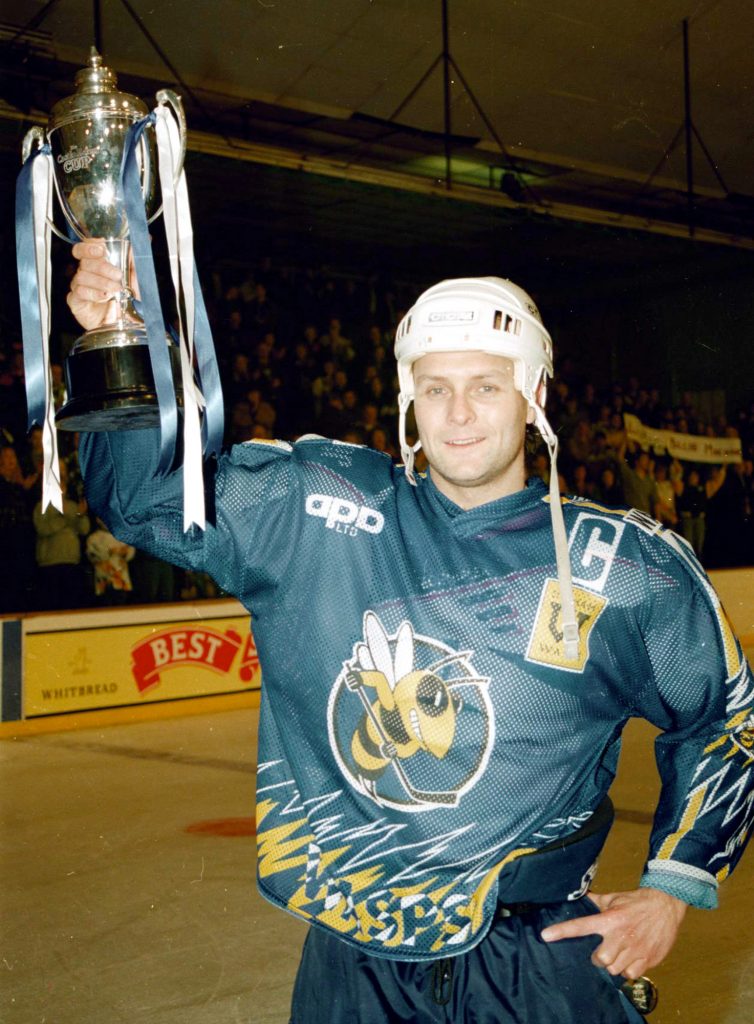 However a convenient “reorganisation” saved the day as the League decided to expand the Premier division. This “minor miracle” allowed Durham to retain their Premiership place.
Wasps owner Tom Smith had always been renowned for knowing what strings to pull and when.

Chris returned to Durham the following season and had the honour of being made team captain. It was a better season, finishing 6th in the league and making the playoffs.
Chris also lifted the Castle Eden Cup, trouncing an injury stricken Whitley Warriors 17 – 2 in the final.

The Wasps hired new coach Rocky Saganiuk for the 1994 – 95 season, he decided Chris was not needed for his team.
Despite a few offers elsewhere Chris and wife Christina decided that they’d like to stay in the North East. An offer came in from the Teeside Bombers (formerly Billingham Bombers) and Chris accepted.
He teamed up with imports Richard Laplante and Al Latrelle along with reclassified Canadians André Malo and Todd Bidner.
Sadly the Bombers season ended early when financial problems forced the team to fold on 25th November 1994.
Once more Chris was out of a job.

At the very same time the Durham Wasps were also going through an upheaval. The club had a new owner in Rex Brown after crippling debts forced the Smith family business to go under.
Coach Rocky Saganiuk had been sacked and his chosen imports had also departed. Rex Brown approached Chris for help and he gladly returned to the Wasps.
Surprisingly, after all that turmoil, the Wasps finished a solid 5th in the league and made the Playoffs. 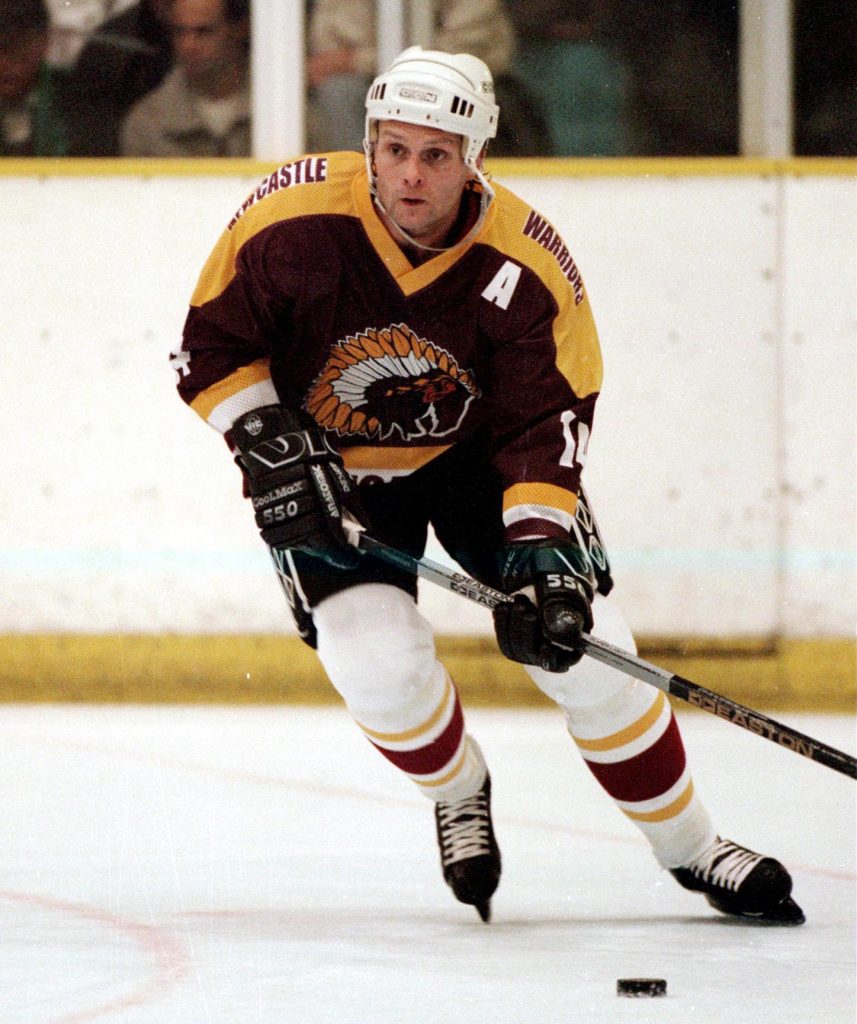 Another season, another club. Sir John Hall had bought the Durham Wasps and Chris was again surplus to requirements.
The Whitley Warriors, now renamed the Newcastle Warriors, had agreed to play out of the brand new 7000 seater Newcastle Arena. Chris became one of nine new Warrior signings for coach Terry Matthews.
If the fans were hoping for a new dawn and better times, they were soon to be disappointed.
Due to the arena’s ongoing construction work, the team had to begin the season at Hillheads. Their first home game at the Newcastle Arena wasn’t until 19th of November.
It was a poor season, Gary Douville had replaced coach Matthews mid season, results were very inconsistent, attendances were poor too.
The team did make the final playoff spot but failed to make the Wembley finals.

The 1996 – 97 season saw Sir John Hall’s Newcastle Cobras (formerly Durham Wasps) become the Arena’s new tenants. A contract dispute with the Arena’s owners had forced the Newcastle Warriors return to Whitley Bay after just one season.
For Chris it was a case of same arena, new team. He signed a 2 year contract with the Cobras as player – assistant coach. Former Wasps team mate Rick Brebant was now the team’s head coach. 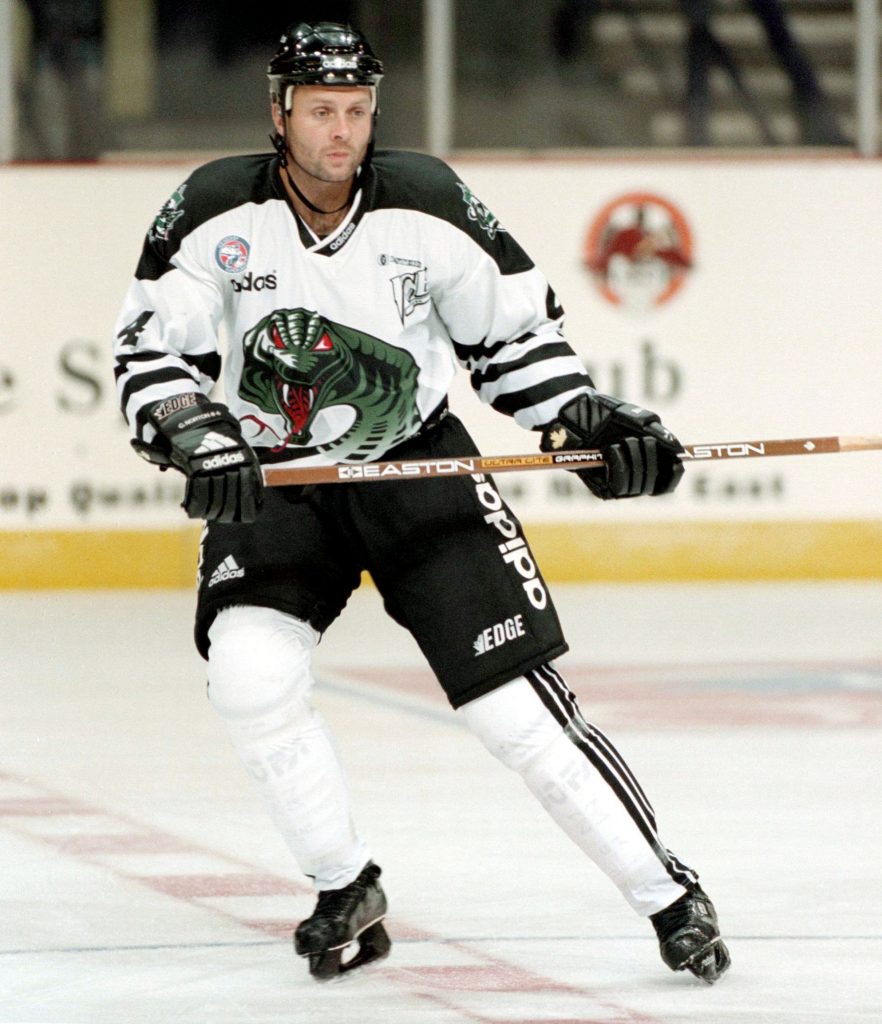 That season saw the start of the brand new unlimited import British Superleague, the Cobras finished a disappointing 5th from 8. They also made the playoffs and the quarter finals of the B&H Cup.

Chris’s second Cobras season is probably best forgotten. By the beginning of November player power had forced Rick Brabant out of the club. He was replaced with Dale Lambert.
The team finished bottom of the league.
At the end of the season Chris and wife Christina left the UK to start a new life in Switzerland.

Thanks for the memories Chris.

You can also listen to Podcast interviews from Chris’s alumni of former Ayr, Durham and Newcastle players here: 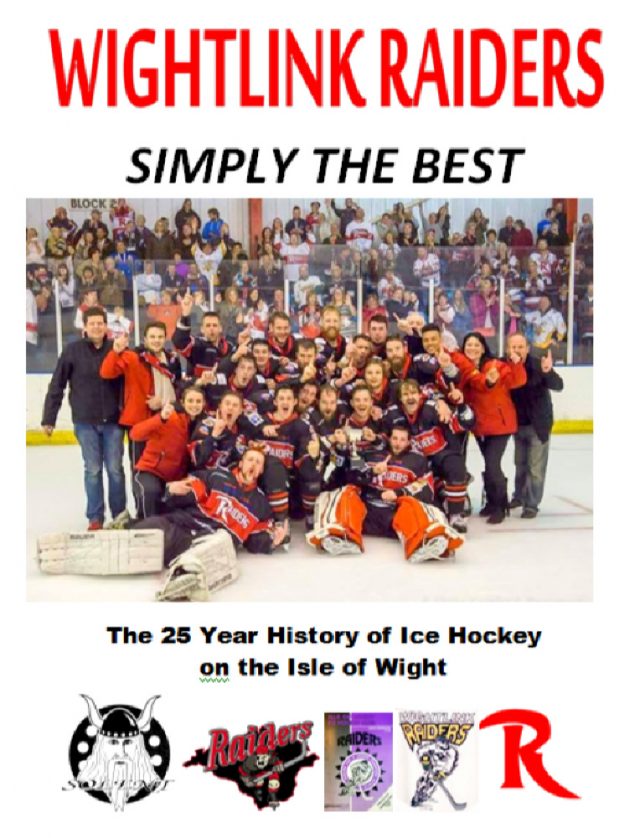 There’s a brand new ice hockey book, written by Chris Randall and due to be published very soon.