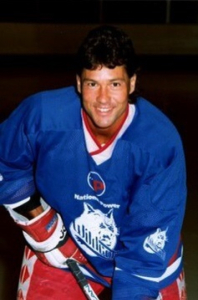 You could say that Daryl Lipsey came to the UK by accident!
Originally from North Battleford, a small town in Saskatchewan Canada. Daryl had agreed to fly to Europe to sign for EV Stuttgart in the German division 2 Bundesliga.
However, just a week before travelling, the move fell through. His agent then offered him a slot on a UK team, his first words when offered the UK move was; 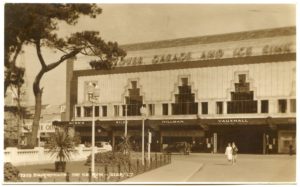 So, in late summer of 1984, a 20 year old Daryl signed for the Bournemouth Stags. The Stags played in Division one of the British Heineken League. He was classed as an import forward, joining his fellow imports, Canadians  Kevin McNally and player – coach Paul Kite.
So Daryl arrived  at the Bournemouth Arena, known locally as the Westover Ice Rink and situated above a car dealership.
On seeing the rink for the first time, he was in for a  big surprise, he recalls; 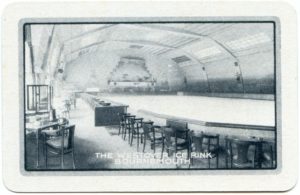 The Stags finished the 1984 – 85 league season season in a disappointing 7th  position (out of 11). However Daryl proved indispensable, scoring 57 gaols and 24 assists for 81 points in 20 games.
Daryl’s second Bournemouth season was pretty similar to his first. Despite new imports in Don Yewchin and Ian Ramsey the team again finished 7th (out of 12). Daryl did improve his points total, scoring 59 goals and 60 assists for 119 points in 19 games.

Click here to listen to my Podcast interview with Daryl Lipsey right now.

After two seasons in Bournemouth it was time for a new challenge. Daryl decided to move to Swindon and the newly built Linx Centre. He signed for the newly formed Swindon Wildcats hockey team.
Fast forward 9 years and Daryl had become a part of community life in Swindon, playing and coaching for the Wildcats organisation and married to a local girl, he’d fully settled into life in the Wiltshire town when, by a twist of fate, his career took a sharp upward turn. 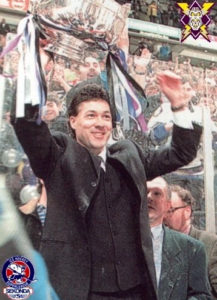 While attending a charity golf tournament in Cardiff in the summer of 1995 Daryl met up with the Cardiff Devils Supremo, John Lawless.
John had just been appointed as General Manager of the new Manchester Storm hockey team.
As it happened John was looking for a player/assistant coach and Daryl was offered the job.

The team were obliged to start off in the lower British League Division One. They were to compete against teams such as the Blackburn Hawks, Dumfries Vikings (now Solway Sharks) and Telford Tigers before earning promotion to the top flight with 99 points from 52 games.
During that season an incredible 16,280 Nynex crowd watched the Storm beat local rivals, the Blackburn Hawks, 11-3.

League attendance records followed with an astonishing 17,245 record crowd turned out to see the Storm crush arch rivals, the Sheffield Steelers, 6 – 3.
Two seasons later the team won the SuperLeague title and the following season won the Benson and Hedges Cup.
Daryl became the Storm’s Head Coach for season 2001-02 and although having a disappointing season, managed to guide them to the end of season Playoff Finals before losing out to rivals the Sheffield Steelers on penalty shots.

In the autumn of 2002, the Storm’s agreed shirt sponsor pulled out at the last minute.  The teams revenue stream had slowed right down to a trickle.
In late October 2002, after just 6 SuperLeague games, with insufficient revenue, the team had no option but to fold.

Will the last man out….

Will the last man out please turn off the lights”

could have been especially written for Daryl.

Click here to listen to the full Podcast interview with Daryl right now.