Dave Whistle spent a total of 16 seasons playing and coaching in the UK. This included 7 seasons as a player and 9 seasons as head coach. Success followed as Dave lead both the Bracknell Bees and the Belfast Giants to SuperLeague League Championships. He also coached the Giants to a Playoff winning success too. 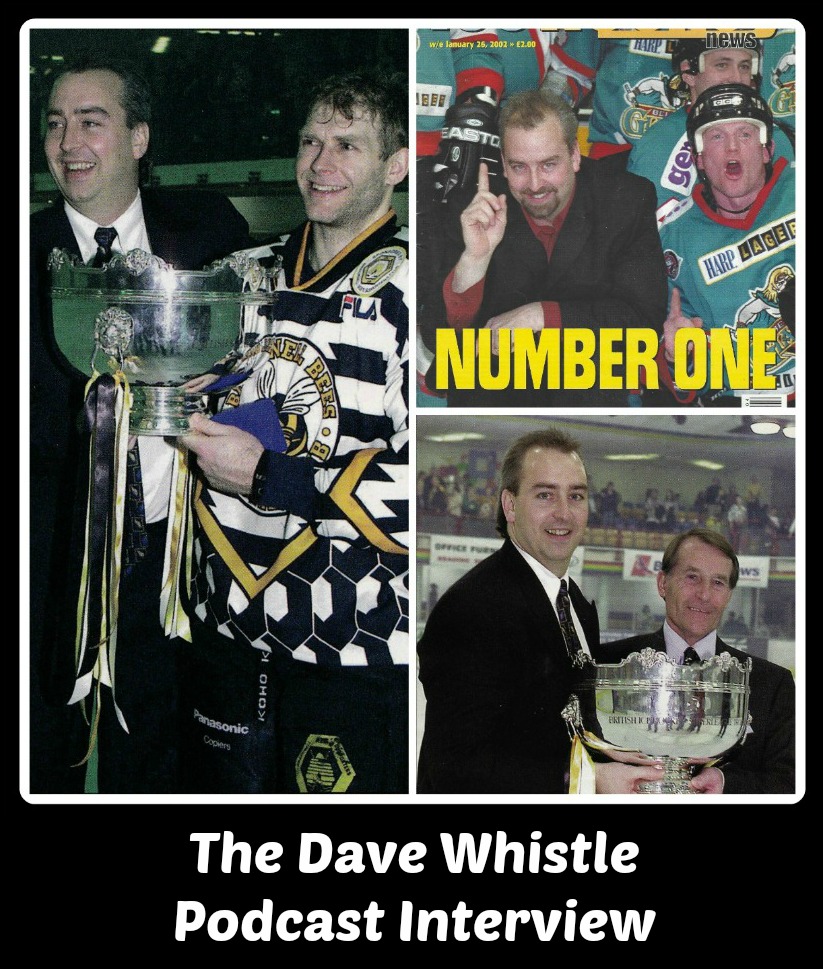 Dave is a graduate of the University of Brandon in Manitoba, Canada, enjoying 4 years of study and playing hockey.
As a hockey forward he scored goals, in fact he currently lies third in their all time goal scoring charts.
After leaving Brandon in the summer of 1991, Dave was offered a chance to play in Europe. He grabbed the opportunity, packed his skates, travelled to the UK and joined his new team, the Billingham Bombers.

Billingham was a Premier Division team in the North East of the UK but living in the shadow of their local rivals, the Durham Wasps. Relegation had only just been avoided the previous season and the Bombers were looking to do better this time around.
Dave joined other imports Andre Malo and Glen Ramsey with Scott Morrison joining the team later that year.
After a hard fought season the team finished 8th out of 10 and avoided relegation.
Dave ended the season as the team’s top scorer with 48 goals and 62 assists from 36 games.
Surprisingly Billingham didn’t offer him a contract for the following season. So, Dave decided to move south and signed for Division 1 team Romford Raiders.

Division 1, Premier Division and back to Division 1

During the next 3 seasons Dave saw ice time with teams in both the 1st division and Premier division.
In Romford Dave linked up with fellow Canadian imports Gord Jeffrey and Rob Stewart. The following season saw Dave return to the Premier Division with the Basingstoke Beavers. It was then back to Division 1, with Rob Stewart, for a successful season with the Telford Tigers. 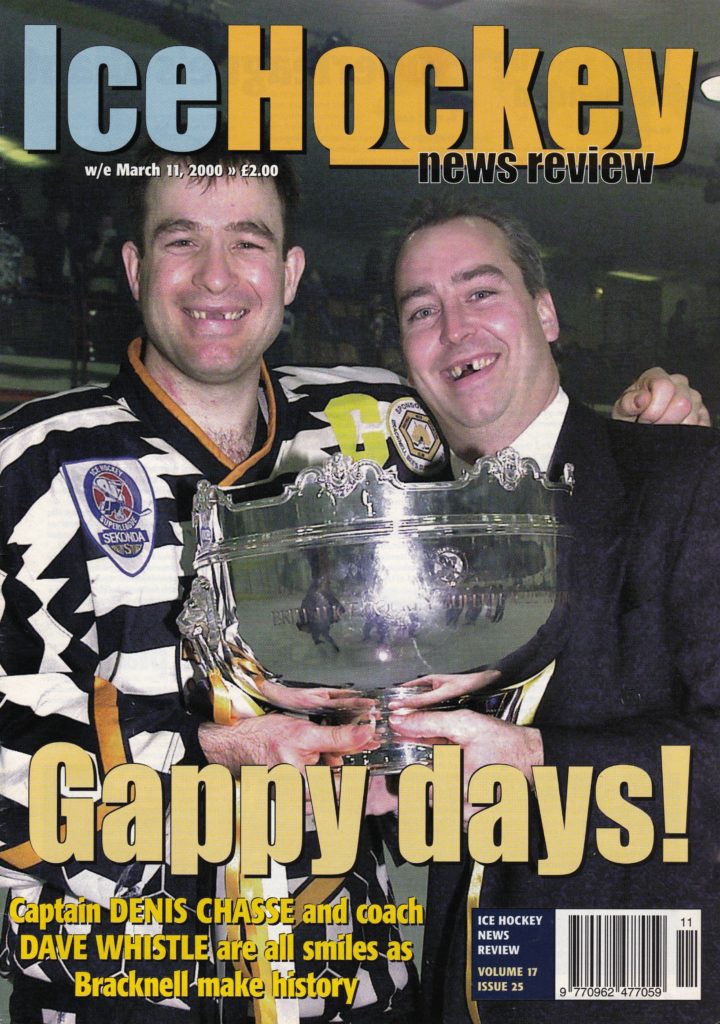 Another season, another team, this time the Bracknell Bees came calling. Little did Dave know at the time but it was to be a turning point in his career.
The Bees had been relegated from the Premier the previous season and were looking for a swift return.
New coach Jim Fuyarchuk set out to build a team to do just that. Once again, Dave linked up with good friend, d-man Rob Stewart.
Unfortunately the team never quite lived up to expectations and missed out on promotion. They could only manage 3rd place in the league, 25 points behind champions, the Manchester Storm. After the Bees failed to top their Playoff group, it appeared that their chance of promotion had disappeared.

It was a time of big changes for British ice hockey. John Nike, owner of the Bracknell Bees, was determined that his team would be a part of that change.
The new Ice Hockey SuperLeague was created on 1st November 1995, it was to replace the BHL’s Premier Division.
The Bracknell Bees became SuperLeague founder members together with the Ayr Scottish Eagles, Basingstoke Bison, Cardiff Devils, Manchester Storm, Newcastle Cobras, Nottingham Panthers and Sheffield Steelers.
Two seasons later, Bees coach Jim Fuyarchuk decided to accept an offer to become the London Knights’ head coach.
Dave had already become an assistant player – coach to help Jim with the team, so when the offer came through….
Dave explains;

I’d planned to go into coaching
and so when the offer came along I knew I had to consider it.
It took me just two minutes before I said
I’ll take it!

So Dave became the new head coach of the Bracknell Bees for the 1998 – 99 season and began to build his team.
A season later his Bracknell Bees team were celebrating winning the SuperLeague League Championship. They had finished top with the much wealthier teams like London, Manchester, Nottingham and Sheffield trailing after them.
However, after 5 seasons with the Bracknell Bees, Dave was to move on again – even though it was the last thing on his mind.

That Summer Dave was approached by Belfast Giants director Bob Zeller to become the team’s very first head coach. The Giants were a brand new franchise with no team and no supporters.
Worse still, they had no home ice until early December, their first 15 games were all on the road.
To everyone’s amazement he accepted the job.

At that time the game was changing, larger arenas were being built,
I toured Belfast, it’s a beautiful city
and I accepted the offer

Dave recruited his new team well. With a lot of hard work marketing the team and a “little luck of the Irish”, the fans arrived.
In fact they arrived in their thousands, their first game on 2nd December 2000 was a 7300 sell out.
The Giants had arrived. 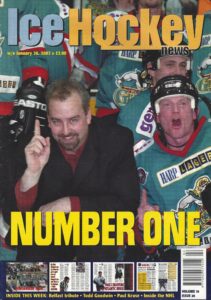 The following season the Belfast Giants stormed to the SuperLeague League Championship.
A 16 game unbeaten run, ending with a 3 – 2 victory at Dave’s former club, the Bracknell Bees, secured their first League Championship.
The team were also runners up to the Ayr Scottish Eagles in the Challenge Cup.

The following season, while not quite hitting the previous highs, proved another successful campaign.
The Giants finished as SuperLeague runners up, just one point behind the Sheffield Steelers.
However, success was to follow in the very last SuperLeague Playoff finals, in Nottingham on 6th April 2003.
After deposing of the Sheffield Steelers in the semi finals , Belfast faced the London Knights in the final.
In a thrilling, hard fought game, the Giants defeated the Knights 5 – 3 to take the Championship.

At the end of the 2002 – 2003 season the SuperLeague had folded and the Belfast Giants future looked very uncertain.
With the blessing of the Giants, Dave reluctantly accepted an offer to join the Iserlohn Roosters in the DEL. It didn’t work out and he returned to join Bob Philips’s Cardiff Devils in the newly formed Elite League.

Dave in the Elite League

Dave spent 3 seasons in Cardiff and then a season with the Sheffield Steelers before returning home to Canada in the summer of 2006. He returned briefly to coach the Cardiff Devils in February 2015 and signed a 3 year contract.
Unfortunately, just a few months later, new owners came in, released him from his contract and brought in Andrew Lord.

These days Dave is a coach working for the Okanagen Hockey Academy. However he would relish the chance to coach once again in the UK.

I’ve just discovered your Podcast and wanted to say how much I really enjoyed listening to my first episode, Mario Belanger.
Your Podcast really evoked some great memories.