Garry Unger had an amazing career, with so much recorded content it was impossible to fit everything into one hour.
Therefore for the first time since starting the Podcast I’ve decided to split an episode into two parts. 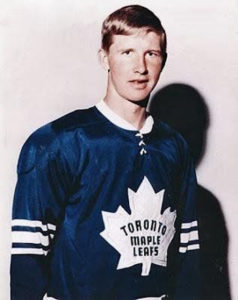 In Part One we’ll be talking about:
His first NHL game.
How he found himself playing on the same line as Hockey Legends Gordie Howe and Frank Mahovlich in Detroit.
Why he was traded from Detroit to St Louis.
Plus,
I couldn’t interview Garry without asking him about his incredible Iron Man streak.

Garry played a total of 1105 NHL games and earned the title of “Iron Man” by setting a then NHL record by playing 914 consecutive regular season games over a period of almost 12 years with four teams, the Toronto Maple Leafs, Detroit RedWings, St Louis Blues and the Atlanta Flames – even more remarkable was that, during the whole of his NHL career, Garry never wore a helmet!
He also went onto play for the Los Angeles Kings and the Edmonton Oilers before retiring from ice hockey 1983. 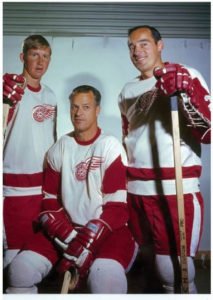 We talk of why the then Detroit Red Wings head coach, Ned Harkness, decided to trade him to the St Louis Blues.
He stayed with the Blues for the next nine seasons, scoring thirty or more goals each season to become a St Louis Superstar.
We also talk of his three seasons with home town club, the Edmonton Oilers, who at that time were a fledgling NHL club containing so much young talent in future superstars and eventual Hockey Hall of Famers, Wayne Gretzky, Mark Messier, Paul Coffey, Glen Anderson,  Jari Kurri and Grant Fuhr.

Tom Stewart, owner of the Dundee Rockets, contacted Garry, looking for potential new signings for his team.
On flying into Alberta, Tom persuaded him to come out of retirement and become the new player-coach of Dundee
So Garry travelled to Scotland to sign for his team and talks fondly of his time in Dundee, Scotland.
Garry tells how he had to learn a new language, Scottish, how to drive on the “wrong side of the road”.
He also, thanks to a club deal, he learned how to play golf. 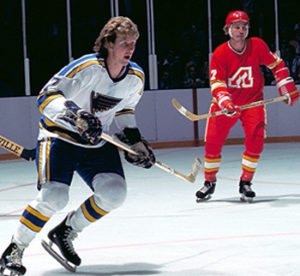 Shout Outs
A big shout out to Sheffield Steelers fan Stewart Marks.
I’ve enjoyed plenty of banter over the years with Stewart but this shoutout is for the genuine Ken Priestlay Pittsburgh Penguins game worn jersey he gave me for my recent birthday
Cheers mate.
Want to listen to Kens Podcast interview, it’s here:
The Ken Priestlay interview
Stewart was very kind give me a second authentic game worn jersey, a genuine Sheffield Steelers Les Mille jersey and although I love the colour, being a Nottingham Panthers fan, I can’t really bring myself to wear it – sorry Stewart.
Once again, if you want to listen to Les’s interview, it’s here:
The Les Millie interview