How many hockey players can say that they know Wayne Gretzky? Not only that but that they played together in the same hockey team, the Brantford Nadrofsky Steelers. They also shared a “back yard ice rink” at home in Brantford Ontario. 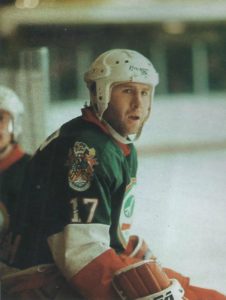 After finishing college in 1980 Gary came to the UK to work in his aunts sports shop in Knightsbridge.
Knowing his love for hockey, his aunt did her homework and found a couple of team in London for him. She managed to secure interest from both the Richmond Flyers and Streatham Redskins Hockey teams.
Gary chose the Flyers simply because it was easier to get to Richmond than it was to get to Streatham.
The downside was that the Richmond rink wasn’t quite up to the quality of the Ontario rinks back home.

The following season Gary decided to move to the Streatham Redskins. This was a bit of a surprise given Gary’s original intension was to:

Spend a year in the UK and then return to Canada
to figure out “the rest of his life”.

The Redskins were a very good team back in the early to early to mid 80’s. They had a rich history, a great tradition, quite a bit of success and a thriving junior development system.
Five years and 436 goals later Gary moved on to become ice Hockey co-ordinator of the new Slough Jets team. 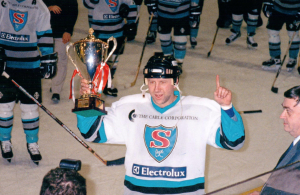 I also give a shout out to the guys at the Cats Whiskers Podcast who continue to produce a great show that is definitely worth a listen.

Finally I give a BIG shout out thank you to all you guys that have and continue to listen to the Old Time Hockey UK Podcast.
Over the last few weeks we have had listeners from the UK,  US, Canada, Australia,  France,  Germany, Japan, Italy, The Netherlands, Russia and Sweden – thanks again guys.