Born in Ontario, Canada, “Wags”, as the fans knew him, learned to skate at 3 years old and began his hockey journey a year later before coming over to the UK at age 8 when his English father, Jack, decided to return to the country of his birth. 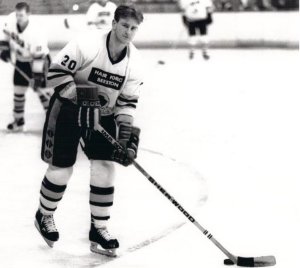 Joining the Streatham junior system Graham progressed through the ranks and made his debut with the senior Redskins hockey team at the age of 15.

Graham shares his memories of that time and also of being a regular in the Great Britain U16’s, U18’s and U21’s teams and also of the other characters within those squads.
We also talk of his move to the Solihull Barons and his short lived return to Canadian Hockey with the Moose Jaw Warriors and his enforced return to the UK over a £100 transfer fee and how, on his return, he “managed” his own signing with the Nottingham Panthers.

Graham talks about Alex Dampier, Mike Blaisdell and Kevin Murphy, the 3 coaches he played under during his Panthers career and their different style of play, the “Tough Guy” in the team and the “Crazy Guy” in the dressing room. 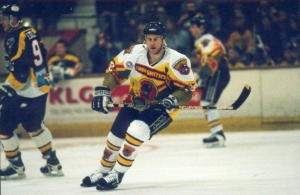 Graham spent the next 8 season playing for the Panthers, playing in both the Heineken and SuperLeagues.

Playing his last season for the Panthers, in the SuperLeague in 1997 – 1998, Graham then moved “down the road” to the Peterborough Pirates the following season, playing a total of just 18 games that season before hanging up his skates.

To this day Graham still lives in Nottingham with his family.

In this episode I also give a shout out to Scott Plews and Frankie Killen, the organisers of the 100 Years of  UK Ice Hockey event that is scheduled for July 31st to 2nd August 2015.

You can also listen to Podcast interviews from Graham’s alumni of former Nottingham Panthers players: