We talk about his early years growing up with a famous hockey dad, the former Philadelphia Flyers forward and “Super Star” of his era, Reggie Leach and how his 1987 third round draft day pick, by the Pittsburgh Penguins, came as a complete surprise to him. 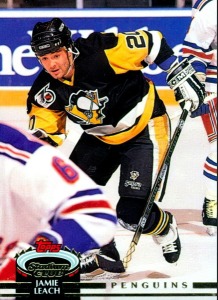 Jamie tells us about his time at Pittsburgh, his debut against the New York Rangers, the  1991 – 92 back to back Stanley Cup winning teams and the stars that wore the black and yellow jersey, the depth of the Penguins team and consequently the difficulty of breaking into line up.

We also talk of his decision to leave the club by asking to be traded, the move to the Hartford Whalers and why he was to subsequently regret the move.

Later Jamie speaks of how former Penguins team mate Ken Priestlay, was pivotal in his decision to come to the UK to play for the Sheffield Steelers and why after just one season in Sheffield, Jamie decided to move 40 miles down the M1 motorway to sign for coach Mike Blaisdell at the Nottingham Panthers. 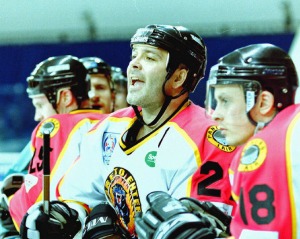 We discuss his four years in Nottingham, his feeling about being made captain of the club, of the characters of the Panthers team and about the Nottingham Ice Stadium itself and the end of an era as he watched it being demolished to make way for the new National Ice Centre (NIC).

Finally Jamie tells us about his life today and about how, together with his dad Reggie, he utilises all of their accumulated Pro Hockey knowledge to successfully run his own Winnipeg based Hockey Business.

I give a big thank you Shout Out to “Ex Muse Fan” for leaving the Old Time Hockey UK Podcast a 5 star rating and review on iTunes and share how reading the reviews  gives me a boost and helps others to discover the Podcast.

I also give a Get Well Shout Out to former Fife Flyers and Murrayfield Races D Man Scott Plews of the 100 Years UK Hockey Celebration of Ice Hockey website after a successful operation on his back.

You can also listen to Podcast interviews from Jamie’s alumni of former Nottingham Panthers players: