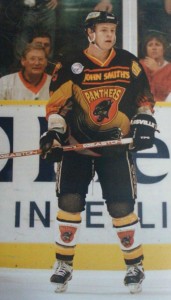 Marc was a product of the excellent Nottingham Junior Hockey system.
He started with the Tiger Cubs at just 7 years of age and progressing through the Nottingham junior ranks.
At the age of 15  Marc was called up into the senior squad, the Nottingham Panthers

Marc reveals how Nottingham Panthers famous legends, Fred Perlini and Jimmy Keyes christened him “Smurf”,  a nickname that has stuck with him ever since.
“Smurf” also talks of his mentor Paul Adey, the experience of playing in the ‘Old Barn’, the Ice Stadium on Lower Parliament Street in Nottingham and of the quality British guys that were in abundance in every team ‘back in the day’.
He also talks about the ‘Crazy Guy” in the locker room, the pranks he played and the pranks suffered.
We talk about fighting within the game and the tough guys that prowled the SuperLeague.
The interview just couldn’t be complete without talking about the rivalry between UK Hockey’s biggest rivals, the Nottingham Panthers and the Sheffield Steelers.

He talks of the highs of playing for his country and the lows of being released by his home town club;

I really thought I’d always be a Panther, I was devastated when they released me.

He also has a few stories to tell about his time with the MK Kings and the Coventry Blaze.
I caught up with Marc one afternoon whilst in his local Costa Coffee store (hence the occasional back ground noise).

You can also listen to Podcast interviews from Marc’s alumni of former Nottingham Panthers players: