Being a Nottingham Panthers fan since the early eighties, I was more than interested to read this excellent Blog post by another long time Panthers fan, Ian Braisby.
Ian’s musings stirred plenty of memories for me and more than a few nods of agreement. It was his “home from home” he says, a sentiment that every other Panthers fan, including myself, will identify with.

Memories of the Nottingham Ice Stadium
By Ian Braisby 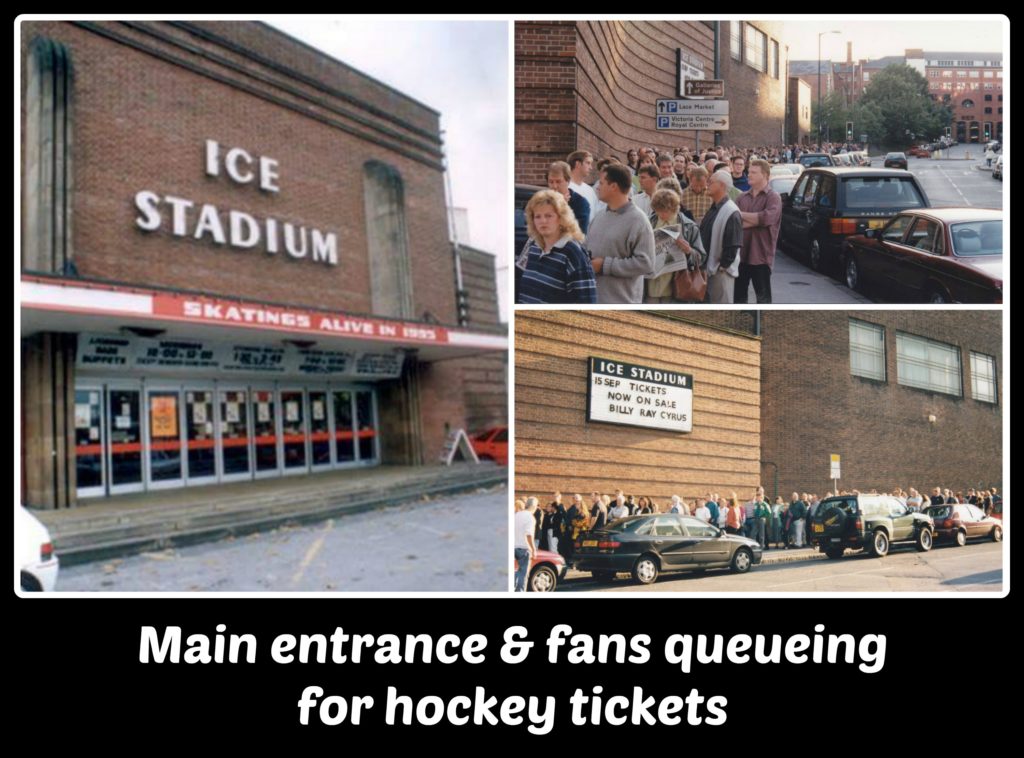 Every Nottingham Panthers fan of a certain age will have stories about our old Nottingham Ice Stadium. The rink closed in 2000 as we moved into the much bigger, much more modern National Ice Centre.  Indeed, the charity e-book I was recently involved with – “Voices In the Crowd” – contained a couple of contributions sharing memories of the place.  Needless to say, I am no exception, which I guess must mean I am now officially, by my own definition, “of a certain age”.  I remember that unique atmosphere, the great (and plenty of not so great) games and players that the ice stadium played host to, all the amazing nights of Panthers hockey.

I’m just one of 2800 who can tell those stories, but the building had plenty of personal memories too.
Essentially, it was the backdrop to my childhood, teenage and early adult years.  I started going to matches there when I was 7 and I was 27 when we left, so that’s some pretty formative years right there.  That’s why I’m not going to write about the first time we beat our early rivals Streatham, or the unbelievable atmosphere and heroic performance against Manchester in the 1998 cup semi-final, or the touring Canadian team Don Mills Comets.
I want to remember how it felt to be a kid and to grow up at the Nottingham Ice Stadium.

My overwhelming recollection about the old ice stadium is how comfortable I was there (and I’m not talking about the benches here) from within a few months of when we started going.  It’s no exaggeration to say that, other than the houses I’ve actually lived in, it is the place I have felt most at home in my entire life.  Just like a familiar home, I can recall the look, feel and (of course) smell of every inch of it.  I could walk in there tomorrow (if only) and find my way around as though I had never been away.  No matter whether the team was good or bad, and believe me sometimes they were very bad, whether we won or lost, or what was going on in life outside that building, I would always feel good in the ice stadium. 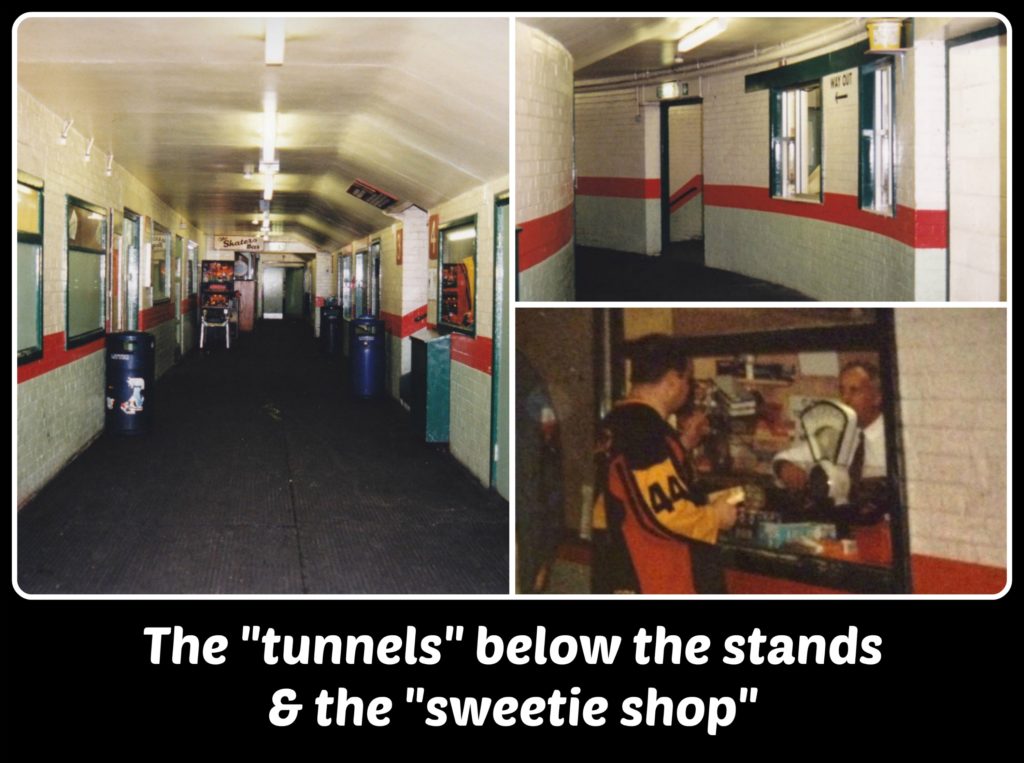 Our home within home was, for most of the time we spent there, Block 2 Row N, at the end of the row closest to Block 3.  Second to back row, and I’ve always loved watching hockey from a bit higher up – I sit three rows from the back at the NIC now in fact.  Within easy shouting distance of the penalty box, as we and those around us proved on many occasions.  And with a great view of the whole ice, apart from the odd occasion when weather conditions outside made it a bit foggy at the start of the match.  There we sat – my two uncles, my dad, my sister and me.  Apart from my dad, who has now passed away, the rest of us are still season ticket holders.
Sitting by the steps meant an easy escape at the end of each period, but of course where we went changed as time went on.

During the early years, it was the famous sweet shop and/or the merchandise stall. Then all the way round the concourse – although it was really more of a tunnel I suppose – to the corridor outside the dressing rooms, where a gang of kids hung around to see their heroes as they came back out for the next period.  If you were lucky, you got the early 80’s equivalent of a high five or fist pump.
On one memorable occasion, Panthers’ hard man Gordie Patterson whipped my black and gold cap off my head and skated onto the ice with it perched atop his helmet.  After the match, it was down to the boards to get a handshake or pat on the head from players during the lap of honour.
It’s worth mentioning that I, my sister – three years younger than me – and (and as far as I know) the other kids too, did all this wandering around the ice stadium without much parental supervision at all.  We sat with dad and our uncles, but other than when the game was in progress we were free range.
Times have certainly changed in that respect, too.

As childhood gave way to teenage years, the hooter meant a dash to the bar – we were lucky as the entrance was directly opposite the steps from our block – for a swift illicit beer.  In later years, round to the bar near the dressing rooms to catch up with friends and have a cigarette – if you were lucky, the odd player came out of the dressing room for a quick smoke too. But as the years went on and we got older, match night was always about the routine.  We went up the same bit of the stairs on the way in, showed our tickets to the same person at the top, went to the same 50/50 seller, got food and drink at the same times and from the same outlets – game after game, season after season.
It was home and just like at home you are totally in your comfort zone when you’re there. 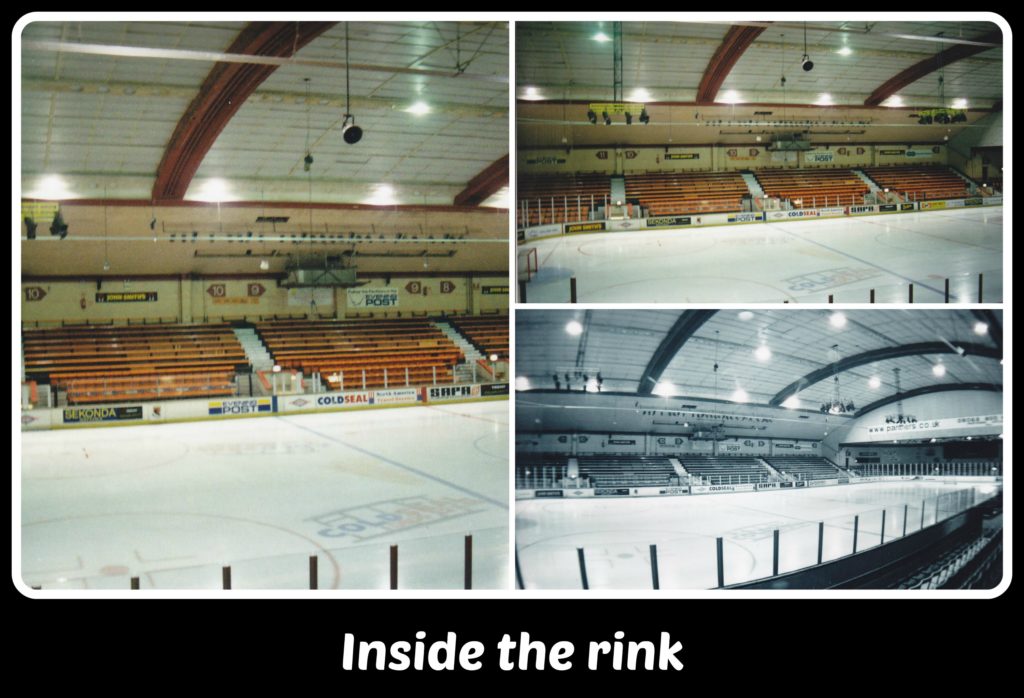 My feelings when the new stadium was announced were mixed.  On the one hand, there was optimism that we would become a bigger team and finally be able to compete with that big-spending, high and mighty arena team from up the M1.  But of course there was also the sadness and nostalgia for the end of a great era that had shaped the spirit of our club and our attitudes as hockey fans.

The final match at the ice stadium is well documented and it was certainly an emotional occasion.  For some reason, rather than our usual bus trip we got a lift off my uncle, just as we had when we were kids, and we were all reminiscing about the times and faces that we’d known together in that building.  I was sitting in an unfamiliar area – I moved around a bit in the last couple of years – and for the first and only time found myself behind the goal.
I’d expected to be in bits at the end, but had not anticipated standing in floods of tears during the national anthem – a grown man and I didn’t even make it to the opening face-off dry eyed.
The game itself was a non-event.  But everyone recalls the aftermath.  You know the phrase “they’ll take anything that’s not nailed down”?  Well, in this case something being nailed down was no impediment, as Panthers fans got to work with an impressive array of tools to take their own souvenirs of the building.
We have our bench from Block 2 Row N – it lives behind my sister’s sofa and sometimes we’ve been known to watch a match together on TV at her house and put it on the sofa to sit on it.  And that was that, a crazy night that was somehow a fittingly eccentric end to a building of such character, which was one of the great venues in a more spontaneous, less professional era of British ice hockey. 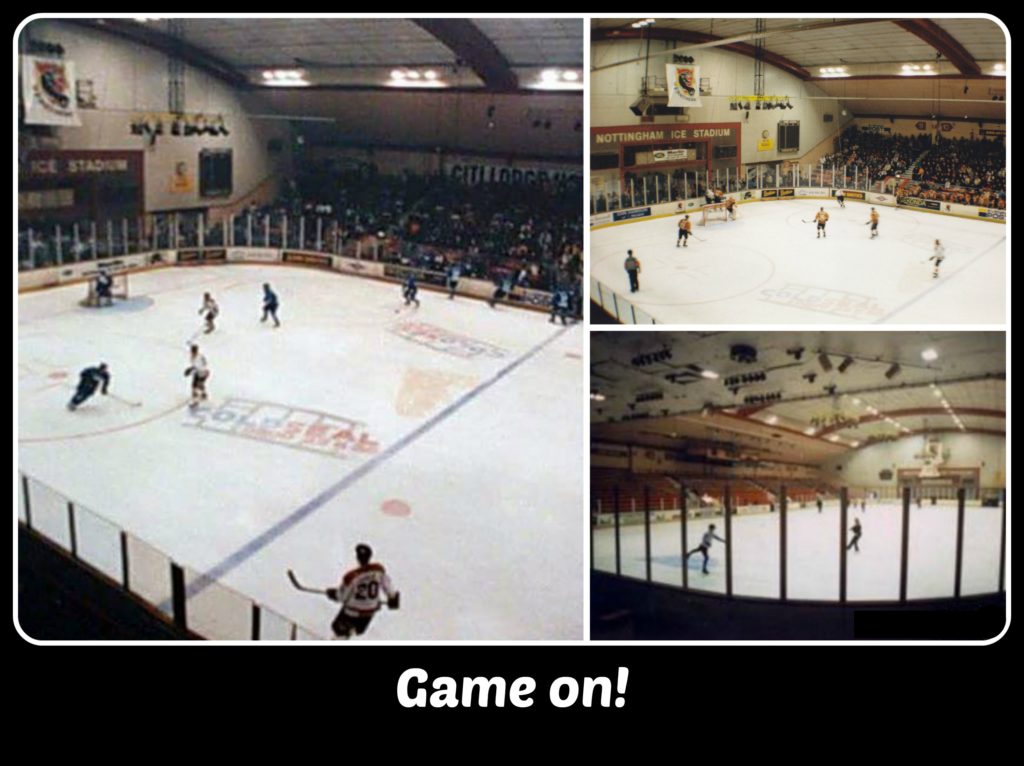 Actually, the story doesn’t quite end there.  That summer, after the demolition work had started, we went to the Cricks (the Cricket Players, “our pub” adjacent to the ice stadium for the uninitiated) for a few drinks to celebrate a friend’s birthday.  While waiting for our lift home, my sister and I wandered over to look at the old stadium.
It had no ice pad of course, no roof and the outer walls were partially demolished.  But the basic shape was still largely intact.  We looked at each other, obviously both having exactly the same notion – and before we knew it we were clambering over the construction site fence.
The first thing we did was grab a brick that was lying around – it was from somewhere in the corridors, as one side had that horrible flecked paint that I’m sure we all remember.
Then we were at centre ice, just standing there in silence, soaking up the atmosphere one last time.  It was a personal farewell in a way it could never have been at the final game.
When the wrecking balls moved in, I felt like they were knocking down not just a building but my youth as well, and I am grateful I had the chance to say goodbye to both of them properly.

It’s strange to think now that we have been in the NIC for almost as long as I watched the team at the ice stadium.  Of course I enjoy going there, I feel comfortable, we have our match-night rituals and it is a great place to watch hockey.  But it will never compare.  No matter how many league championships we win there, no matter how good the players are and no matter how many memories we get to share in the place.
It’s our home arena but, for me at least, it will never truly be home.

However, it’s not cheap  maintaining this website in order to bring you Podcasts and Blog posts, that’s why I’ve chosen to use Patreon to ask for donations to keep the Podcast going.
You can really help the show by donating say, just $2 per Podcast episode (about £1.40) for the price of a cup of Coffee or the price of a Beer at $6 (about £4.20) – you really will be helping to keep the show going.