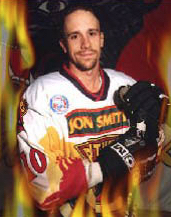 Having previously played hockey in Canada, Randall had watched the Nottingham Panthers, as a fan, a few times. However it was a few years before the Panthers evolved into a full ice hockey club. As soon as the Nottingham junior hockey development section was created, he had no hesitation and quickly signed up.

A few years later and Randall was given his chance with the senior Panthers team. He made his debut during the 1985 – 86 season  in front of a capacity 2300 Lower Parliament Street crowd.

That season was quite memorable for Randall and the team, the unwanted highlights probably being the 2 bench clearances when  Scottish teams, the Murrayfield Racers and the Ayr Bruins came to town.

Fast forward 16 years and we discuss another bench clearance, this time in the Panthers new home, in the  National Ice Centre against their fiercest rivals, the Sheffield Steelers.

Randall played a whopping 845 times for the Panthers, his only professional club, before retiring, the club paid him the huge honour of retiring his #10 jersey in recognition of his achievement.
A few years later the opportunity arose to return home, with his family, to Canada to work as operations manager at Rexall Place, the home of the Edmonton Oilers.