In today’s show I interview former Southampton Vikings, Dundee Rockets, Medway Bears and Bracknell Bees D-Man Rob Breskal.
Now living in New South Wales in Australia, Rob was born in Brighton on the UK’s south coast – a town with a rich hockey history but no proper Ice Rink since 1965 – a year before Rob was even born! 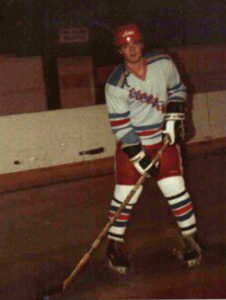 He talks of how a chance visit to a small back street Brighton garage introduced him to hockey.

We’d go ice skating on a Sunday lunchtime to the tiny Brighton rink, it was about half the size of an end zone in a proper ice rink.
On this Sunday all these little ice hockey kids were there skating around.
Apparently the Streatham Ice Rink had closed for a refurb and so the team came to Brighton to train.

Rob became the newest recruit to the Streatham juniors, first playing for the U14 Braves and then the U16 Scorpions.
Two seasons later having heard of the formation of a new Brighton Royals team, he left Streatham to “go home”. The only problem, the team had no home ice, they had to play all their games away for double points!

Rob’s next stop was Southampton, he’d been “spotted” by the Vikings Canadian player coaches, “the Simms Twins”, he was invited for a trial and was amazed to be offered a contract, he recalls: 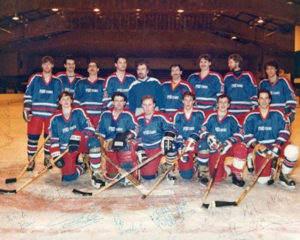 They offered me Twenty Quid a week plus travelling expenses and I got all of my hockey kit for free.
That’s where, at the young age of 17, I first heard the term win or lose, always booze.

The Vikings had a terrific season, winning the first division Championship and so promotion to the Premier league.
Unfortunately for Rob that meant, because of a bet, he had to run around the inside of the rink absolutely stark naked!

During this time Rob was chosen to play for the Great Britain U19 team and with fellow line mates Tony Hand, Ian and Stephen Cooper and John Iredale helped the team finish as runners up to Hungary in the 1984 European Championships Pool C. 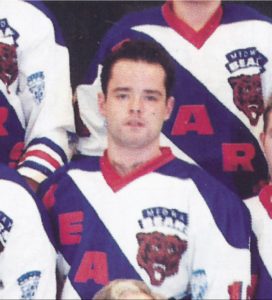 An exciting season followed, they finished Heineken Wembley Play off Championship runners up and won the Scottish Cup.

By the end of the 1985 – 86 season a home sick Rob returned back to the south coast.
His next stop was the Medway Bears, he spent the next four seasons with the club, mostly as their captain.
In the summer of 1990 the Bracknell Bees came a calling, making him an offer he couldn’t refuse!
He recalls.

I was very happy at Medway and had expected to end my career there – but Bracknell came in for me and offered to double my wages, what could I do? 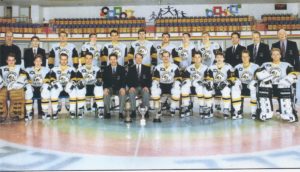 So Rob signed for the Bees and was immediately voted by the other players as team captain.
Joining Bracknell was a good decision, the team finished third in the Heineken first division and were promoted to the Premier by finishing top of their Playoff group.
A successful season in the Premier division followed.
The following season, after just 17 games, Rob departed from the Bees after the club decided to terminate his contract.

After retiring from hockey Rob studied as a mature student, went onto the BBC’s Weakest Link show and won it. The show’s presenter, Anne Robinson nicknamed him “the third gay Mitchell brother”.
Why gay (when he’s not), well you’ll just have to listen to the Podcast.

Today’s shout out goes to “Oscar Brownsword” who gave the Podcast a 5 Star Review on iTunes.
He wrote:

Superb Memories
“Just found this and the interviews with Frankie Killen and Mario Belanger brought memories of happy nights down the Riverside flooding back.
Would love to hear either “Mighty Mike” or Ivor Bennett in future, I bet the latter has a tale or two.
Cheers, keep up the great work

Thanks Oscar, I’ll see what I can do.