We talk of how he had no hesitation in travelling over 4000 miles from his home in Medicine Hat, Alberta Canada for the 100 years UK Ice Hockey event, held in Durham in August 2015.

I couldn’t think of a better event to attend after being part of UK hockey. It really was great to see old friends and buds that’s for sure.

Brian’s UK adventure started back in 1984, he left Canada, aged 24 and landed in Scotland via Holland and Belgium. He spent 3 years with the Aviemore Blackhawks in Scotland.
He openly admits that, at that time, he didn’t have a clue where Scotland was! 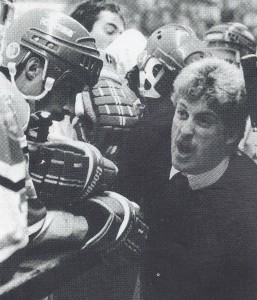 Arriving initially as a player, Brian soon became the player-coach and lead the team to the 1986 – 87 British League Division 2 Championship and also the Playoff Championship, beating the Cardiff Devils, in their own barn, in Cardiff, in the Playoff final.

After leaving the Blackhawks he was approached by Cardiff Devils supremo John Lawless, who was looking for a bench coach and decided that Brian was the right man for the job.

At the same time John also signed Brian Wilkie and the late Brian Dickson – two of the Blackhawks best British players. It turned out to be a really good move for all as the Devils won the Autumn Cup, defeating the Trafford Metros 11 – 10 on aggregate.

What was to follow during the next two seasons was nothing short of astonishing.
John Lawless signed young British stars Ian and Stephen Cooper from the Durham Wasps and with the addition of top Canadian import, Steve Moria from the Fife Flyers, the Devils promotion push took off big time. 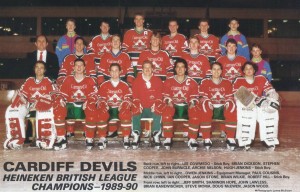 By the end of the 1988 – 89 season the Devils had been promoted as Champions of the First Division, replacing fallen Premier Division giants, the Streatham Redskins.

The following season, 1989 – 90, was even better as not only were the Devils crowned Premier Division Champions but they had also won the Wembley Playoff Championship, beating the Murrayfield Racers, eventually on penalties, after being 0 – 3 down, in what has often been described at the “best Wembley Playoff Final ever”
Add to that the “Coach of the Year” title for Brian and that season will live in Brian’s memory for a long, long time. 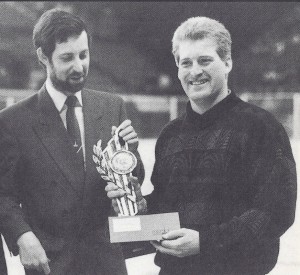 Coach of the year Brian

With his contract due to expire, Brian Kanewischer surprised many people by returning to Scotland to coach the Ayr Raiders.
Regrettably his time there, mainly due to the perilous financial position of the club, only lasted a season.
Over the next few years Brian moved on to coach the Fife Flyers to promotion back to the Premier Division.
After a brief stop over at Oxford he signed on to coach the Swindon Wild Cats for a season.
Brian explains.

After leaving Swindon my wife and I decided to return home to Alberta.
I’d had 10 very enjoyable and successful years in the UK, but it was time to go home.

Thanks for all the memories Brian.

You can listen to Podcast interviews from John’s’s alumni of former Cardiff Devils players:

In this episode I give shout outs to:
The Nottingham Panthers for winning the 2016 EIHL Challenge Cup, their seventh in nine seasons.
Second shoutout to the Sheffield Steelers, new Elite League Champions 2015 – 16, their second league title in 2 seasons.