Kel or Lando, as most people know him, was born in Sevenoaks in Kent, the product of a British mother and a three quarters North American Indian father serving in the Canadian forces. 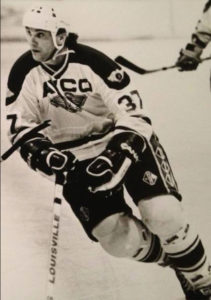 Kel tells of his formative years, learning the game, initially in Germany,  back home in New Brunswick, Canada and then Winnipeg where his father requested his last military posting.
We also talk of his early Pro career when, as a 21 year old, he was drafted into the fledgling South West Hockey League, finding himself in such exotic places as Reno Nevada and El Paso in Texas.
A few years and a number of teams later, a chance conversation at a North American Indian hockey tournament led him back to the country of his birth and a UK career beginning with Sunderland’s Crowtree Chiefs and ending with the Paisley Pirates in Glasgow – with a further 10 British hockey teams squeezed in between.

Kel talks of his fight with the BIHA over his “import status”.
Why he never slept on bus trips, his two marriages failures and what he thinks of present day hockey.

All this and much more, in fact I needed to cut our 120 minute conversation down to under 50 minutes.
Maybe later I’ll produce an extended version – if you’re interested in hearing an extended version – let me know.
Later in the Podcast, and for the first time ever, I’ve included a bloopers section which is guaranteed to make you smile. 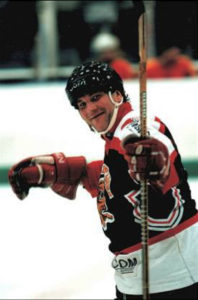 Do these guys know something you don’t?
Absolutely!
Not only do they receive my Free monthly email Newsletter telling them who’s up next before anyone else but they also get to know who else is “in the can” awaiting post production.

There’s also a few other surprises coming soon that even my subscribers aren’t aware of yet.
To receive my Free monthly email Newsletter simply enter your name and email address in the box below.

Right now I have three interviews already “in the can” want to know who they are – then fill out the form below.