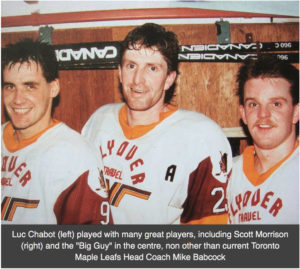 The following season he was back in the UK, this time as a replacement import himself, signing for the Whitley Warriors in December 1987, joining up with fellow imports Scott Morrison and a certain D-Man, the current Toronto Maple Leafs head coach, Mike Babcock.

It was a winning season for the Warriors, the team finished runners up in the Heineken Premier Division, just two points behind winners the Murrayfield Racers. They also reached the Wembley Play Off  Finals weekend for the first time in their history, eventually going down 13 – 5 in the semi finals to the Fife Flyers.
The Wembley weekend was always filled with rumours of who had been seen talking to who and who maybe be signing for who. Consequently one of those rumours turned out to be true, as Luc recalls:

At Wembley I was approached by Kevin McNaught of the Medway Bears, he offered me a job. Whitley were looking to make a change by signing Hilton Ruggles and so I signed for the Bears, it was as simple as that. 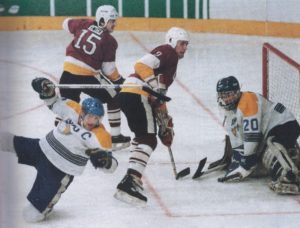 It was a  frustrating 1988 – 89 season, the Medway Bears had a team capable of topping the table, filled with quality players, such as Kevin McNaught, Ken Federko, Rob Breskal, Dean Edmiston, Gary McEwan, Gary Brine, Andy Leggat and Tony Goldstone but competing with a John Lawless built Cardiff Devils team destined for the very top, they could make the runners up spot.

Two more seasons with the Kent club followed before Luc moved to Italy, playing for Sterzing/Vipiteno for a season before returning to the UK for two seasons with the Solihull Barons. Then followed a split season with Dumfries and Medway before linking up, for three seasons, with coach Paul Thompson’s Solihull Blaze – it was a link up which was to pay dividends for both guys a few seasons later. 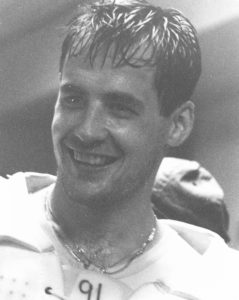 In 1999 the Isle of Wight Raiders came a calling and Luc, as player coach, led the team to a championship before moving on after three seasons, to a similar position with the Peterborough Phantoms.
As it turned out, Peterborough wasn’t one of his best of moves, as he recalls:

We had lots of local guys, lots of little cliques, we were top of the league with, I think, a 20 – 4  record, when one day I read in the local newspaper that I was being replaced – but that’s hockey!

Stints, as a player, for Romford and then as bench coach for the Basingstoke Bison followed before Luc teamed up once again with head coach Paul Thompson.

The Coventry Blaze offered him a duel role as assistant coach and manager of their newly opened Hockey Shop.

In the nine seasons that followed, Luc was part of a Blaze organisation that won:
Four Elite League Championships, one Playoff Championship, two Challenge Cup trophies, a Knockout Cup and a Charity Shield. Not a bad record for a “small town” club.
Luc talks of the satisfaction of continually being ahead of the leagues’ so called bigger teams.
He tells of tough guys McNamara, Payette, Carlson and character players like Cloutier, Carlson, Poirier, Martin, Tait and Adam Calder.

Canadian Luc spent 28 years here in the UK as player, player coach and bench coach.
In 2014 he decided to return back home to Ottawa, Canada – where he continues his coaching career.

You can also listen to Podcast interviews from Luc’s alumni of former Whitley Warriors, Medway Bees and Solihull Blaze players: 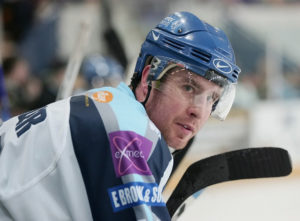 News recently broke that the Blaze’s former iconic striker Adam Calder has been battling cancer for the last two years.
The Coventry Blaze will be announcing various ways in which you can support, donate and contribute towards the ‘Support25’ campaign to help Adam
Despite several surgeries and therapy to fight the disease, Adam’s health is still greatly affected.
He is now seeking new treatments and medications that are not available under the NHS.
This may require the need to travel abroad to seek further treatment not accessible in the UK. The costs for these treatments are significant.
More details of the campaign can be found on the Blaze website here:

A Just Giving donations page has also been set up and can be found here:
JUST GIVING

I’m sure you’ll join me in wishing Adam all the very best and hope that his  ongoing treatments are a complete success.
Please use the hashtag #Support25 on social media to help raise awareness of this important campaign. 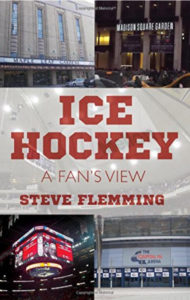