In today’s show, the final Podcast of Season 2, I interview former Nottingham Panthers back up net minder Paul Blahyj. 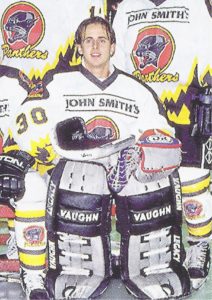 I start the interview by asking a very important question – how does he pronounce his last name of Blahyj?
Paul explains that the name hails from the Ukraine through his grandad, however in the UK Blahyj is pronounced Bly.

Paul spent 12 years learning his trade in the Nottingham junior system, playing for the Tigers, Cougars and Jaguars alongside Ashley Tait, Simon Hunt, Marc Roberts, Marc Twaite and good friend, the late Gary Rippingale.
It was a time when the Nottingham Ice Stadium was really buzzing with quality local talent.

However his was soon brought back down to earth when he made his debut, he recalls:

We played a friendly at home against the Durham Wasps, seeing my name on the back of a Panthers shirt was a very proud moment for me.
The game ended in a 10 – 10 tie, my dad didn’t go to many games, but he came to this one – it was his first and last game!

Paul also recalls his initiation to the Panthers team, he was stripped naked at the back of the team bus then had to run past the players girlfriends and club directors at the front of the bus to retrieve his clothes!

We go on to talk about the 1994 Bensons and Hedges Cup Final victory, 7 – 3 over the Cardiff Devils.
Coach Blaisdell gave him a moment he would never forget, giving him the last 34 seconds of the game.
Again Paul recalls:

It was a sign of the man, Mike didn’t have to do that, he could have just left me on the bench for the experience.
It was a fantastic gesture, one I will be forever grateful for.

The following day, the newly crowned Benson and Hedges Champions had to travel to Cardiff to once again face the Devils.
Although the match finished in a 6-6 tie it would be forever remembered for another reason – a bench clearing brawl that involved every player, including Paul, he recalls:

The benches cleared.
As I jump off the bench I see all these big hairy brutes coming towards me.
Fortunately I grab onto a young Stevie Lyle and agree to stand and watch.
Then a very angry Devils coach, Paul Heavey, shouts over to warn me that if I lay one finger on Stevie
he’ll wrap a stick around my head! 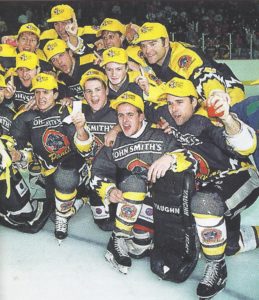 It was a night he will never forget.
After the game the Panthers team had to have a police escort out of Cardiff!

We delve more into that 1994 – 95 season.
We discuss of “that game” in March 1995 when the Sheffield Steelers gained an
8 – 6 victory in Nottingham.
It was a victory that snatched the league championship title from the Panthers grasp.

Bitter disappointment followed and Paul gives his opinion on where the cracks started to show.

When the season ended Paul Blayhj decided to retire from the game, he’d achieved his dream to play for the Nottingham Panthers, played in a cup final and had experiences that most of us would give our right arm for.
Did he ever regret his decision to retire at just 20 years old,  you’ll find the answer by listening to the podcast.

Today’s shout out goes to Phil Burkin who emailed me to say:

Thanks for the email Phil, leave it with me, I’m already working on it.