In today’s show I break with my policy of interviewing only “players from the past”.
Nicky Chinn continues to play on, despite making his debut in the 1988 – 89 season, that’s 29 seasons ago. 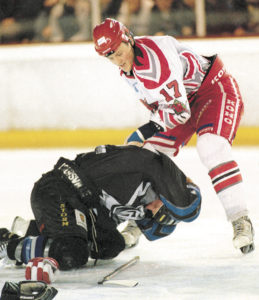 A product of the Cardiff junior development system, Nicky made his Devils debut at the tender age of just sixteen.
It was a promotion year as the team climbed into the BHL’s Heineken Premier division.
Remarkably Nicky had only taken up the game 2 years earlier and even Cardiff Supremo John Lawless had his doubts, telling him

You won’t make it as a professional – you’ve started too late.

It’s not often that John Lawless was wrong about hockey players, but he certainly dropped the ball (or puck) that time!
Nicky went on to play a total of 1033 regular season games for the Cardiff Devils, Sheffield Steelers, London Knights, Guildford Flames, Bracknell Bees, Slough Jets, Nottingham Panthers, Basingstoke Bison and MK Lightning.

We talk about his debut for the Devils 29 seasons ago and although he only had a few shifts that game it gave him a taste of things to come. His first few seasons were mainly as a bench warmer but at the same time he was gaining invaluable experience. This never worried Nicky, well he was still a big Devils fan and had the best seat in the house.

Nicky spent 7 seasons with Cardiff which coincided with the teams most successful period ever.
The early nineties were definitely the glory years for the Devils. They were Premier division champions twice, runners up twice and Wembley Playoff champions twice.
Cardiff also won the Autumn Cup once and were also runners up too.
In 1993 Cardiff reached the pinnacle of British hockey by winning the Grand Slam.

By this time Nicky was developing into a power forward who dropped the gloves whenever necessary and took no prisoners. Go to Youtube.com, type in Nicky Chinn and you’ll see what I mean – you’ll be entertained for hours! 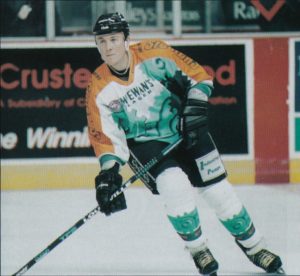 In 1995 Nicky made the decision to leave Cardiff, moving north to join Alex Dampier’s Sheffield Steelers.
Sheffield made him a financial offer he couldn’t turn down and one the Cardiff Devils wouldn’t even attempt to match.
Ironic really, only a few years before, Cardiff were regularly accused of “cheque book hockey”, now it was Sheffield’s turn.

The Steelers had put together an extremely strong team, with players of the caliber of Tony Hand, Ken Priestlay, Ron Shudra, Scott Neil, Wayne Cowley, Tommy Plommer and Les Millie.

We spoke of how the Devils fans reacted when he returned to play in Cardiff as a Steeler, he recalls;

I was shunned, totally.
To the fans I couldn’t have gone to a worse team than Sheffield, it was tough.

Unsurprisingly, the Sheffield Steelers went on to win the Grand Slam that season. It was the clubs first and Nicky’s second, he’d already been there with the Devils “Class of ’93”. 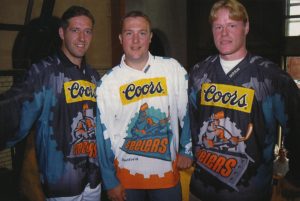 After 3 seasons in Sheffield he was enticed back home to Cardiff where former team mate Paul Heavey now coached.
Heavey had built a strong side but, in his second season, differences with the coach arose and at the end of the 1999 – 00 season Nicky chose to move on.
A brief spell in the SuperLeague with the London Knights followed before he chose to drop down to the British National League, playing a season with the Guildford Flames.
Nicky went on to wear the jersey’s of the Bracknell Bees, Slough Jets, Milton Keynes Lightning, Basingstoke Bison and also 11 games for the Nottingham Panthers in the UK’s top Elite Ice Hockey League.

Back to the Present

This season Nicky has gone back to his roots, playing for the Cardiff Fire in the National Ice Hockey League (NIHL).
Which is currently the UK’s 2nd tier of hockey.
Hopefully Nicky can lace up his skates for one last season next year, it’ll be a milestone thirtieth season – I truly wish him well.

You can also listen to Podcast interviews from an alumni of former Cardiff Devils and Sheffield Steelers players here:

Plus these terrific Blog Posts: