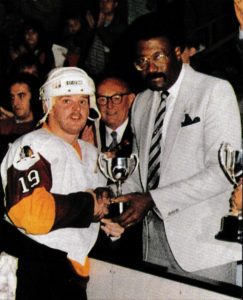 At the end of the 1986 – 87 season Scott had decided to retire.
He was a member of the Brantford Motts Clamatos Allan Cup winning team, lead the play offs in scoring and was voted MVP of the Championship winning series.
He’d decided to retire from the game at age 22 and took a full time job with shipping giant TNT as an assistant manager with their home delivery service.
However, by an amazing twist of fate, his life was to take an incredible turn.
As Scott explains;

One Tuesday afternoon, I received a call from a player agent asking if I’d like to go play in England!
The player agent had called my old coach to check another players CV, this player had copied my achievements and stats to his own resume!
The coach immediately recognised this and gave the agent my number
3 days later I was stepping off a plane at Newcastle Airport.

Scott flew out on the Saturday night, landed the next day and instantly became a hero with the Warriors fans.
He recalls;

I landed in Newcastle Sunday morning, played against the Billingham Bombers that evening and despite being out of condition and carrying a few extra pounds, I managed to score a hat trick. 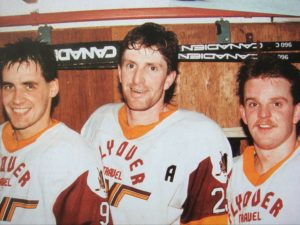 By the end of the season the Warriors, with other imports Luc Cabot and current Toronto Maple Leafs coach, Mike Babcock had had their best season ever.
The team had finished as league runners up and Wembley Play off semi finalists.
Scott was the League’s top scorer and Player of the year.

We move on to talk of his time with his other teams, the Humberside Seahawks, Billingham Bombers, Basingstoke Bison, Newcastle Warriors and the Ayr Scottish Eagles.

I also ask about his part as an “extra” in an episode of the TV series Spender, staring Jimmy Nail.
His words;

All in all Scott had 10 terrific seasons playing hockey in the UK.
He met his wife here and his daughter was born here and all because some other player had tried to cheat the system by using Scott’s resume as his own!
It’s a funny old life!

You can also listen to Podcast interviews from Scott’s alumni of former team mates: