Charlie spent 20 years in the UK. Apart from two seasons in the Heineken Premier League, he played mostly in Division 1.

He then coached the Slough Jets to a League Championship in his rookie season. Moving on to Basingstoke and winning back to back Benson and Hedges Plate Championships with the Basingstoke Bison 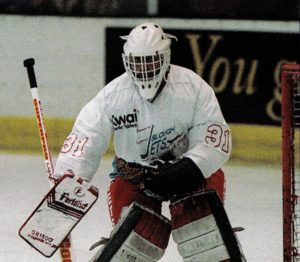 Growing up on the gritty streets of New York City’s “Hells Kitchen” and with no available ice,  Charlie played roller hockey.
In 1977 he flew over to the UK with his mum, he was just fifteen years old. His mum, a Londoner by birth, had decided to return home to the UK.

I didn’t even know that there were ice rinks in the UK, let alone ice hockey!

After a little research his mum discovered the nearby Richmond Ice Rink and Charlie was invited down for a trial.
The management liked what they saw and within days he was practising with the London Phoenix Flyers.
His team mates included Barry Gage, Geoff Delderfield, Chris Scammon, the legendary goalie Monty Wise and Gary Stefan.
After two seasons Charlie returned to New York to go to college, returning to London after graduating. The London Phoenix Flyers, now the Richmond Flyers, were competing in the Heineken First Division.

In 1984  the Southampton Vikings had just been promoted to the Premier Division. Team coaches Brian and Bruce Sims were looking to strengthen their squad for the new season.
Although a native New Yorker Charlie had been classed as “British trained” and not as an import. This was a big advantage to the Vikings as they could still play their 3 imports plus Charlie.
The incentive of playing Premier League hockey was an opportunity not to be missed, the south coast was calling.

Charlie played 34 Premier League games that season and was voted to the league’s “All Star B Team”. Unfortunately the team itself found the step up from division 1 much too great, they finished bottom and were relegated.
Their season highlight was beating the Nottingham Panthers 3 – 2 in Southampton to end a 20 game losing streak. The result had serious repercussions on the Panthers as, after the game, team manager Gary Keward resigned. Gary had been the driving force behind the reformation of the Panthers in 1980.

Next stop for Charlie was Premier Division team, the Cleveland Bombers from the North East. At that time the area was a real “hot bed of hockey” that Charlie was keen to experience. So he signed up and joined imports Jim Earle, Kel Land and Gord Sharpe at the Billingham rink.
Charlie talks of how he relished the thought of playing in locals derbies with the Durham Wasps and the Whitley Warriors.
However, the team suffered a glut of injuries throughout the season and could only manage a third from bottom place in the league.
At the end of the season he decided to return south. 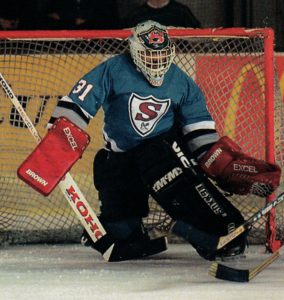 It was 1986, Gary Stefan had left the Streatham Redskins to form a brand new team. Gary had also played as an import in the same 1980-81 London Phoenix Flyers team.
After listening to Gary talk of his plans, Charlie was hooked, as he recalls:

It began a 13 year association with the Jets, 12 seasons as a player and 1 season as a BNL League Championship winning head coach.

We move on to talk about several successful seasons, including the Division 1 Championship winning season of  1989-90 and the Division 1 South Championship season of 1993 – 94.
Charlie also talks of the rumours of the Jets not wanting to win promotion, something that they eventually put to rest by gaining promotion to the Premier division in 1994 – 1995. 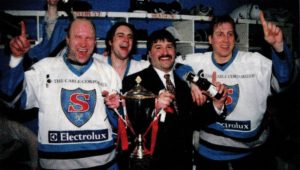 The time had come to hang up his skates and Charlie was given the opportunity to go into coaching.
As a result, in the summer of 1998 Charlie became the Jets new rookie Head Coach.
It was an inspired decision, the team won the BNL Championship before moving onto the Basingstoke Bison where he won the Benson and Hedges Plate, beating former club Slough 5 – 1.
The following season, despite having a head on car accident two weeks earlier, Charlie took the bench and coached the Bison to a 3 – 2 victory over the Guildford Flames to retain the trophy.

Charlie chose to move away from coaching and made the step up into rink management with Basingstoke rink operators Planet Ice as Director of Hockey Operations, renewing his association with Planet Ice director Mark Johnson. Mark had been a junior team mate of his at Cleveland.
Charlie explains;

An opportunity came on to learn more about the business, I was interested in that and I took it

Fast forward a few years to 2006 and thanks to former Basingstoke Bison associate, Mark Barnard, he was made an offer he couldn’t resist.
Based in Norfolk, Virginia in the United States,  Charlie is now the Director of Group Sales, engaging with the fans, organising the entertainment and bringing in the fans or as Charlie puts it;

Thanks for the memories Charlie. 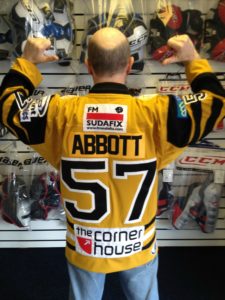 Next weekend, that’s 7th and 8th of April 2018, is the Elite League Playoff Finals Weekend in Nottingham.
Will you be there? If yes then come over and say hi, I’ll be wearing my gold Nottingham Panthers shirt with ABBOTT #57 on the back.
It’ll be really good to meet you, I’d love to know what you like, and what you don’t like about the show, you can also tell me who you’d like to hear on the show.

I really love contacting former players and recording their hockey memories, then editing and producing the Podcast to bring those memories to you.
Likewise and more importantly I know you love hearing them too.
We all love listening to those often hidden stories from inside the game, the stories that we, as fans, never get to hear.
It really gives me a buzz every time I upload a brand new Podcast, knowing that you’ll remember and reminisce about those memories from your hockey heroes of the past.

iTunes Reviews
Are you enjoying these Podcasts?
Therefore would you consider leaving a rating, preferably a 5 star rating and review on iTunes.
Reading your reviews gives me a great boost.
As a result, your reviews will help the Podcast get found by others.
All 5 Star reviews get a shout out on the Podcast.