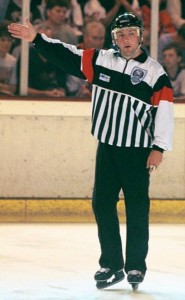 I talk with former BIHA and Ice Hockey UK referee Simon Kirkham.
As a sixteen year old in the very early 1980’s Simon found himself playing ice hockey for the Nottingham Panthers second string, the Trojans, before work commitments and a move away from Nottingham brought his fledgling career to a premature end.
However Simon’s Ice Hockey destiny was not to be denied and after moving back to Nottingham in 1987, his skating ability caught the eye of Referee in Chief, Nico Toemen, whose Dutch charm and persuasiveness talked him into “giving it a go”. This lead to an 18 year career as a linesman and then referee of international standard.
Simon recalls his very first hockey game:
“It was a junior game and I was waving my arms around like a windmill,
calling offsides and giving out 2 minute minor penalties
but not really having a clue what I was doing” 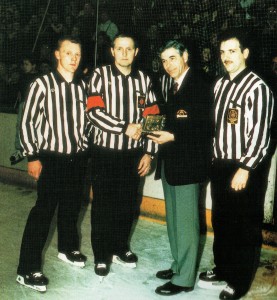 However with the constant encouragement and support of fellow officiating colleaguess like Nico Toemen and the late Micky Curry, things soon fell into place.
Six years later Simon was able to take the next step up by moving from linesman to refereeing domestic games. He later progressed to officiating at an international level.

We hear his opinions of what it takes to become an “on ice official”, his thoughts on ex hockey players that become referees and also tells of why some linesmen choose not to make the step up to become referees. 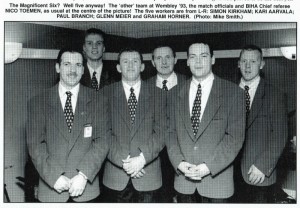 Simon also shares some amusing moments including an “on ice profanity” that was broadcast live on TV. He also tells how he had no choice but to referee all 3 games of the 1996 Wembley Playoff finals.

We conclude the interview as Simon explains his role as an Elite League supervisor. How he gives critique to the current crop of on ice officials and what that job actually entails.

Shoutouts
In this episode I give Shout Outs to the following guys that kindly left a 5 star iTunes rating and review:

The first Shout Out goes to Neil Thomas,
who wrote:
This had fast become a favourite podcast of mine, It’s been great hearing from a number of hockey icons and has brought back fond memories
from years gone by.
Great work Ken, I look forward to listening to further episodes as we go into 2015.

The next Shout Out goes to: “The Hobbitt”
Who wrote:
“Brilliant interview that brought back many happy memories”

and a Shout Out also goes to “Micky40”
Who wrote:
“Bring on the legend Simon Leach, he is a true legend to me and to others
– watch out Leachie is going to get you!”
Leave it with me Micky, I’ll see what I can do.

If you’re enjoying the Podcast I would really appreciate it if you would leave a rating, preferably a 5 star rating and a review on iTunes or Stitcher Radio, just like Neil, Hobby and Micky40 did.
Reading your reviews gives me a great boost, it’ll also help the Podcast get found by others.
You can read other reviews and even leave one yourself by following this iTunes link.

The sponsor of this episode is CrazyKennys Hockey Shop
Right Service, Right Prices, every time.