Today’s hockey hero from the past is former Murrayfield Racers, Fife Flyers and Dumfries Border Viking netminder Moray Hanson.
Moray is one of the few hockey Legends that have played and officiated at the highest levels of Ice Hockey.
He was Great Britain’s first choice netminder for the 1994 World Cup Pool A championships.
After becoming a referee, he officiated in 6 consecutive World Cup Championships, a feat no other Brit has ever achieved. 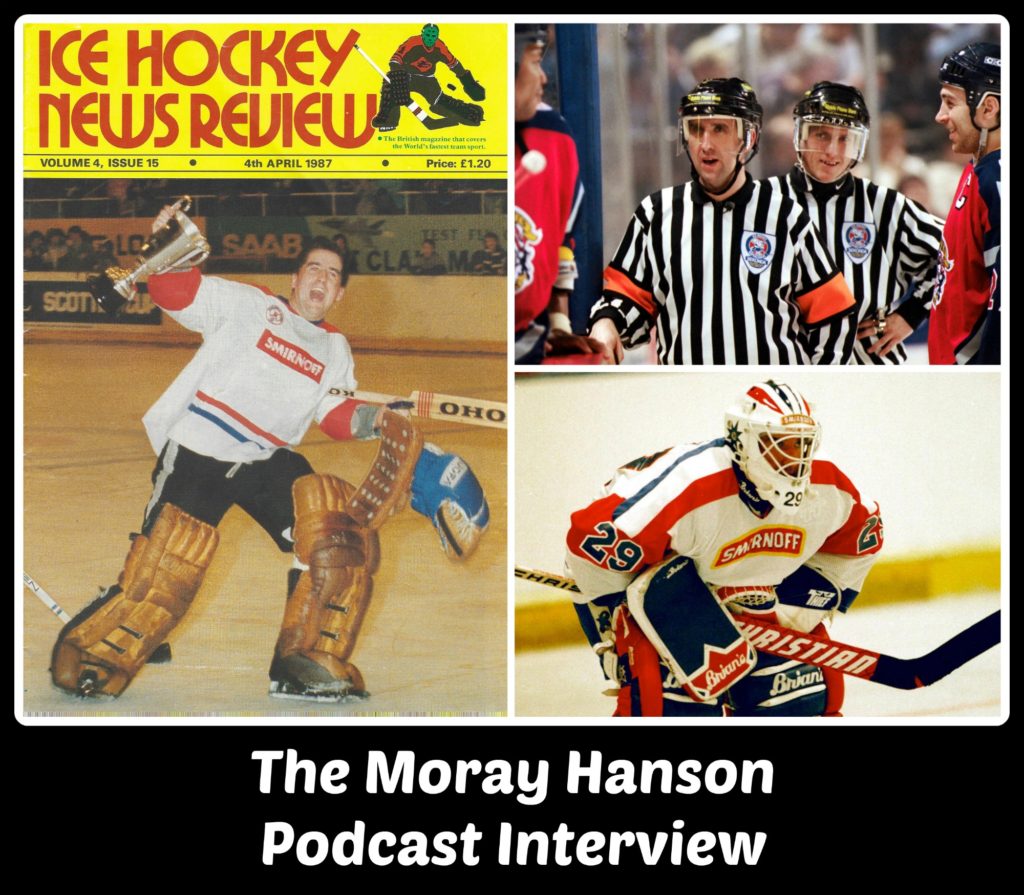 What do you do on a Sunday evening when there’s nothing on TV, Go to an ice hockey game of course.
This is exactly what Moray Hanson did. He loved it so much that he decided to learn to skate to enable him to take part in the sport.
However, his plans for becoming a top ice hockey player didn’t quite go according to plan!
He recalls;

They didn’t have any players equipment,
they only had goalie equipment,
so I thought I’d do that just for
a couple of weeks.

So an 11 year old Moray began his ice hockey career. He progressed through the U16’s Ravens, then the Raiders before finally making his Racers debut during the 1981 – 82 season. At the same time brothers Tony and Paul Hand also made their debuts.
All three players were to become part of the backbone of the Murrayfield Racers team for at least the next decade. 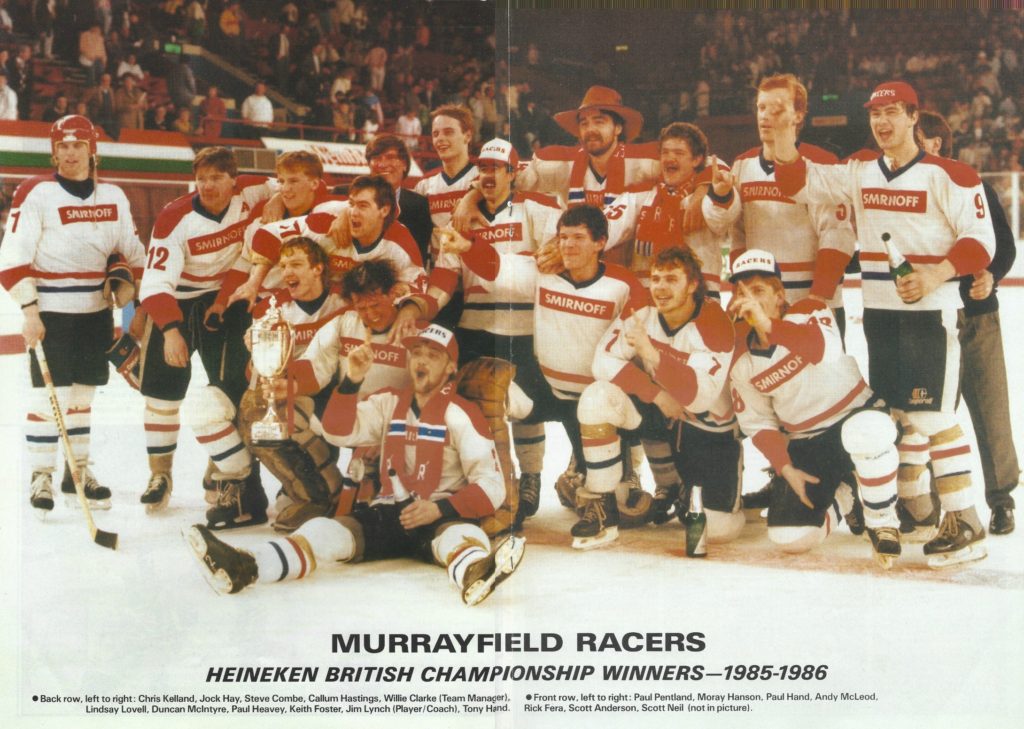 Under the initial guidance of coach Alex Dampier, Moray backstopped the Racers to League, Autumn Cup and Wembley Playoff Championship victories. They also finished as runners up numerous times in all three competitions. In fact Moray has probably made more Wembley final appearances than most other players.
The Racers team ended the season as runners up in the league and were Wembley Playoff finalists. However, they did claim one piece of silverware.

The team made the Benson and Hedges Cup Final and faced the Durham Wasps.
In a pretty one sided game, Moray conceded just 4 goals to help the Racers lift the cup. The final score being 10 – 4  to the Racers.
The Racers  were also runners up in the league However, it would be their last trophy for the next 4 years. 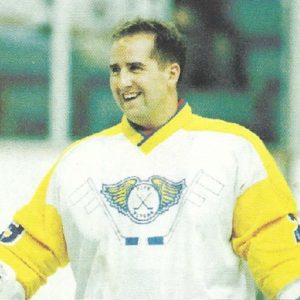 Moray shocked everyone when he signed for the Racers bitter rivals, the Fife Flyers, he explains;

I didn’t like the terms the Racers offered,
Fife coaches Jim Lynch and Milan Figala wanted me,
Fife manager Jackie Dryburgh offered good terms and I signed.
It was a real challenge though, like someone moving from Celtic to Rangers!

Coincidentally, Moray’s very first game, as a Flyer, was against his old Murrayfield team in a B&H Cup game in Fife. The Racers usually came away from Fife with a victory, not this time, as Moray posted a 13 – 10 victory. It was a good start for “Super Mo”.
The Flyers squad consisted of quality players like Moray, Milan Figala, Frank Morris, Gordon Latto, Dean Edmiston and Iain Robertson.
Unfortunately the team could only finish a disappointing eighth out of ten in the Premier Division.

In the summer of 1993 Moray was persuaded to return home when he re-signed for the Murrayfield Racers. The team had brought in head coach Rocky Saganiuk and Moray’s Fife team mates Frank Morris, Dean Edmiston and Scott Plews.
It was a smart move by Moray, the Racers won the Benson and Hedges Cup, beating the Cardiff Devils 6-2. Unfortunately that’s as good as it got as financial problems affected the team’s performances. A major dispute with the rink over finances didn’t help either. Regrettably this dispute proved to be irreconcilable.

The team eventually finished fourth in the league and so automatically qualified for the Playoffs. However on the eve of the competition the team was found guilty of breaching the wage cap restrictions. The team were docked five points and fined £5000.
With just two playoff home games left the financial dispute escalated and the Racers were locked out of the rink.
Consequently the Racers had to play their first Playoff game in Livingston, 15 miles from Edinburgh and the second in Fife. Their Fife “home” game was against Fife themselves and despite a valiant effort the team lost 5 – 6, as a result their season was over. 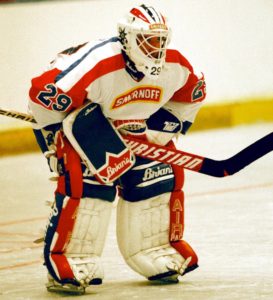 From the ashes of the Murrayfield Racers came the newly owned and newly named Edinburgh Racers. The club were saved at the last minute by sports promoter Alan Maxwell and long time fan Stewart Robertson.
Moray again linked up with Tony Hand, Paul Hand, Chris Palmer, Ivan Matulik, Mike Ware, Dean Edmiston, Paul Pentland and Scott Plews. On paper it looked like a team to be reckoned with.
However mixed results followed. A Benson & Hedges cup run ended abruptly in Nottingham. A live Sky TV broadcast saw the home side romp to a 19 – 2 first leg semi final victory.
Some pride was restored when the Racers won the return leg 9 – 6, but the damage had already been done.

After finishing a respectable 4th place in the league, the Racers once again met the Nottingham Panthers in the Wembley semi final.
Despite the Racers being out shot 45 – 18, Moray backstopped the team to an 11 – 7 semi final victory. Any lingering memories of that 19 – 2 Panthers B & H drubbing were well and truly buried.

Unfortunately the team faced a Sheffield Steelers team who’d lost heavily in the previous final and had a point to prove.
Moray recalls;

We were up against a bigger pool of players and a stronger team.
We’d also played in the later game
the previous night,
we were dead.

Despite a valiant effort, the Steelers proved to be far too strong and the Edinburgh team were defeated 7 – 2. 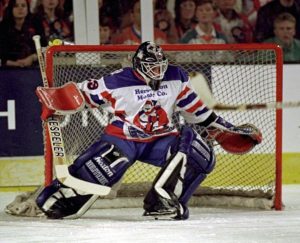 When the Edinburgh Racers folded in the summer Moray decided to drop down a league and signed for Dumfries. He was not the only former Edinburgh Racer, teammates Paul Pentland and Richie Lamb signed for the Border Vikings too. Fortunately the three agreed to share the driving, it was a 145 mile, 4 hour round trip to Dumfries and back!
After a mediocre season, Moray re-signed for the following season. However after just 7 games Moray decided to retire, personal problems at home and all the travelling had taken its toll. 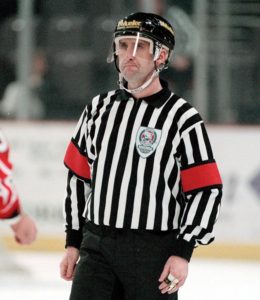 However, it wasn’t long after retirement that Moray resurfaced – as an on ice official, he recalls

I’d looked into refereeing, maybe three or four years before retiring,
and had spoken to the chief referee
Nico Toemen about it.

Within a couple of months of doing junior leagues he was on the line at an Ayr Scottish Eagles SuperLeague game.
From there it was up, up and up right to the very top. I asked Moray which was the easier league to ref in, the SuperLeague or the Elite League?
His reply;

Definitely the SuperLeague.
Most of those guys that had made it to the top
were very classy, educated and knew what
they were there for. They knew how
to conduct themselves.

During his refereeing career Moray went on to referee at the highest level. As a result he officiated at 6 consecutive World Championships.
However, Moray has the honour of being one of only 4 or 5 officials in the world to have played and refereed in Pool A. He is also the only ever British official to do so. 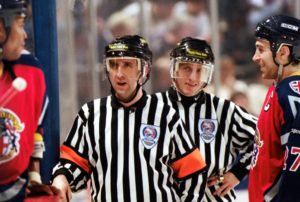 Similarly, as a top official in the Elite League, Moray refereed in 8 consecutive Playoff Cup Finals. The last, the 2012 Final, Moray announced his retirement just a day before the Playoff weekend began.
He recalls;

I hadn’t told anyone I was retiring until that weekend,
the send off I got from the teams and the whole arena
will live with me for a long time.

Moray was inducted into the British Hockey Hall of Fame in 2013.
Thanks for the memories Moray.

You can also listen to Podcast interviews from Moray’s Alumni of former team mates here: