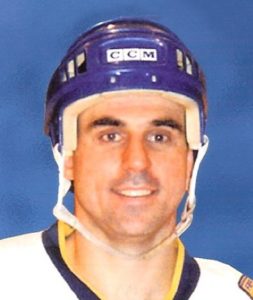 As a junior Frank had 5 very successful years with the Concordia Stingers college team in Montreal.
Along with his team, Frank was inducted into the Concordia University Sports Hall of Fame.

Although not chosen in the NHL draft, Frank was invited to the Winnipeg Jets training camp, he made the cut, they signed him up and assigned him to their AHL farm team in Moncton, New Brunswick, Canada.
However after a number of months in Moncton,  his frustration at the lack of regular shifts in games made him restless and when his agent mentioned an opportunity to play in Europe he jumped at it, within 24 hours he was on a plane heading for Scotland and Glen Henderson’s Ayr Bruins.

Unfortunately, from then on, all did not go according to plan as on arriving in the UK he was promptly deported for not having the correct work visa – he recalls:

Back then it was the “norm” to apply for a work visa after you’d arrived in the country and they’d end up getting it – but not me though!

My agent told me to say I was visiting a friend in Ayr, perhaps it was my open ended plane ticket or maybe the 4 dozen hockey sticks I had with me but UK immigration didn’t buy it!

So a very unhappy Frank Morris was given a police “escort” onto the next available flight back to Montreal.
Luckily, a month later, all the necessary paperwork was finally completed and he was able to get back on a plane and return to work, legally, in the UK.

Frank talks about his first impressions on seeing the Limekiln Road rink and the much smaller practice pad and how he was so unhappy that he had to be talked out of going straight back home to Canada.

Fortunately for the Ayr Bruins Frank chose to stay and give it a go.
After an initial settling in period, he spent the next 4 seasons playing for Ayr, icing with quality players like Danny Shea, Tommy Searle, Richard Laplante and player coach Rocky Saganiuk.

We go on to talk about the team reaching the 1989 Wembley weekend Play Off Final.
In the semi final they caused the upset of the weekend beating treble chasing Durham Wasps.
However the Nottingham Panthers were a different proposition and had a much stronger squad.
The Bruins eventually ran out of steam and the Panthers won the cup by a score of 6 – 3. 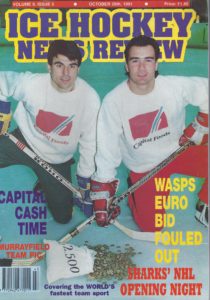 Frank with the legendary Tony Hand

After 4 years with Ayr, Frank spent the next 2 seasons in Fife.
The first season he helped the team return back to the Heineken Premier league via the Heineken promotion/relegation playoffs.
Ironically his new team pipped his old team Ayr to promotion.
Both teams finished joint top in the same playoff group.
However the Fife Flyers were promoted by a goal difference of just one goal.

The following season Frank moved on to link up with former Ayr coach Rocky Saganiuk and team mate Richard Laplante at the Murrayfield Racers.
Rocky built a strong team, with players of the calibre of Tony Hand,Paul Hand, Scott Plews, Mike Ware, Dean Edmiston Chris Palmer and Richard Laplante.
Success was soon to follow as they beat the Cardiff Devils in the Benson and Hedges Cup final.

Unfortunately by mid season the club had hit financial difficulties. Due to unpaid invoices the team was locked out of the Murrayfield ice rink.
What started out as a season offering so much promise and excitement had ended disastrously and shortly after the season had ended the team went into liquidation.

The 1993 – 94 season saw Frank drop down to the first division and moved south, over the border to play in Manchester with the Trafford Metros.
An unsuccessful season followed, Frank Morris was only to happy to make a return trip back to Scotland and Fife.

After a rather mediocre season, he chose to return to Scotland where he settled down to life in Fife, spending the next 8 seasons there, before retiring, he recalls:

There was a lot of highs during those 8 seasons, it was clearly the right move, I was lucky to really connect with the fans, Fife became my home.

Fife had chosen to opt out of the brand new SuperLeague, deciding instead to join the new British National League. The new BNL League consisted of other former Heineken Premier League teams such as the Basingstoke Bison, Cardiff Devils, Humberside Seahawks, Milton Keynes Kings, Murrayfield Racers and Peterborough Pirates.

Success in the NBL was to follow, with Frank as team Captain, leading the team to honours:

We had phenomenal success. We became a real force, we won Championships – one season we even won the BNL “Grand Slam”

Frank Morris decided to hang up his skates and retire in 2003.
A testimonial game to honour him was granted by the Fife Flyers, his number 47 jersey was also retired at the game, an honour shared with only 2 other players in the Flyers long history. 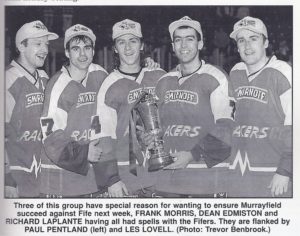 After retiring Frank started coaching the juniors in Fife before accepting a coaching job with the Braehead Clan.
He spent 4 seasons with the Renfrew based club before parting company with them in 2014.

These days Frank Morris, with his business partner, run their own hockey academy in Ontario.
With Junior teams, the Glengarry Highlanders and the O-Town Rebels, plus an U18 prep school federation team. It makes Frank a very, very busy man.

I give a shout out to “Andrew of Albion”  for his iTunes 5 Star rating and review.
I also give a shout out to Scott Antcliffe. If you’ve ever bought a Sheffield Steelers programme, chances are you’ve read one of Scott’s articles.
Keep up the good work Scott.

Are you enjoying these Podcasts?
Therefore would be able to leave a rating, preferably a 5 star rating and review on iTunes for me.
Reading your reviews gives me a great boost.
As a result of your review it’ll help the Podcast get found by others.
All 5 Star reviews get a shout out on the Podcast. iTunes link.