In today’s show I interview Sheffield Steelers legend Tommy “The Duke” Plommer. Tommy was an eight year veteran in the most successful period of the teams history.
Do you remember Ice Hockey in the early 90’s, when a team from Sheffield took British Hockey by storm?
It was a love hate relationship, Sheffield fans loved them, everyone else hated them! Well, that’s Old Time Hockey for you. 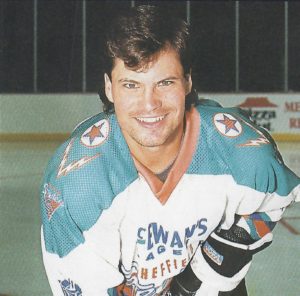 Canadian Tommy talks fondly of his time here in the UK. He first arrived as a sixteen year old playing a season with the Irvine Magnum Wings in 1985. He then returned home to Canada to continue his education but returned to Scotland six years later to play professional soccer for Ayr United.
However the lure of the rink proved too strong. The local team, the Ayr Raiders, had parted company with their dual national and Tommy was persuaded to switch sports. He signed for the Raiders in 1991, Tommy had already received his dual national status just a few months earlier. His parents having emigrated from Glasgow in 1968. 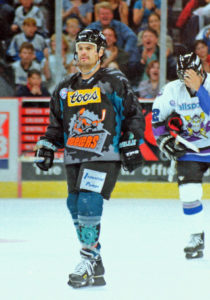 A year later the Ayr Raiders were teetering on the brink of going out of business. Tommy had made the decision to return to Canada and complete his education. However Sheffield Steelers Dave Simms had other plans for Tommy. Former Fife Flyers net minder Andy Donald, now in Sheffield, had recommended Tommy. “Simmsey” made a phone call and invited Tommy to join the Sheffield Steelers in South Yorkshire.

They were looking for a dual national, I’d already played in the Premier League
and wasn’t keen to drop down a division, eventually
I decided to try it just for a year
in all, I stayed eight!

Hockey night in Sheffield took off, crowds flocked to the brand new Arena and in no time all 8300 seats were sold out for virtually every game.
It didn’t take long for him to feel at home in Sheffield, he recalls; 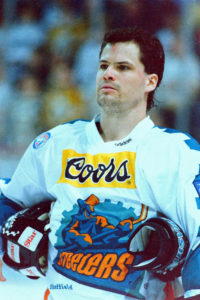 We talk of those early Steelers glory years, of the Championships and the Cup Final victories. Then we talk of “that game, that night”,  25th March 1995 to be exact, with the Sheffield Steelers in Nottingham. It was crunch time, win and the League title was theirs, lose and arch rivals, the Panthers would be Champions.

We also talk about the Steelers first Wembley Championship Finals appearance in 1994. After a euphoric semi final 8-0 “thumping” of fierce rivals the Panthers, they faced the Cardiff Devils in the final. Unfortunately key import D-Man Selmar Odelein pulled out minutes before the game with a back injury. Import forward Steve Nemeth was also injured and played on with a broken hand.
It did not end well and they themselves were “thumped” by a record Playoff Final score of 12 – 1, Tommy recalls,

With all that was going on,
literally minutes before Face off,
we probably lost the game mentally before it had even started.

Moving on and we talk how Mr Plommer became the “The Duke”, about rituals and superstitions and how he managed to stay with the same team for a total of 8 seasons, an amazing feat that is totally unheard of in North America.
We talk of why he eventually chose to leave the club, opting instead for a season with the Hull Thunder.

Later in this episode I give a shout out to our latest email Newslettter subscribers. Don’t forget that our subscribers receive a Free email Newsletter once a month with all the latest news on upcoming interviews plus. As a bonus, they also get access to extra Podcasts not available elsewhere, such as “The Sheep on the Durham Bus” with Frankie Killen and Rax the Destroyer with Marc Twaite.

Interviewing Tommy proved was a hockey reminiscing heaven with the completed interview consisting of almost two hours of great content.
However, according to the industry standard, a Podcast episode should be under 60 minutes. Fortunately this episode meets that target with just 34 seconds to spare – so what do I do with all the extra content – a question I put to my Newsletter Mailing List.
Their answer – produce an extended episode.