Today my guest is former Bracknell Bees and Sheffield Steelers Canadian D-Man Shayne McCosh.
In this episode Shayne reveals how;

Plus
He gives his opinion on former SuperLeague Chief Executive Ian Taylor, hint Shayne was not too impressed! 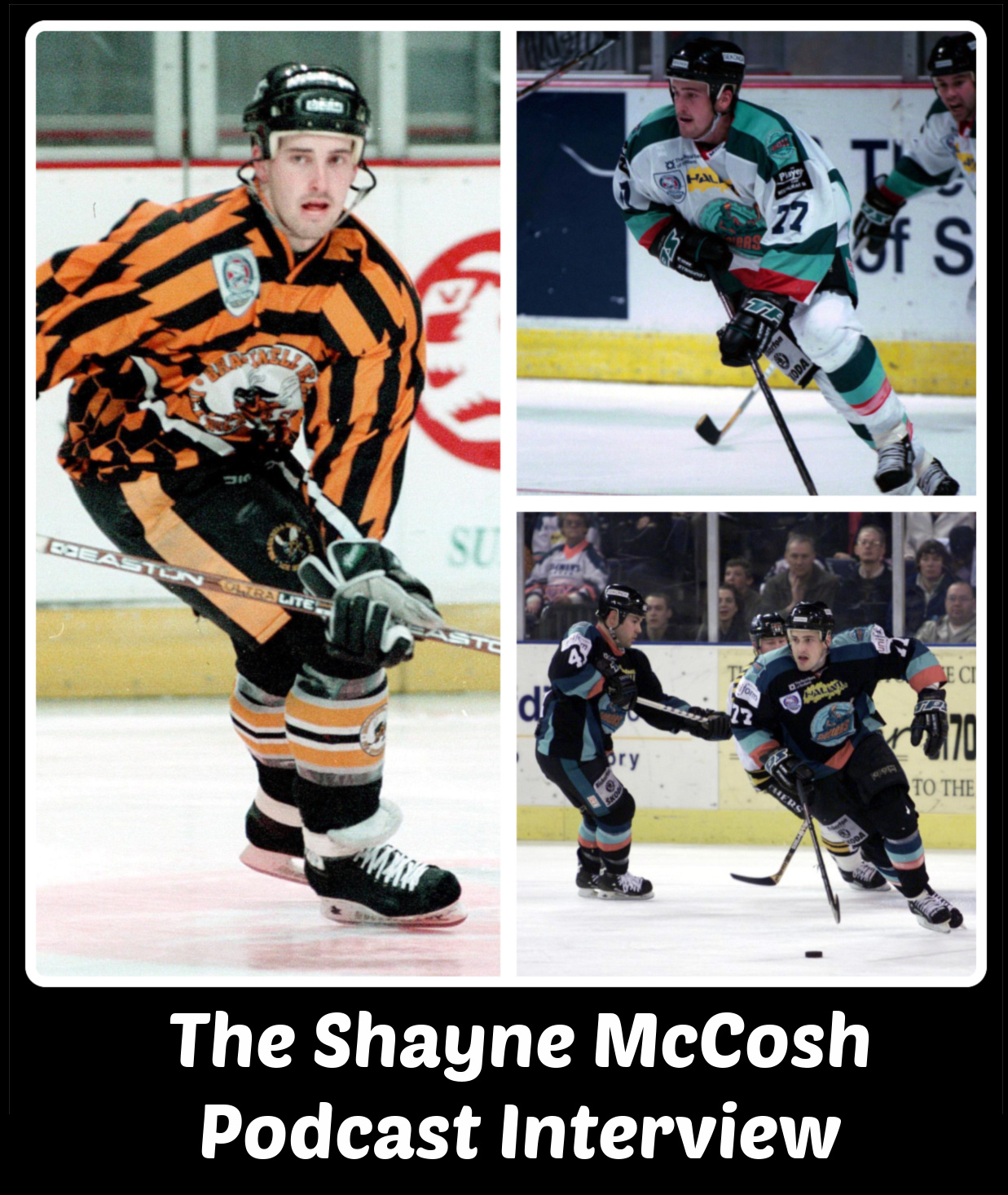 Shayne’s early years was that of a typical Canadian family orientated upbringing. Both his father and older brother were very good hockey players and his two sisters played ringette.
Despite his father working all hours at the local hydro plant he still found time to maintain their backyard ice rink. This paid long term dividends with their development, culminating with older brother Shawn making the NHL with L.A. and N.Y.R.

Shayne played his first pro game as a 19 year old for the AHL’s Springfield Falcons.
The following season he shared his time with the ECHL’s Erie Panthers and the AHL’s Providence Bruins.
By the end of that season, a rather disillusioned Shayne was all for calling it a day, until he received a call from England and everything changed, he explains:

That season I’d split my time between the ECHL and AHL,
I couldn’t settle, I debated if I should go back to school.
Then, right out of the blue
I got a call from Bracknell Bees head coach Jim Fuyarchuk
and everything changed.

Shayne joined the Bracknell Bees for the inaugural season of the new UK SuperLeague. He linked up with quality players, such as Dave Whistle, Dale Junkin, Chris Brant, Rob Stewart and Matt Cote.
He also found living in the UK was a bit of a culture shock too. Getting used to smaller apartments, smaller fridges and negotiating traffic roundabouts really took some getting used to!

In his three seasons in Bracknell the Bees found it difficult to compete with the bigger SuperLeague clubs. The team could only finish 6th, 4th and 4th.
The nearest to success they came was losing in the final of the Express Cup to the Ayr Scottish Eagles.

Time to move on
At the end of his 3rd season with the Berkshire club Shayne decided to move on. The Sheffield Steelers were very interested in signing him and so he made the decision to move to South Yorkshire.
Ironically, the following season the Bracknell Bees won the SuperLeague league championship, I asked Shayne if he regretted the move,
he recalls;

No, as much as I enjoyed my time in Bracknell
I just wanted to keep on
playing and I felt that Sheffield would be
a better place to continue my career,
they were on a bigger scale. 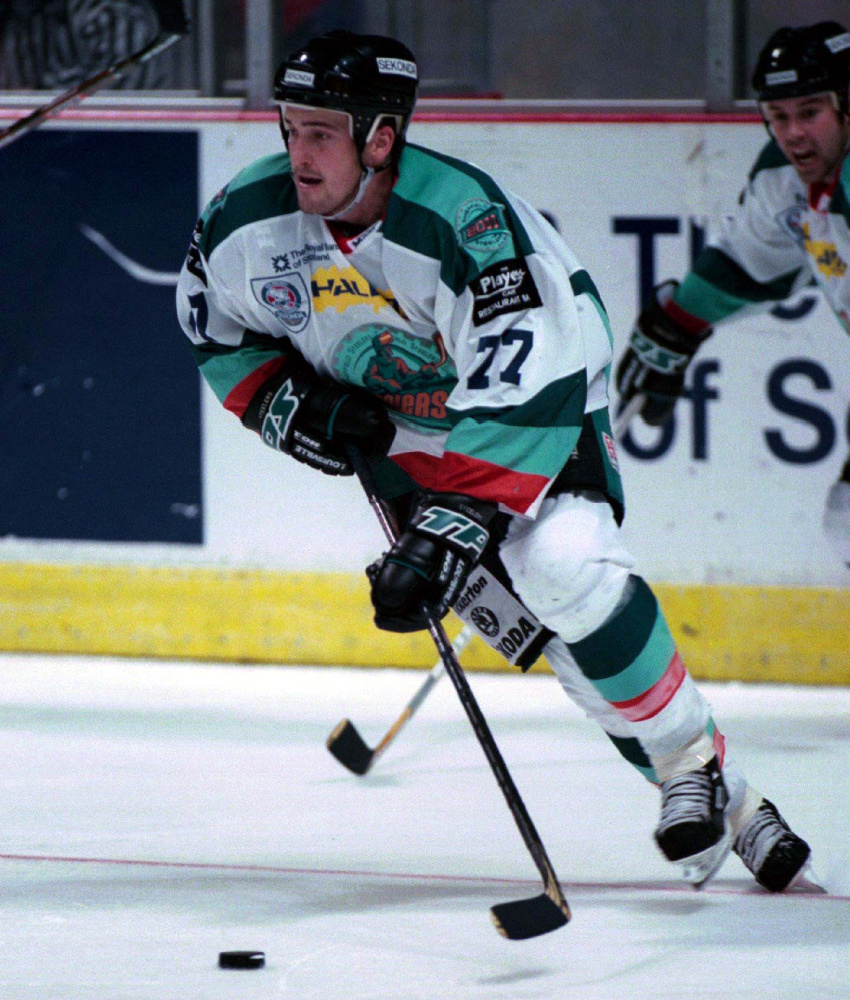 Shayne signed for the Steelers in the summer of 1999, together with his Bracknell team mate, goalscoring forward Dale Junkin. He also linked up with good friend and Steelers D-Man Kayle Short.
Highly respected Canadian coach Don Mckee was initially the team’s head coach. However the team failed to gel culminating with a 10 – 1 defeat at Bracknell in late October. Nicknamed the “Halloween night massacre”, it was to be the end of Don McKee’s reign as the Steelers head coach.

New Coach
His replacement was Mike Blaisdell, former coach of the team’s bitter rivals, the Nottingham Panthers. Coach Blaisdell had resigned from the Panthers a week before after clashing with owner Neil Black.
It was a good move as the Steelers finally started to live up to their potential. Top imports Teeder Wynne, Scott Allison and Greg Clancy hit top form while former NHL striker Ed Courtenay scored for fun.
By season’s end Shayne and his team mates had finished as league runners up and also won the Challenge Cup. The team also made the Playoff semi finals and B & H quarter finals too. 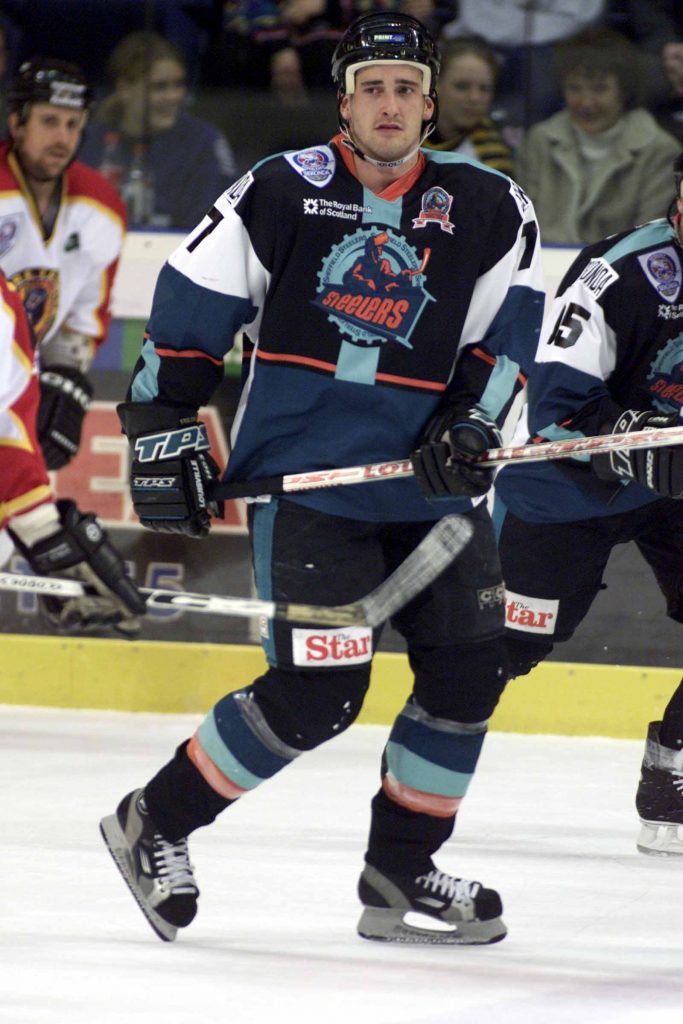 Mike Blaisdell had recruited well to create a very competitive team capable of achieving major honours. Out went Ed Courtenay, Dale Junkin and Teeder Wynne,  in came Rick Brebant, Warren Norris and Scott Metcalfe. Coach Blaisdell had swapped offensive flair for defensive toughness and it worked. Despite the teams financial woes they went on to clinch their first SuperLeague Grand Slam.
The Steelers cast all others aside to win the League Championship, Playoff Championship, B & H Cup and Challenge Cup.
The season was even more remarkable considering that Steelers team owner, Darren Brown, had been so “Scrooge like” in paying the teams wages. Player payments were consistently late as Brown juggled the finances of his UK Sports Group. The group consisted of Chesterfield Football Club, Sheffield Sharks Basketball Club and Hull Thunder of the BNL.
At the start of the season Shayne had agreed to become player rep, he certainly had his work cut out for him.

No pay, no play

Shayne, as player rep, had to liaise with both players and management, not an easy task at the best of times.
By January 2001 the players were chasing back payments from November and they were now in full revolt mode. A petition, signed by all of the players, was sent to the owner simply stating “no play no pay”.
Fortunately promises were made and money found to keep the players playing, at least for the short term.

The vote
However, things came to a head in March 2001, wage payments had slowed to a trickle and the players were extremely upset.
The team were in Belfast for a playoff game against the Giants, quickly followed by the Challenge Cup Final two days later.
Before the Belfast game the team chose to protest with a “no pay, no play” vote.
The players were split, those that wanted to play on and those that wanted to go home.
Fortuitously the vote ended in a tie, a deal with management was hammered out and the game played, albeit a half hour later than scheduled.
Two days later the team beat the Ayr Scottish Eagles  4 – 2 at the Odyssey Arena to lift the Challenge Cup.

The Steelers went on to defeat the London Knights 2 – 1 in the Playoff final to complete the Grand Slam. 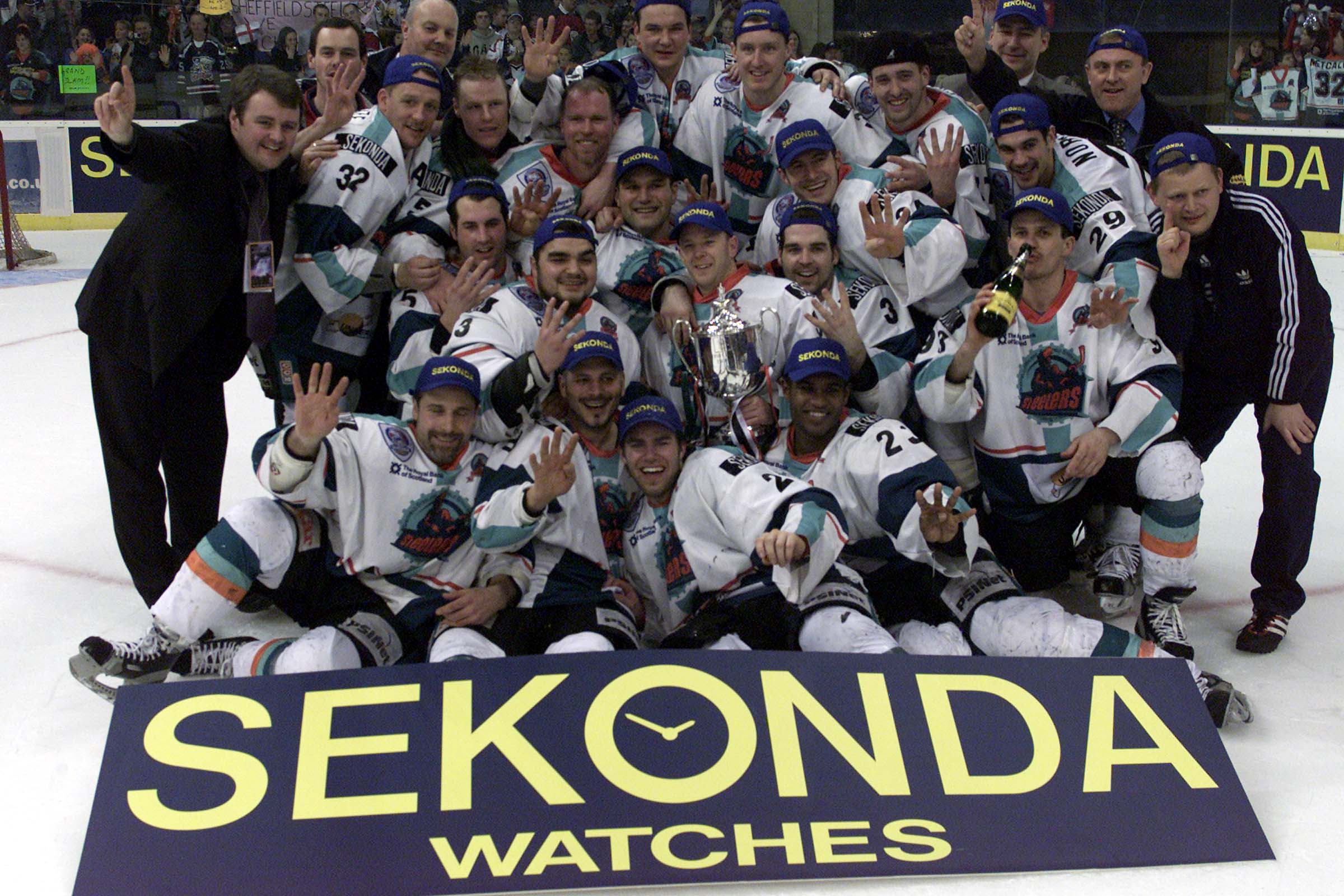 Footnote:
Team owner Darren Brown had no choice but to give up the Sheffield Steelers franchise in mid March. Two local businessmen, Andy Cooke and Martin Jenkinson, helped the club complete their season. Had it not been for their financial  support the team would not have completed the Grand Slam.
Strangely their bid to buy the Steelers franchise was rejected by the SuperLeague. The franchise went to former Chesterfield FC owner Norton Lea, the man that sold the football club to Darren Brown.
You can listen to what David Simms thought of Norton Lea in episode S5E02 here.

You can also listen to Podcast interviews from Shayne’s alumni of former Bracknell Bees and Sheffield Steelers players here: