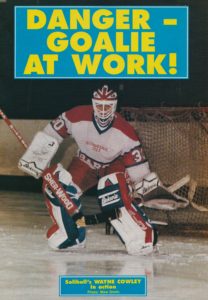 After a successful junior hockey career he signed for the Calgary Flames during their most successful NHL period.
The Flames made him their 3rd choice netminder, although unfortunately, he never got a chance to play an NHL  game.

After 5 years with the Calgary Flames, he chose to reject a new Calgary Flames contract offer and decided to become a free agent.
Although he then received plenty of offers from minor league teams, Wayne decided to “hold out” to consider his options.
He was really surprised to receive an offer from an ice hockey team in the UK, the Solihull Barons.
With his parents originally from London, UK, the appeal was very strong, it seemed to be the ideal place to go, he explains;

Out of the blue I receive an offer from David Simms, my agents accept it and I’m off to the UK.
So, one minute I’m dressing for a Stanley Cup game, the next I’m in Solihull!

A culture shock was to follow as, having arrived at Hobbs Moat Road and thinking it was the Barons practice rink, he was told,

No, this is actually our real rink!

The year was 1991, the Barons were a Heineken Premier League team with big ambitions.
Unfortunately the club’s finances didn’t match those ambitions and when their main sponsor pulled out, players weren’t being paid and Wayne was left with no choice but to leave the club – he’d played just 8 Autumn Cup games.

Back to North America

After 2 games “helping out” the Blackburn Blackhawks, Wayne returned to North America with the ECHL’s Raleigh Icecaps and the AHL’s  Cape Breton Oilers, who were the Edmonton Oilers farm team. 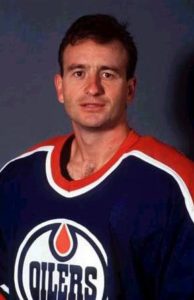 Wayne spent the next 2 seasons with the Cape Breton Oilers and finally, during the 1993 – 94 season, earned a call up by Edmonton and made his NHL debut.
The game, away to the New Jersey Devils, ended in a 3 – 2  defeat for the Oilers.
By all reports Wayne did very well, however it was to be his one and only NHL game.

Return to the UK

In the summer of 1995, after recovering from major knee surgery, Wayne got the chance to return to the UK when former Solihull Barons GM Dave Simms persuaded him to sign for the Sheffield Steelers. 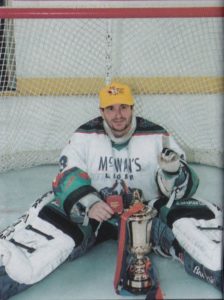 He made his debut in front of a 9000 seat sell out Sheffield Arena crowd, in a Norwich Union Cup semi final.
The game was the 2nd leg against the Fife Flyers – it was also televised live on TV – no pressure!
Steelers won in overtime, as a result they booked their place in a Cup Final showdown with rivals, Nottingham Panthers.
It was a guaranteed sell out 9000 seat crowd in front of their own fans at the Sheffield Arena.
The Steelers took the game at a canter, winning it 5 – 2.
Later that season the team retained the League Championship they had won the previous year – next up was the Play offs and Wembley.

After cruising through their Play off group, the Steelers travelled to Wembley knowing that the “Grand Slam” was on.
The Steelers sailed through their semi final, beating the Humberside Hawks 6 – 3 to reach the final.

Once again they faced their old enemy, the Nottingham Panthers in the final.
In an amazing Championship game, the Steelers went 3 – 0 up, the Panthers pulled back to 3 – 3.
With no score in overtime the Steelers finally won the game 2 – 1 in a penalty shoot out,
Remarkably Wayne played through the whole game with a broken finger, sustained in a collision with team mate Andre Malo during the warm up!

The Steelers Grand Slam team was packed with quality players, including Tony Hand, Nicky Chinn, Ken Priestlay, Ron Shudra, Scott Neil, Les Millie, Tommy Plommer and Steve Nemeth.
You can check out their full 1995 – 96 Grand Slam roster here
It was the end of British hockey’s golden era, the new unlimited import SuperLeague era was about to begin.
The SuperLeague relocated the Play off finals weekend to Manchester and hockey in the UK was about to change and not for the better! 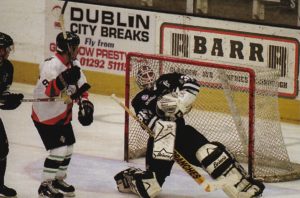 Despite signing a new Steelers contract that summer, Wayne moved to Germany before returning to the UK the following season.
Wayne Cowley was to spend two seasons in the North East with the Newcastle Cobras and Newcastle Riverkings.
Unfortunately due to lack of finance which bred a lack of success – Newcastle finishing bottom and second bottom of the standings.

Finally we moved on to talk about Wayne’s superstitions and rituals,

I had superstitions a plenty, to this day I still carry a lucky rubber duck in my kit bag. 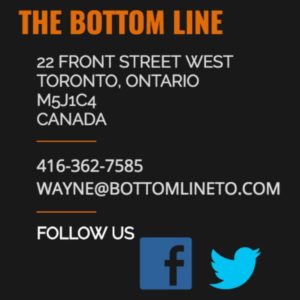 These days, Wayne is the proud owner of the Bottomline Bar.
The Bottom Line can be found at 22 Front Street West, Toronto, Ontario – just a wrist shot away from the Air Canada Centre  home of the world famous Toronto Maple Leafs.
Wayne would love to see you – so if you’re ever in downtown Toronto, pop in and mention this Podcast and I’m sure the first round will be on him!

Today’s Shout out goes to Stewart Roberts, editor of the Ice Hockey Annual .
After 40 years of producing the Annual Stewart has decided to call it a day and retire.
The annual has and always will be a prime source for researching facts and dates for use in these interviews – it really is an invaluable resource.
Most of all, thank you Stewart for all of those years of dedication and hard work.
Enjoy your retirement.