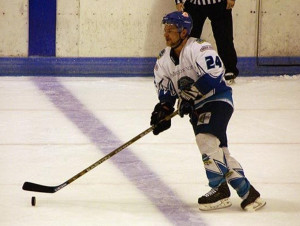 Scott made his debut for the Flyers at the tender age of  fourteen. Due to his age, he spent the next three years playing not only for the Kirkcaldy club’s first team,  but also the second team, the Kestrels and both the Under 16 and Under 19 teams. Such was his talent that he also played for the Great Britain Under 18 team.

Scott would probably have been forgiven for thinking his hockey prospects were “pretty good” but a bust up with Flyers coach Jim Lynch together with an injury just a few weeks into the 1993 – 94 season saw him released from the Flyers after seven games.

However Fife’s loss was to be the Murrayfield Racers gain as Scott was quickly snapped up by the Edinburgh club, playing 27 games that season and another 40 the following season in a Racers team that included the likes of Tony Hand, Moray Hanson, Paul Hand, Frank Morris, Chris Palmer and Mike Ware.

After two years it was time for a change and Scott made the decision to follow ex Flyers and Racers forward Dean Edmiston over the English border to Telford in the West Midlands.

After just ten games playing for the Telford Tigers, and despite having really enjoyed himself in the Midlands, he chose to return north to rejoin the Flyers – a decision he regrets to this day. 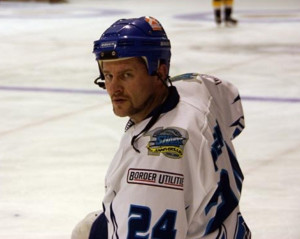 We also speak of his time at the Paisley Pirates “the most enjoyable time of my life, they were hockey people who really looked after us all, they even paid to fix my teeth” he says.

Finally I ask Scott about the 100 years UK Ice hockey event that is taking place on the Friday 31st July, Saturday August 1st and Sunday 2nd August of which Scott is a co – organiser along with Frankie Killen, you can check out Frankie’s episode 012 interview here

I also give a shout out to “JonoB 1972” for his iTunes 5 star rating, he wrote:
“An excellent Podcast with some real blasts from the pasts – well worth listening too”

If you’re enjoying the Podcasts I would really appreciate it if you would leave a rating, preferably a 5 star rating and a review on iTunes or Stitcher Radio, just like Jono did.
Reading your reviews gives me a great boost, it’ll also help the Podcast get found by others.
You can read other reviews and even leave one yourself by following this iTunes link.