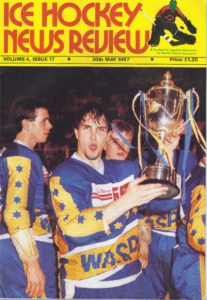 Durham Wasps signed the French Canadian as a replacement import in February 1987.
Together with fellow imports, forward Kevin Conway and d-man Mike O’Connor they formed a formidable on ice partnership.
The team had the advantage of quality Brits such as Paul Smith, Frankie Killen and both the Johnson and Stephen Cooper and Ian Cooper.
We talk of the 1987 Wembley Championship Finals weekend, his hat trick in the 7 – 5 semi final win over the Fife Flyers
and then of the a 9 – 5 victory, in the championship final against the Murrayfield Racers.
The following season, after just 19 games, fans favourite Mario, decided to quit the Wasps and return home to Canada.
This decision earned him a 5 year ban from the British game.

After the ban had expired Mario returned to the UK, linking up with former team mate, Kevin Conway at Basingstoke.
It was a good decision as coach Peter Woods team went on to top the division and achieve promotion.
The team surprised many people, finished nine points clear of title favourites Sheffield Steelers, to win the Heineken division one.
They also won the division one playoff championship final and promotion to the Heineken Premier division through the playoff/relegation playoffs. 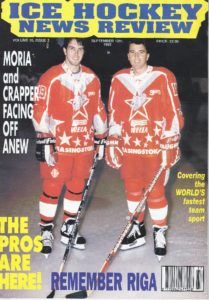 Together again Mario and Kevin Conway

Fast forward 12 months and after a disappointing season with Basingstoke in the Premier division, Mario decided to return to Canada, hang up his skates and retire.

It was December 1994 and the Nottingham Panthers head coach, Mike Blaisdell, persuaded Mario to return to the UK and sign as a replacement for the departed Darren Schwartz.

Although the Panthers promised much, having led the league for most of the season, injuries and loss of form took it’s toll and again the League Championship eluded them.

Once again Mario was very tempted to hang up his skates but decided on one more season, this time with division one team, the Telford Tigers.
The team had invested heavily in bringing in top import players Claude Dumas, Rob Wilson, Rick Fera.
They also added quality British players Dean Edmiston, Mark Pallister, Scot Plews, Simon Leach and Paddy O’Connor to the team.
The team were hot favourites to win promotion to the Premier division and Tiger fans were starting to get excited.
Mario gelled well with Claude Dumas and both were scoring for fun. However it simply wasn’t to be.
By mid October coach Gary Douville had been sacked, a month later Dean Edmiston and Simon Leach had departed to Newcastle, Scott Plews to Fife and Rob Wilson returned to his old club, the Sheffield Steelers. 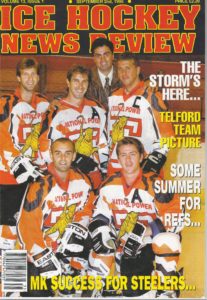 The team that promised so much but delivered so little

Rick Fera finally arrived in Mid December, made his debut and after just three weeks decided to move on.
Poor form continued dogged them, by the end of January they had won just one game in the last ten.
The Tigers decided they had to make changes and released both Mario and D-Man Mark Pallister.

These days Mario, whose “day job” is now as a Police officer, recalls his UK adventures fondly.
His time with Durham and especially that Wembley Playoff Championship victory are memories that will live with him forever.
He still retains his humour as when asked what he now does to stay fit replied “chasing criminals”

Thanks for the memories Mario and thanks too for all of those goals.

Goes to Nottingham Panthers fan Chris Tate.Chris kindly donated his ice hockey magazine and programme collection to my expanding library.
This library is invaluable for researching the careers of guys I interview.
Thanks again Chris.

You can also listen to Podcast interviews from Mario’s alumni of former team mates: