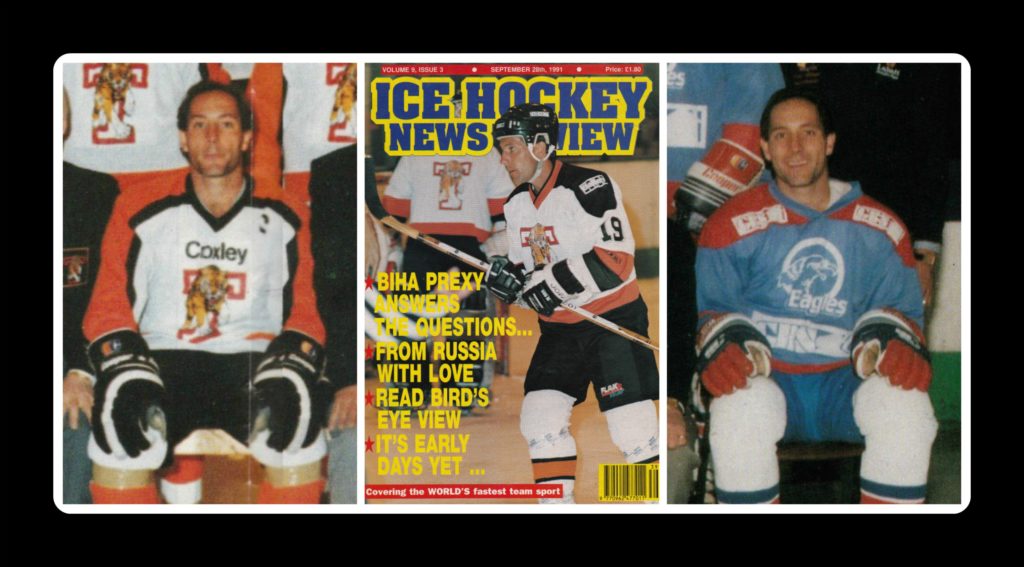 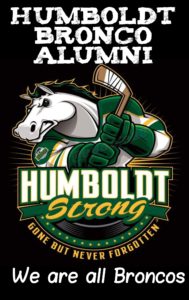 As a teenager, Canadian Mark had three seasons with Saskatchewan junior team the Humboldt Broncos.
Many of you will be aware of the terrible tragedy that occurred on the 6th April of this year.
The Broncos team bus was involved in a collision that ended in many fatalities. I ask Mark of his thoughts and feelings when the news came in of the tragedy.
To show his support for the Broncos Mark, along with many others, will be travelling back Humboldt in Saskatchewan to take part in an Alumni game planned for early next year – that’s 2019.
Incidentally the (now closed) fundraising Gofundme page, with donations from all over the world, raised a staggering total of $15.7 million dollars.
Now that shows the power of the Hockey Family, simply incredible.
You can view updates on the Broncos right here:
Humboldt Broncos Info

Moving on and after finishing college in 1983 Mark was considering taking his hockey skills to Australia. However on the advice of good friend Barry Skrudland, he decided to give the UK a try.
Barry suggested that he link up with him and fellow import Chuck Taylor at the Solihull Barons.
The Barons were headed up by TV personality Gary Newbon who actively promoted the club, bringing in valuable sponsorship. This allowed the Canadian imports to concentrate on their on ice matters.
In the days of three import hockey it was very important to improve the standard of the local British hockey talent, to bring through the juniors and to help introduce more professionalism to the sport.

In the early days of his time in Solihull he was billeted out with an English family. Mark talks fondly of his introduction into the English way of life and it’s culture with the Lewis family. 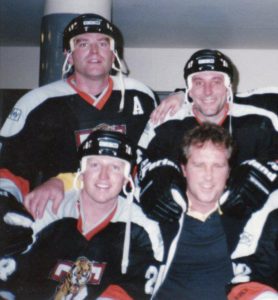 In 1985 Chuck Taylor decided to leave the Solihull Barons, moving just 47 miles to West Midlands rivals Telford. Mark had no hesitation when the offer came in to join him, as he explains;

It was a no brainer, an exciting time, in a brand new facility
and a chance to be part of a new start

Chuck Taylor had big plans for his new Telford Tigers and Mark was eager to be a part of those plans.
During his 2 seasons with Telford he saw the club build a battling rivalry with former club Solihull Barons, play to packed houses and hold their own in the British Heineken division 1.
We also talk of Chuck’s continuing battles with the ruling British Ice Hockey Association (BIHA) as Mark explains;

Maybe in hindsight he could have toned it down a bit but Chuck always had the best interests of the game at heart.

At the end of the 1987 season, Mark took time out to fore fill an ambition to become a Golf Professional. Golf has always played a big part in his life, so when the chance came along he grabbed it with both hands. 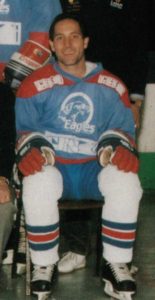 For the next few seasons Mark spent his days as a Golf Pro and his nights as a Hockey Player. He split his time with the Deeside Dragons, the Birmingham Eagles and the Lee Valley Lions.
Mark proudly explains;

I believe I’m the only player to turn Pro in both sports at the same time.

Romford coach, Gord Jeffrey, an old friend from Saskatchewan, persuaded Mark to join his Raiders team.
Mark had been re-classified to non import status and was considered an important asset.
It was a good season, with Mark posting 51 goals and 41 assists.
However a 300 mile round trip took it’s toll and the following year saw Mark split the season with a return to Telford and then back again to Romford.

Another year, another challenge, in fact Mark spent the next 3 years as a Golf Pro in the Bad Gleichenberg region of Austria before returning to the UK for the 1998 – 99 season, splitting his time with Paul Thompson’s Solihull Blaze and then the Oxford Blades before finally hanging up his skates for good at the end of that season.
These days Mark is in account management in the print industry.

You can also listen to Podcast interviews from Mark’s alumni of former Telford Tigers and Nottingham Panthers players:

So, once again a very BIG thank you to Tony and Tommy and also to my other Patron’s, to Jeff Povey, Oscar Brownsword,
Colin Dunn and Chris Saddington for their continued support.
It really is very much appreciated