In Part 2 of the Tony Hand interview we move on to talk of Tony’s time at the Sheffield Steelers and Ayr Scottish Eagles. Then his role as player – coach of the Dundee Stars, Edinburgh Capitals, Belfast Giants and finally the Manchester Phoenix. 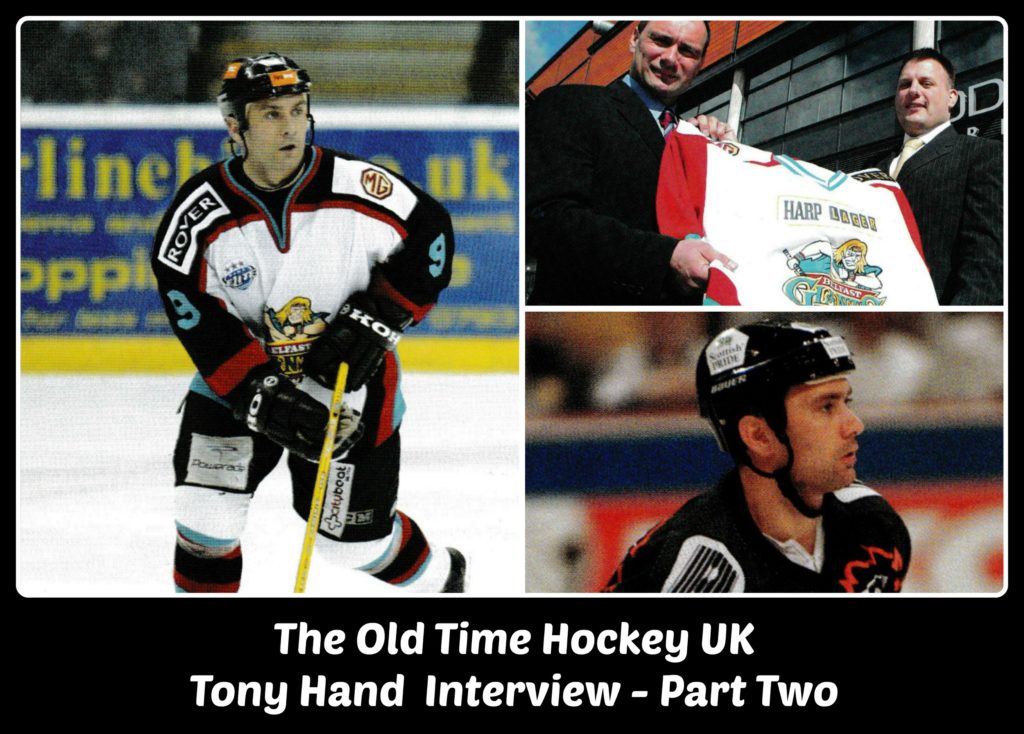 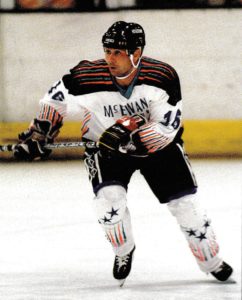 During the summer of 1995 the Edinburgh Racers folded. Tony moved his family moved to England and to South Yorkshire where he signed for the Sheffield Steelers.
The previous season the Steelers had won the League and Playoff Championship “double” and were determined to go one better.
Tony joined a team full of top calibre players including new signings Nicky Chinn, Wayne Cowley and Andre Malo to add to the likes of Ken Priestlay, Ron Shudra, Scott Neil, Tommy Plommer and Les Millie.
It was a very good decision, the Steelers took on all comers and went on to win the Grand Slam.
Alex Dampier’s Sheffield Steelers won the League Championship, Benson & Hedges Cup and the Wembley Playoffs in a breathtaking season. 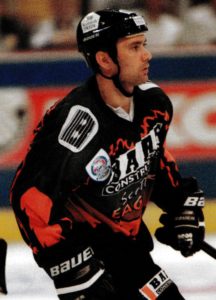 After four years with the Steelers, Tony decided it was time to return to Scotland. So when, in the summer of 1999, his former Murrayfield Racers coach, Jim Lynch asked him to join his Ayr Scottish Eagles SuperLeague team, he didn’t hesitate.
It was so much closer to his beloved Edinburgh home. It also meant that his wife and children could be nearer to their family.
Although Tony enjoyed his two years in Ayr, playing 86 times, scoring 27 goals and 71 assists for 98 points, the team finished a mediocre fifth place in both seasons. 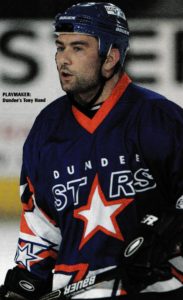 After his time in Ayr, Tony was approached by Michael Ward, who together with his brother, Stephen Ward, wanted Tony to become player coach of their new Dundee Stars team.
Both the Sheffield Steelers and the Coventry Blaze had tempted him with very good offers.
Tony viewed Dundee as an opportunity to take his career to the next stage and became the Stars first coach.
It was a good move, the rookie player coach filled his fledgling team with some excellent players
Despite stiff competition from established teams such as Coventry, Fife and Guildford the Stars romped the league by 12 points
clear of second placed Coventry Blaze, and then went on to complete the double by beating the Coventry Blaze 8-7 in a two legged Playoff Final.

After a disappointing second season with Dundee, Tony took the opportunity to return home to Edinburgh. That season he coached his Capitals team to third place in the BNL, their highest ever League position. The Edinburgh Capitals also won the Scottish Capitol Cup, ironically beating his former Dundee Stars team.

Late in 2003 Tony received a letter from Her Majesty the Queen. The letter informed him that he was to be included in the “New Years Honours list”.
Tony admits that, at first, he thought it to be someone’s idea of a joke or wind up, he soon learned that he really was to be awarded an MBE or “Member of the British Empire”, for outstanding services to British Ice Hockey.
It was a very, very proud moment in his career. 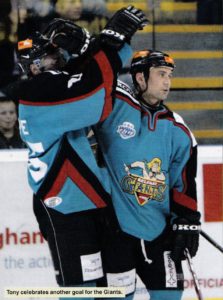 Another season, another team, despite financial restrictions the Belfast Giants wanted Tony as their new player – coach.
It was an opportunity to test his coaching skills in the UK’s top tier Elite League.
It was a good choice for both team and coach as Tony put together a Giants team capable of mounting a strong championship challenge. That challenge only faded during the last few weeks of the season, with the Giants finishing as runners up to the eventual Grand Slam winners, the Coventry Blaze.

However a season of constant travel and being away from his Edinburgh based wife and young family took it’s toll.
In the summer of 2005 Tony decided not to renew his Giants contract. Instead he returned to Edinburgh for a second term coaching the Capitals. 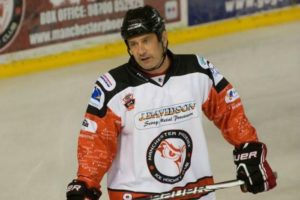 The following summer, 2006, Tony accepted an offer to move south and became the player-coach of the reborn Manchester Phoenix.
Team owner, Neil Morris, had mothballed his Phoenix team for a couple of seasons.
The newly constructed Altrincham ice rink was now ready and was just 8 miles from Manchester city centre. It was time for the Phoenix to fly.
It was an association that was to last almost eleven years. During that time Tony lead the team to an EPL League Championship in 2011 and 2014, League and Playoff runners up in 2012,  Playoff Champions in 2013 and Playoff runners up in 2014.
Sadly the Manchester Phoenix folded in late January 2017.

In the Spring of this year (2018) it was announced that Tony’s first club, the Murrayfield Racers had reformed.
It was absolutely no surprise to find that Tony has been instrumental in the team’s resurrection.
The “New Racers” will play in the Scottish National League (SNL) from the start of the 2018 – 19 season. The team will also compete in the National Ice Hockey League (NIHL) North Cup, competing against the Solway Sharks, Billingham Stars, Blackburn Hawks, Hull Pirates, Sheffield Steeldogs and Telford Tigers.

However the club’s ultimate aim is to gain a place in the Elite League and once again become a major force amongst the top teams in the UK.

Today’s Shout out goes to new Patreon Patron Michael Cook.
Michael is a Whitley Warriors and Sheffield Steeldogs fan and says he’d love to hear Andre Payette on the show
– leave it with me Michael I’ll add him to my “Hit list”

So, a very BIG thank you to Michael and also to my other Patreon Patron’s, to Tommy Boll, Oscar Brownsword, Colin Dunn,  Tony Harrison, Jim Murden, Jeff Povey and Chris Saddington for their continued support.
It really is very much appreciated.