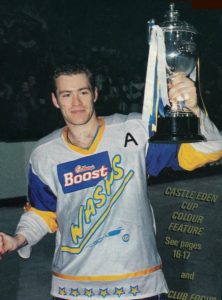 A product of the Durham Wasps renowned junior system and together with his brother Ian, the “Cooper Brothers” were as good, If not better than most of the imports of that time.
Even today Stephen is rated by many as the “best British defenceman ever”

Stephen made his debut in the 1980-81 season, playing five games. A season later he’d confirmed his talent by winning the league’s rookie of the year. That same season he was also chosen to play for the Great Britain U18 team.
Together with his younger brother Ian he played a huge part in the Durham Wasps “glory years”.
In just 4 years the team won the League and Wembley Playoff Championship twice and Norwich Union Cup twice.

In the summer of 1988, UK Ice Hockey was rocked when the Cooper brothers signed for the Cardiff Devils.
Cardiff supremo John Lawless, persuaded them both to drop down to League One to become part of his Devils team.
It was a gamble that paid off handsomely, the team gained promotion to the Premier League in their first season.
Long standing Cardiff fans will never, ever forget what happened next. Usually a promoted team really struggles in their inaugural Premier League season, many were even relegated.
Cardiff took the Premier league by storm, first winning the League Championship and then the Wembley Playoff Final. 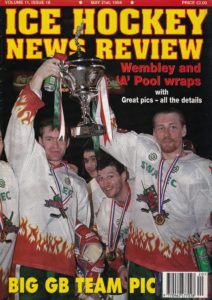 Once again Stephen and Ian shocked the hockey world, in the summer of 1990 they returned home to Durham.
Success, once again, was to follow.
First came the Norwich Union Cup, then the League Championship and then the Wembley Playoff Championship.
Oh and somewhere in between they also won the Castle Eden Cup.
The Durham Wasps, together with the Cooper brothers, had won UK Ice Hockey’s Grand Slam.
Some may forgive a team for suffering a hockey hangover the next season, not in Durham!
The “Big Blue Machine” retained both the League and Playoff Championship.
However, once again, Stephen and Ian choose to shock the hockey world once again!

John Lawless had never given up on enticing the Cooper brothers back to Cardiff. In the summer of 1992 he succeeded.
Back came the boys and back came success for the Devils – in the shape of a 1992 – 93 Grand Slam!
It was a golden few years for the Devils, the following season the team retained the League and Wembley Playoff Championship and finished runners up in the Benson and Hedges Cup. 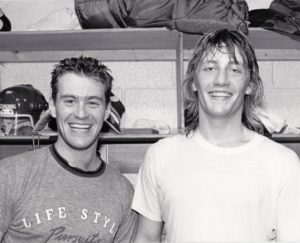 However it’s the fans in both Durham and Cardiff that will remember “The Cooper Brothers” massive contribution to their teams glory years.
Stephen’s trophy cabinet is full of League Championship, Benson & Hedges Cup and Playoff Championship medals and together with brother Ian is amongst an Elite group of players who can boast of being a part of not one but two different Grand Slam winning teams.

“Your Podcast gets me through the day at work, I’ve been a Panthers fan since ’88 and I still go today”.

Second shout out today goes to TBWA from New Zealand.

He or she wrote:

Great Stuff, Love this.
“Back in the day when Streatham were great and I learned to love watching the game.”

Thanks for your review TBWA, it’s very much appreciated.

Last but most definitely not least, my final shout out goes to my Patreon Patrons:

Thanks for your continued support guys