In the second episode of series 4, I talk with former Nottingham Panthers legend and goal scoring forward Greg Hadden.
Greg played 7 seasons with the Panthers, icing a total of 377 games and scoring 167 goals along the way. 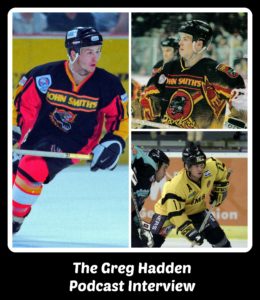 Before delving into Greg’s career we talk about his recent hockey related shoulder operation. Fortunately it went well, his surgeon predicting that, with rehab, he should have full recovery in 3 or 4 months.

Raised in Vancouver, Greg Hadden followed his elder brother into ice hockey after developing his skills playing street hockey.
Greg then spent 3 seasons in junior hockey with the New Westminster Royals. There he formed a life long friendship with another former Nottingham Panthers legend, D-Man Steve Carpenter.
In fact it was Greg’s influence and recommendation that, as a result, persuaded Panthers coach Mike Blaisdell to bring Steve to Nottingham.
You can listen here to the Steve Carpenter interview
He iced with Steve at North Michigan University and with the ECHL’s Richmond Renegades.
So, both Greg and Steve made their way to the UK, Greg a Panther, Steve a Solihull Baron. 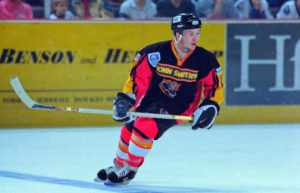 In 1996 Greg won a Roller Hockey championship winning medal playing for the San Jose Rhinos. Team mate, Mark Woolf mentioned that he was bound for the UK to play in their newly formed SuperLeague.
So Greg signed with the same agent, Mark went to the Ayr Scottish Eagles and Greg signed for the Panthers.
However, winning the Roller Hockey Championships delayed Greg’s arrival in Nottingham, he recalls;

I was a little late showing up,
I’d only ever spoken to coach Mike Blaisdell and didn’t do any research.
I remember going into the old rink and the rickety dressing room.
As the last man in, as a result the only spot left was a chair and
two nails for coat pegs! 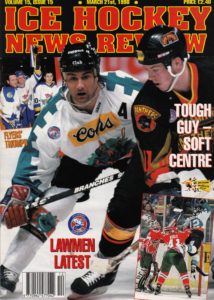 That season the Panthers finished 4th in the SuperLeague and made the Playoff Finals in Manchester.
Greg and the team were involved in the longest game in British Ice Hockey history against the Ayr Scottish Eagles. The semi final lasted a total of 115 minutes and 49 seconds and Greg recalls playing in that historic game.

Nottingham eventually won through to the play off final but were beaten 3 – 1 by the Sheffield Steelers.

The 2000-01 Panthers season was probably best forgotten, except for one game just 6 weeks into the new year.
Who doesn’t remember the Panthers – Steelers game of 9th February 2001, if not, it’s on Youtube here.
To say that Greg was simply “there” would be an understatement, he was an instrumental cog for all that was to follow!
After squaring up and taking exception to a cross check from Steelers D-Man Dennis Vial all hell broke loose.
Greg recalls;

He crossed checked me, I didn’t like that so I gave him a little hook.
As we were pushing and shoving my team mate Barry Nieckar came in
and took my place.
Once he got the better of him Steelers Scott Allison
left the bench to go after Barry.

Suddenly all hell broke out as the benches cleared and the players spilled onto the ice. It made the news everywhere, even back in Greg’s hometown of Vancouver!

At the end of the 2002 – 03 season Greg chose to retire from the game. Injuries had taken their toll on his body with persistent back and neck injuries over the previous 2 seasons.
As happens with age, the older you become the slower injuries take to heal.
So, at the age of 32 Greg returned home and began a new career in Vancouver as a fire fighter.
However he made sure he wouldn’t be soon forgotten, scoring the Panthers 100th, 500th, 600th and 700th SuperLeague goal.
Greg also holds the SuperLeague record for the most goals scored in a single game. He bagged 5 goals plus 1 assist in a game against the Bracknell Bees, including the OT game winning goal.
That season, 1998 – 99, he also finished as the SuperLeagues top goal scorer. 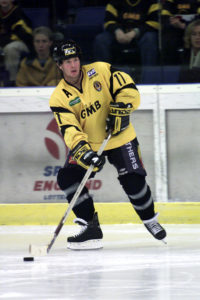 Before Greg returned home to Canada the Nottingham club decided to reward him for his services to the Panthers by retiring his number 11 shirt.
It was an award he didn’t expect, a total surprise, he recalls;

I did not expect that one bit, I was very honoured that they did that.
It was a huge, huge honour.

Watching his shirt being raised up, he felt it was a bitter sweet moment. In a 2009 interview with the Cats Whiskers Blog, he says;

When the Panthers retired my jersey it was bitter sweet.
Watching my jersey being raised up was a very proud moment for me and it was a very big honour.
On the other side I knew this was the end of my career as a Panther and a pro hockey player.

These days Greg is working for the City of Port Moody, a suburb of Vancouver, as a fire fighter and lives with his fiancee and daughters

Also, thanks, as ever, to all of my Patreon Patrons:
To:
Tommy Boll, Oscar Brownsword, Michael Cook, Colin Dunn, Sean Holland, John Hume-Spry, Jim Muir, Jim Murden, Jeff Povey,  Chris Saddington and Andrew Williamson.
Thanks for your continued support guys