Today’s hockey hero is former Durham Wasps, Nottingham Panthers, Solihull Barons, Bracknell Bees and Great Britain goal scoring striker Jamie Crapper.
While at Bracknell Jamie became the deputy rink manager. After hanging up his skates he moved to Bristol as General Manager of the Frogmore Street ice rink.
Whilst at Bristol he helped set up the junior hockey section and also the senior Bristol Bulldogs team. 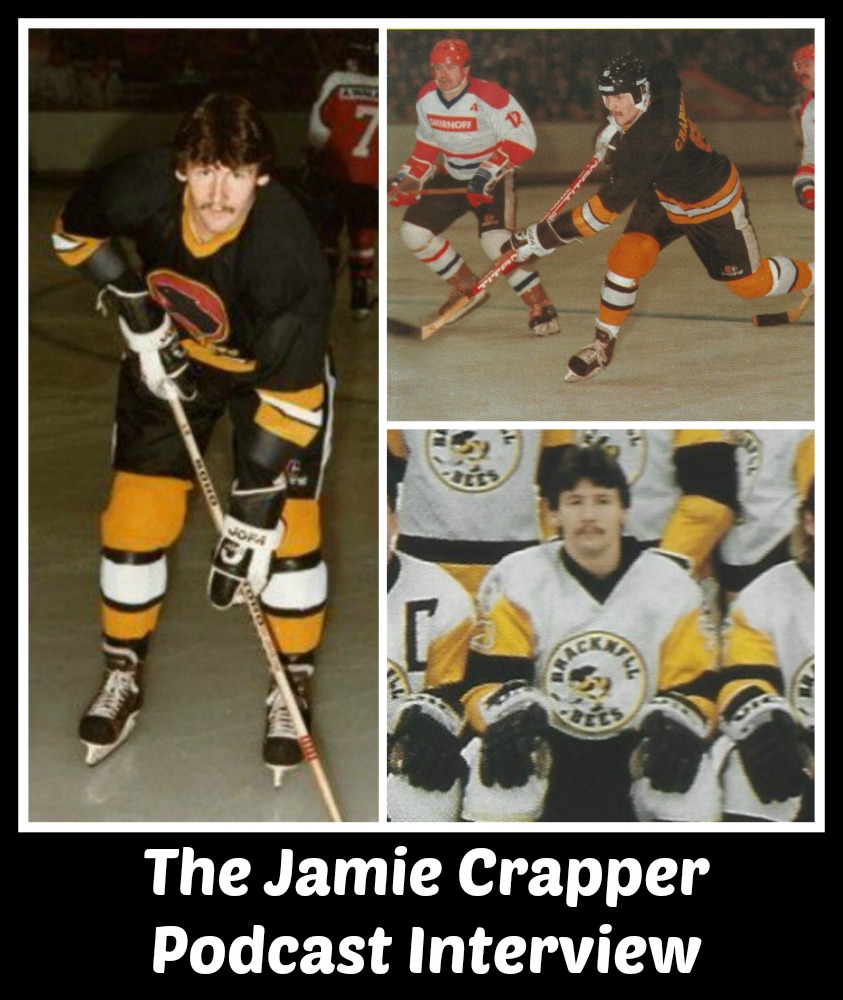 Originally from LaSalle, a small town in Ontario, Canada, Jamie spent 4 years at Ohio State University. It was his University connections that persuaded him to pack his kit bag and set off for Durham, England.
Jamie had previously played on the same Ohio State Buckeyes team with Durham Wasps imports Rod McNair and Paul Tilley.
The Wasps needed more firepower, so they decided to replace their import netminder with a goal scoring forward.
He was invited over to Durham and his UK hockey adventure began.

In his first season in Durham Jamie scored 61 goals with 44 assists from 30 games, helping the Wasps finish as league runners up.
The following season, with Mike O’Connor replacing Rod McNair, the Wasps did a League and Cup “double”. First they took the Autumn Cup by beating the Fife Flyers 6 – 4. The League Championship soon followed, the Fife Flyers again finishing as runners up. Jamie finished the season with 87 goals and had 76 assists from 40 games.

However, during the summer of 1985 the Wasps decided to release him and Jamie found himself looking for a new team. 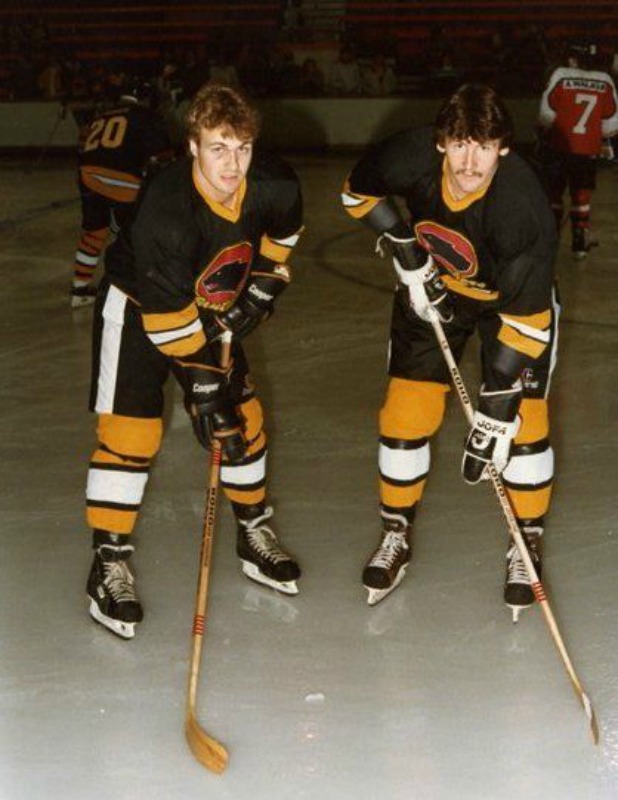 Alex Dampier had decided to move on, leaving his successful Murrayfield Racers team to become the new Nottingham Panthers head coach.One of his top priorities was to bring in a new Canadian goal scoring import and Jamie fitted the bill perfectly.
By the Panthers standards it was a successful season, the team finished sixth in the league and made the Playoffs. They also made the English final of the Autumn Cup, losing on aggregate to Jamie’s former team, the Durham Wasps.
The 1986 – 87  saw Jamie return to Nottingham, the team stormed through their Autumn cup group with Jamie scoring for fun.
However, in a move that shocked most fans, the club replaced Jamie with former Toronto Maple Leafs forward Fred Perlini.

Solihull had been promoted from the previous season, they had strengthened their squad with expensive British players and it hadn’t worked. The club had released a star import and had sacked their coach.
They were performing poorly and in financial trouble, their new players were deserting a sinking ship.
Jamie, unaware of these problems, signed for the Barons and decided to stick with it for the rest of the season.
By the turn of the year the Barons were bottom and in real trouble yet another coach had come and gone. Jamie became player coach and he guided them to Premier Division survival, by just 1 point above the relegated Cleveland Bombers. 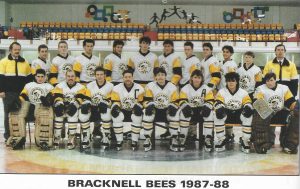 Multi millionaire businessman John Nike had began construction on a new ice rink and ski slope complex in Bracknell. He needed an experienced player or coach to build his new Bracknell Bees ice hockey team, Jamie fitted the bill perfectly.
In 3 seasons Jamie guided the Bees to promotion from Division 2 as champions. The following season, 1990 – 91, despite finishing 3rd in the league, they were again promoted. A tremendous effort in the relegation/promotion Playoffs saw the Bees take their place in the Premier Division.

Jamie’s final season in Bracknell, 1991 – 92, saw the team fighting hard to avoid relegation back to division 1. The team finished a disappointing 9th in the league, just 1 point above bottom placed Ayr Raiders. Once again the relegation/promotion playoffs beckoned.
Fortunately the Bees had the strength in depth, they fought hard and finished top of their group. Their Premier Division place was secured.
Despite playing 36 games, scoring 35 goals and 30 assists, Jamie decided it was time to hang up his skates.
During his time in Bracknell he’d been player-coach, player-manager and assistant rink manager – while also playing for GB too.

The Rank Organisation had closed down their Bristol ice rink on Frogmore Street. John Nike wanted to expand his business and so a deal with Rank was done. Jamie became its general manager with the brief to run the ice rink and watch over it’s £500,000 refurbishment.
At the same time planning permission was sought to build a brand new rink complex in Bristol, unfortunately, permission never came. 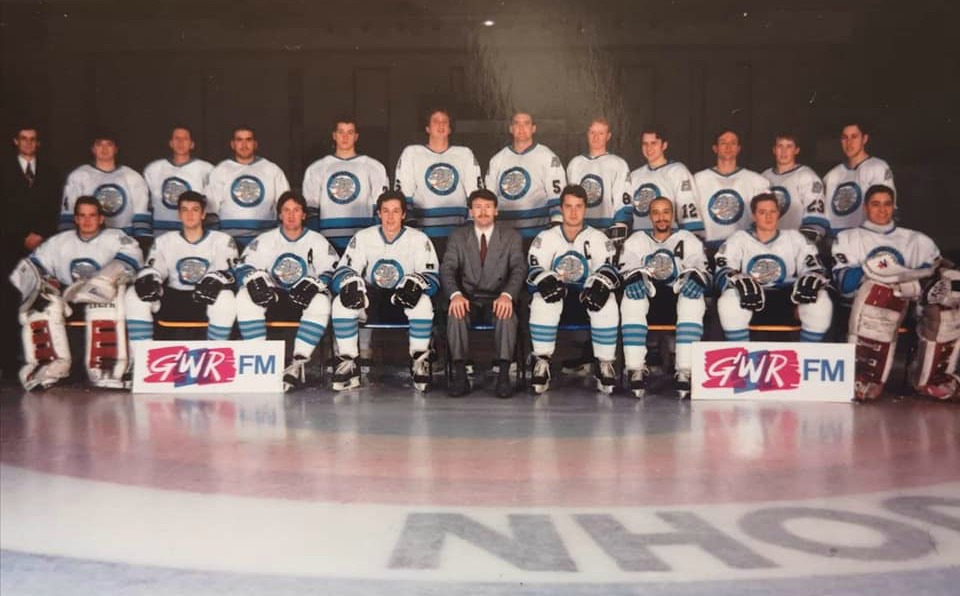 As general manager it was Jamie’s job to oversee the smooth running and health and safety of the rink. However he also wanted to create a strong junior section and senior team and so the Bristol Bulldogs were born.
Although the team lasted just one season players of the quality of Derek Higdon, Darren Matias, Robbie Morris, Lee Murray, Steve Francis and Player coach Lee Odelein were brought in.
The team competed in league division 2 and finished the season as group runners up to leaders the Solihull Barons. They had finished above well established teams such as Trafford Metros, Blackburn Hawks, Oxford City Stars and Sunderland Chiefs.

However, financially the team struggled. With crowds of under 400 per game and no sponsorship, at the end of the season, the team folded.
It was a moment in time that promised so much but faded just as quickly.
Jamie stayed in Bristol for seven years before deciding to pursue a career outside of skating. 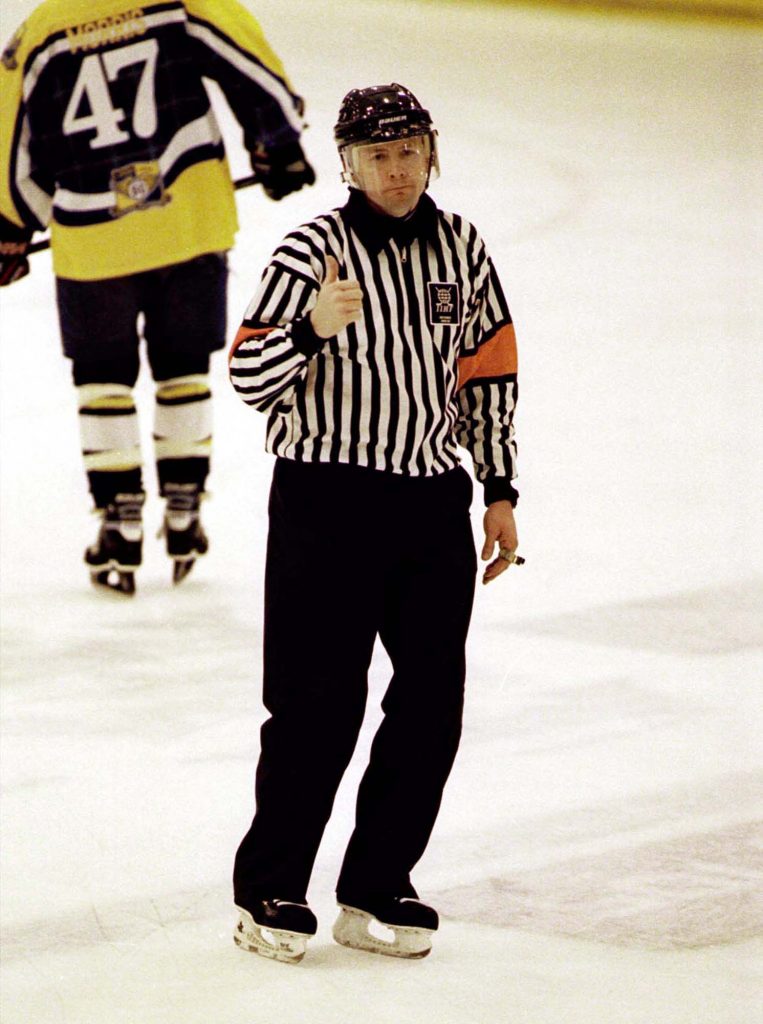 Jamie had already attained his level 3 refereeing certification before leaving Canada to begin his UK adventure. As a result, when the opportunity came along to resume his on ice officiating he didn’t need too much persuading.
Initially refereeing junior games he soon began officiating in division one and then moved upto the SuperLeague.
At the end of his first full season officiating he was awarded the BIHA’s Micky Curry Award for most improved official.
Jamie continued refereeing for 7 years before finally making the decision to hang up his skates again, this time for good.

Today’s shout out goes to “the Hotter One” who left a five 5 iTunes rating, he wrote;

“Memory Lane”
Amazing Podcast
Took me right back to being a youth in the early to mid nineties,
spending my weekends watching and idolising these guys.
Really good to hear from Tim Cranston, Ken Priestlay and Rocket Ron Shudra!`
Loved these guys so much.
Keep up the good work!

Second shout out goes to Jeff Povey.
In our “Favourite Memory” section of the Podcast Jeff recalls:

Most of my favourite hockey experiences took place
in HC Sparta Prague’s old arena in the Holešovice district of Prague,
before the club moved to Prague’s O2 Arena.

Jeff has been an Old Time Hockey UK Patreon Patron since day one.

You can also listen to Podcast interviews from Jamie’s Alumni of former team mates here: