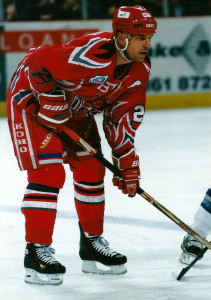 Born in Czechoslovakia, Ivan grew up in the late 1960’s, in a country ruled by communists. As a consequence “the state” controlled everything, including communication and travel.
Ivan was a young rising star of Czech hockey team Slovan Bratislava. Unbeknown to him his performances had caught the attention of a certain NHL team.

Right out of the blue, he was told that he had been selected in the NHL draft in round 7. The team who had picked him
was the then 2 time Stanley Cup Ice hockey Champions, the Edmonton Oilers.
Ivan had to decide to stay in a country that restricted his playing options or to follow his dream.
With the help of an intermediary, he followed his dream and slipped out of the country. He then made his way to Canada and the Edmonton Oilers, in effect he had defected to the West.

Having landed in Edmonton Ivan may have been forgiven for thinking that his problems were now over, however he was soon brought back down to earth with a bump, as Ivan explains in the Podcast:

I was dropped off at the hotel, I was alone, in a foreign country
and couldn’t speak a word of English.

The Oilers enrolled him in a language course and Ivan, with the help of TV and music, was soon able to communicate with the locals and more importantly, his team mates.

During the next four seasons the Oilers went on to win the Stanley Cup in 1987, 88 and 90. Unfortunately the talent of their team meant that Ivan was consigned to the farm team.

They had stars right through from first to fourth line and I didn’t get a look in. 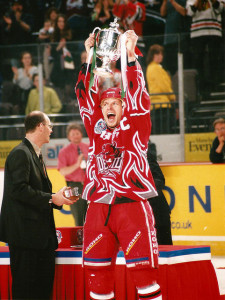 After battling back from a serious knee injury and having the tip of his nose sewed back on after an accident with an opponent’s stick, he decided to try his luck in Europe.

After spending a few weeks in Edinburgh with good friend and former Oilers D Man Mike Ware, new Sheffield Steelers coach Alex Dampier signed him for his South Yorkshire team.
In only his second Steelers game he found himself against fierce rivals the Panthers in Nottingham. He was about to learn about the two team’s fierce rivalry very quickly that night.

One of their younger players ran me, caught me off guard.
I may have had a concussion as I was skating around in a daze for most of the game.
However, from that game on I knew I wanted to stay and play in the UK.
The passion of the fans and players was just phenomenal.

However the following season he teamed up with his long time buddy Mike Ware in Edinburgh with the Murrayfield Racers.
Above all Ivan’s points tally greatly benefitted from the talents of the Racers star player Tony Hand. They’d first met at the Edmonton Oilers training camp a few years before.

Ivan then joined the Cardiff Devils, spending the next 6 seasons in the Welsh capital. He was a part of the Devils team that won the inaugural SuperLeague  Championship. ‘It’s still one of my proudest moments,’ he says.

In short Ivan would probably have chosen to stay with the Devils for the rest of his hockey career. However in 2002 the club suffered severe financial problems. They were put into liquidation and sent Ivan north to join the Manchester Storm. New Storm head coach, Daryl Lipsey, signed him as team captain.
As Daryl told me

Ivan was a super guy and a very good leader and captain.
We had a team which was under achieving but Ivan kept the team going in tough circumstances,
he’s a guy I had a lot of time for. 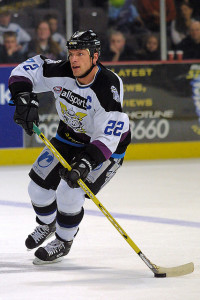 Although finishing bottom of the league table, the Storm rallied for the playoffs and made it to the final. With just 3 minutes to go were 3-2 up over the Sheffield Steelers.
However Ivan and his team were left broken hearted as the Steelers levelled the scores. Eventually Sheffield, after a scoreless OT took the Playoff Trophy on penalties.

With just 6 games into the 2002-2003 season the Manchester Storm were forced to fold. Ivan was once again looking for a new team. He found it in his beloved Cardiff, with the newly formed British National League (BNL) Cardiff Devils.

More upheaval was to follow at the end of that season when the SuperLeague itself went into liquidation.
The league was replaced by the current UK Ice Hockey set up, the Elite League. The Cardiff Devils, with Ivan, became one of its founder members.

Fast forward two years and after a season in Cardiff and a brief spell with Italian team Varese HC. Ivan decided that his love for playing the game had gone. Ivan simply no longer enjoyed the rigours of hockey life, especially the travelling. As a result he made the decision to “pack it in and call it a career”.
These days he lives in Vancouver with wife Kelly and children Lola and Colson. Ivan works in the car sales industry as a sales manager for a large Ford dealership in British Columbia.

You can listen to Podcast interviews from Ivan’s Cardiff Devils  and Murrayfield Alumni here:

If you’re enjoying the Podcasts I would really appreciate it if you would leave a rating, preferably a 5 star rating and a review on iTunes or Stitcher Radio.
Reading your reviews gives me a great boost, it’ll also help the Podcast get found by others.
You can read other reviews and even leave one yourself by following this iTunes link.