Jim Mollard hails from Stonewall, Manitoba in Canada. Before signing for the Murrayfield Racers he’d spent the previous 2 seasons in the Edmonton Oilers farm system.
Racers British forward, Tony Hand, had met Jim whilst trying out at an Oilers training camp a few years earlier.
So, when Murrayfield were looking for a new import forward, Tony called and offered him the slot. Jim had become disillusioned with the Oilers and so jumped at the chance to play his hockey in Edinburgh. 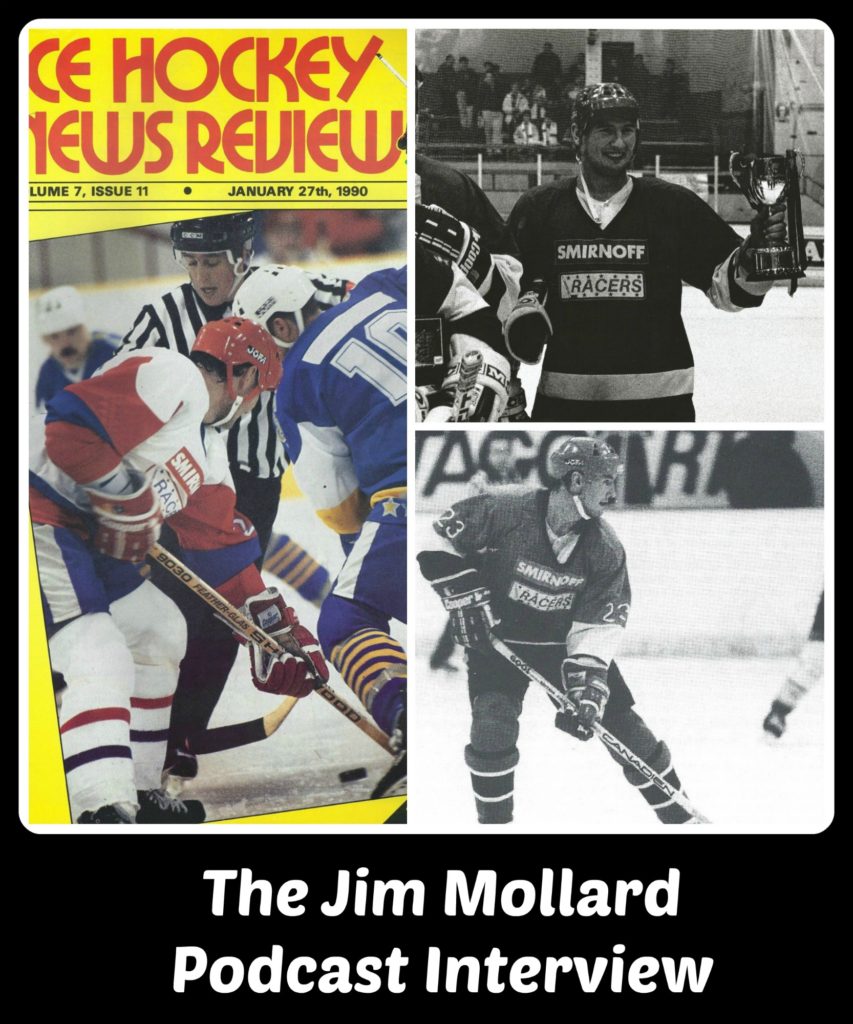 In the summer of 1989 Jim arrived in Edinburgh to join his new Murrayfield team. He’d joined a team bristling with British ice hockey talent. The Murrayfield Racers had finished the previous season as league runners up to the Durham Wasps. They were looking to go one better for the new 1989 – 90 season.
The team contained many talented British players. This included Tony Hand, Jock Hay, Scott Neil, Paul Pentland and goalies Moray Hanson and Martin McKay.
His fellow imports were reclassified D-Man Chris Kelland, forwards Brian McKee and Brian Meharry – later replaced by Steve Moore.

The Murrayfield Racers had finished the previous season as league runners up to the Durham Wasps. They were looking to go one better for the new 1989 – 90 season. 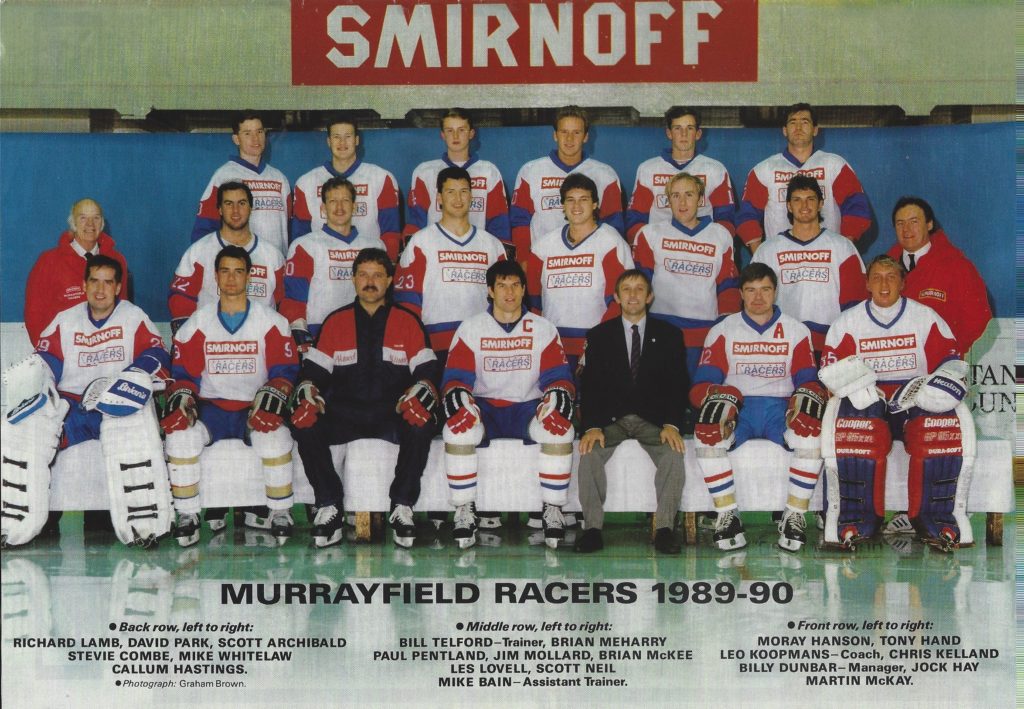 Hockey in the UK

Jim quickly realised that hockey in the UK was a little different to the game back home in Canada. As an import he was expected to ice for much longer shifts, sometimes he totalled 45 minutes a game! However it was a challenge he relished.
He also discovered how tough the league could be! In an away game in Solihull a punch from Barons import Jere Gillis broke his jaw!

I’d got a stick in the face earlier on in the game and then fought
Jere Gilles – he hit me right on the spot!
I knew there was something wrong,
I just thought it was bruised!

So, Jim went right through the week without treatment, he even played the following weekend! However the pain increased and a hospital trip confirmed he’d broken his jaw.
It meant a 6 week layoff as the team fought their way through to the Norwich Union Cup Final.
In that final the Durham Wasps awaited.

By the time the Norwich Union Cup Final came around Jim was once again healthy and rarin’ to go.
Jim played his part by helping to get Wasps star Import, Rick Brebant thrown out of the game! After just 9 minutes, a fight with Brebant and Chris Kelland erupted, both players were ejected from the game.
Here’s Jim’s account;

It wasn’t Chris Kelland that started it,
it was me!
I grabbed him from behind trying to get him to fight
but the linesman took me away,
that’s when Kelland came in.

Having Brebant, their star forward, thrown out, hurt the Wasps far more than the Racers loss of Kelland. Murrayfield went on to beat the Wasps 10 – 4 to win the Cup,  Jim played his part by scoring 1 + 2.
It was sweet revenge as the Wasps had beaten Murrayfield 11-5 in the Norwich Union Cup Final 2 years earlier.

Once again the Racers finished as league runners up, this time 8 points behind champions, the Cardiff Devils.
After finishing top of their playoff group Jim and the team progressed to the semi finals at Wembley. There they met the previous season’s playoff Champions, the Nottingham Panthers.
In a very tough game Jim scored the winning goal with just 26 seconds left.  They would go on to meet League Champions, the Cardiff Devils in the final in what
later would be described as the greatest Wembley Playoff final ever. 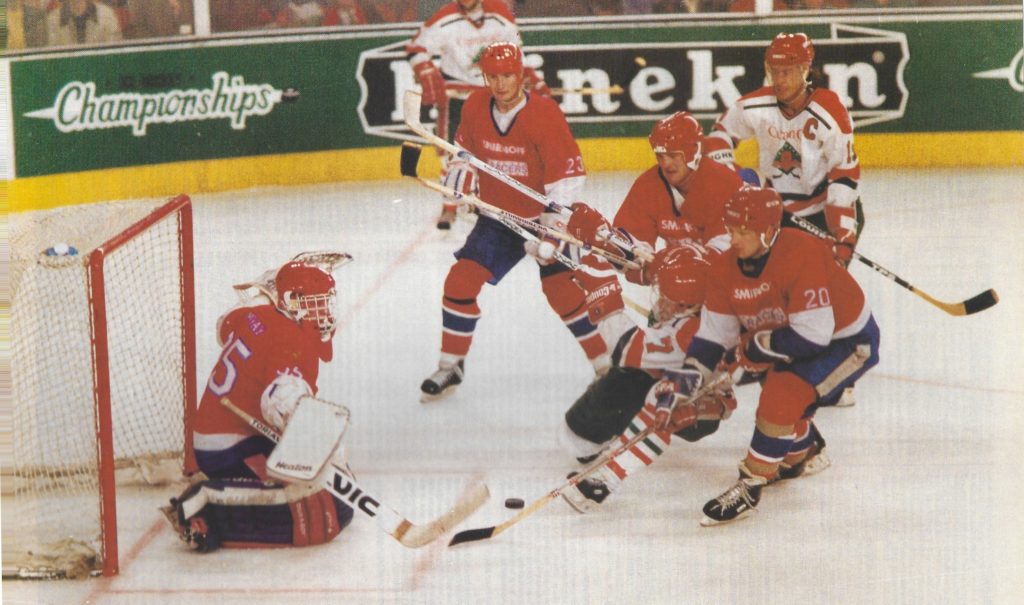 It was Cardiff’s very first Wembley final and they were firm favourites to win the game. It was Murrayfield’s 5th Wembley final in 7 years and initially their experience showed.
By the 16th minute of the first period the Racers had jumped into a 3 – 0 lead with Jim scoring twice.
However, by the end of the 1st period Cardiff had levelled the score, it ended 3 – 3.
Another 20 minutes, another Racers goal and by the end of the 2nd period, the score was
4 – 3.
In an eventful 3rd period the teams traded goals, with 6.21 remaining the Racers lead 6 – 5 and looked comfortable.
But then the plexi glass broke, the teams went off and Cardiff got a breather.
The game eventually restarted and with just 1.35 left in the game Devil’s Ian Cooper tied the scores.
Jim almost scored a second dramatic game winner in 2 days but for a brilliant save from Cardiff netminder Jeff Smith.

The game moved into overtime but remained scoreless and so moved on to penalty shots.
Ironically the 1st round of shots mirrored the 1st period of the game. First Cardiff went 3 – 0 up only to see the Racers score 3 to tie it up.
With 22 penalty shots taken the game was still tied, Cardiff had forced the Racers to score six times to save the game.
The 23rd shot was taken by the Devil’s Doug McEwan and he scored. Tony Hand stepped up to, once again, tie the game but this time Jeff Smith saved his shot.
The Wembley Playoff Championship of 1990 went to the Cardiff Devils.

Another season back in Edinburgh 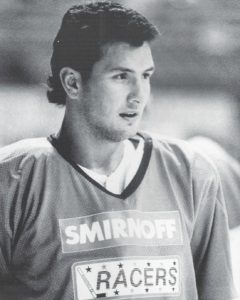 Jim returned to Edinburgh for the 1990 – 91 season hoping for another, if not better, season than the previous one. Unfortunately, financial restraints meant that it didn’t turn out that way. It didn’t help that the BIHA had rescinded Chris Kelland’s reclassified import status. Despite playing as a “Brit” the previous season Chris was once again a fully fledged import. Meaning that, compared to the other top Premier teams with their reclassified players, they were actually an import down.
Despite this the team once again made the Norwich Union Cup Final and again they face the Durham Wasps.
This time it was the Wasps who gained revenge, running out 12 – 6 winners. Their league form also suffered and their 4th place finish was a big disappointment.

On the plus side the team once again made Wembley where they met arch rivals the Durham Wasps in the semi final.
By the end of the 2nd period Racers fans were dreaming of yet another final, the team was leading 6 – 4.
However those dreams were quashed in the 3rd period, after spectacular 0 – 7 collapse saw the Wasps through 6 – 11.

The Racers did win some silverware when they beat the Ayr Raiders 9 – 4 to retain the Scottish Cup. Jim scored 2 + 3.
At the end of that season Jim returned home and retired from the game.

I’d like to give a massive shoutout to our NHS workers and all first responders
and essential front line workers
not only in the UK but right around the world too.
Guys you’re doing an amazing job
and
we salute you.