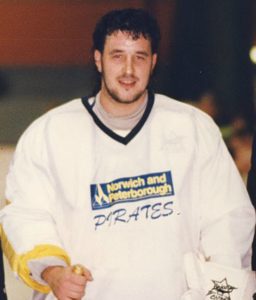 Then you get the call, you’re about to make your debut in front of over two thousand fans.
OK, so it’s a boyhood fantasy, a dream to play for the team you’ve always supported, it will never come true of course, will it?
Well, it did for a young Scott O’Connor, the 14 year old actually played a full game.
He was in his home town rink, in front of a full house of his own supporters.
Ironically it was to be his first and only game for the Fife Flyers.

Scott progressed up through the junior ranks and became the number one netminder for the second team, the Kirkcaldy Kestrals.
He spent two seasons with the Kestrals, playing with quality players like Scott Orban, Mark Mackie, Jim Lynch, Iain Robertson, Les Millie, Brian Kanewischer and brother Mike O’Connor.

By the end of his second Kestrals season and with a new Fife Flyers contract offered, Scott shocked everyone by signing for the Ayr Bruins, he recalls:

Jack Dryburgh left the contract with me overnight but a surprise call from the Ayr Bruins GM, Don Edwards changed everything.
Don was a former NHL goalie himself, for the Buffalo Sabres. The new Ayr Centrum rink was due to open the next season.
I just felt it was time to spread my wings a bit. 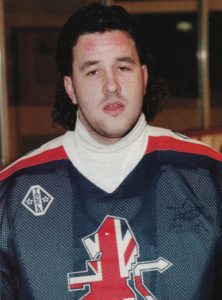 Scott signed as back up netminder to John “Bernie” McCrone but actually played 20 games, only 5 less than Bernie.
At that time Ayr had the worst facilities in the league, their Limekiln Road rink was small but the practice facilities next door were even smaller, he recalls;

The practice rink had no natural light and also no boards, just concrete walls, it was a bit cramped, but with Ayr’s quality imports I got plenty of  practice!

He explains what playing and training at the infamous Limekiln Road rink was like. Scott also talks in-depth of the influence that Bruins (and later Peterborough)  coach Rocky Saganiuk had on his career.
Scott also talks of his friendship with a certain Mr Gretzky, Keith that is, not Wayne.

At the end of his second Bruins season it was time for Scott to move on.

Rocky Saganiuk, had just been appointed as Peterborough Pirates coach and made Scott an offer, he recalls

I’d played more minutes than Bernie in the second year. I felt I was coming on, Rocky asked if I’d like to follow him to Peterborough as his starting netminder.
It all happened one Friday afternoon in Kirkcaldy, I was on the late train down to Peterborough, that was it, job done.

Rocky built a team to challenge for honours, with players like Dany Shea, Doc Durdle, Trent Kaese and Kenny McKie.
An amazing season followed, the team finished third in the league, made the Wembley Playoff finals weekend and beat the Cardiff Devils 7 – 4 in their semi final.
The Pirates faced the League Champions and B & H Cup winners, the Durham Wasps and although Scott and the team put up a valiant effort, it was not to be, the Wasps took the game 7 – 4  and with it the Grand Slam. 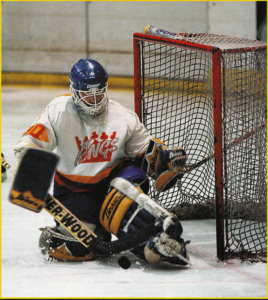 Scott chose to leave the Pirates at the end of his contract to join the Milton Keynes Kings.
Rocky Saganiuk had already departed Peterborough and the clubs financial problems had caused difficulties for the players.
It was a good move, the club gained promotion to the Premier League in his first season.
Unfortunately the Kings couldn’t maintain their progress in the premier, it all went wrong and the team were relegated at the end of the season.

Next stop was a contract with Mike Blaisdell’s Nottingham Panthers.
His first season was a big success and Scott admits that it was the highlight of his career.
The team finished fourth in the league, made the Benson and Hedges Cup Final and the Wembley playoff final,  losing out on penalty shots to the Sheffield Steelers.
Scott was labelled as the Panthers most important signing of the season, it earned him a two year contract extension.
However it all changed the following season with the start of the new, unlimited import, SuperLeague. 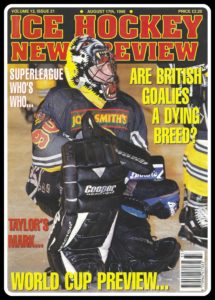 The 1996 – 97 saw the start of the no import limit SuperLeague, despite Scott’s success of the previous season Mike Blaisdell opted to go with an import starting net minder.
Scott found himself as back up to import Trevor Robins and played just thirteen games that season and 21 games the next season.
He openly admits that a lack of games and ice time badly affected his confidence;

I was at my best when I was playing regularly.
You could go two weeks without playing and my confidence went south pretty quickly.
The atmosphere had also changed within the room from the previous season, all of a sudden the Brits were in the minority!

In the summer of 1998 and with his Panthers contract up, the Peterborough Pirates coach Troy Walkington persuaded him to return to his former club.
Unfortunately the return didn’t go to plan, in only his second game back, away to Basingstoke, everything that could go wrong did, the bus they’d hired had to be replaced, they arrived late to the rink and took to the ice without any warm up.
The Bison were three up within the first 190 seconds.
Coach Walkington immediately sent on the back up net minder to replace him, Scott explains what happened after the game;

I telephoned my wife and told her that was it, I was finished, I couldn’t do it anymore.
I knew that that was me done.
It was the last time I put equipment on.

Scott was only 28 years old, in my own opinion it was way to soon, British Ice Hockey lost a very talented net minder.